Why did Lal look the way zhe did before completion?

As you can see in the picture below, Lal looks quite peculiar. This was, of course, before zhe1 became a she. My question is: why did Lal look like that when incomplete? Is this a sort of layer beneath skin or something like that in Soong-type androids i.e. the skin is like clothing for the different parts of the body? 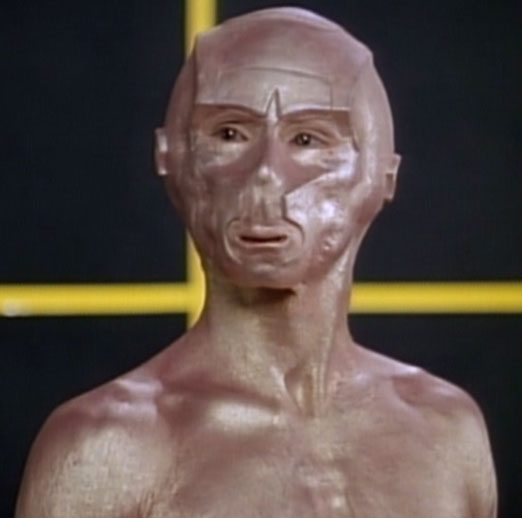 If you're looking for a canonical answer, then I don't think you'll find one. However, fro a designer's perspective there is an answer.

Lal's function, a robotic offspring of data was pre-defined but the form was not. Until the final decision on gender could be made Data created a "default skin" for his project that was (perhaps) deliberately androgynous to allow Lal the freedom to choose. The appearance (which was a choice of the make-up and prosthetic artists more than "Data") was devoid of any characteristics one way or the other which supports that theory.

Designers in many fields often get the inner workings (function) working before settling on the appearance (form) that will be the final "release" version. Software development, web development and electronics often take this approach, and the same could be said for robotic development - function is more important and only the key aspects of the performance are included in the design criteria. Data wanted to create an "offspring". The gender was immaterial to him so he allowed his creation to make that decision for itself then focused his efforts on creating an appropriate "skin".

Can't help but notice the slight similarity between the pre-gender Lal design and a certain shiny gold robot from the Star Wars franchise though...

16
Did Worf not serve in Starfleet before? Why would he dispute Picard's order?
7
Did Starfleet Research departments try to make use of Data's experiment to produce another android (Lal)?
21
Why didn't Data's freedom apply to Lal?
13
Why did people think Data was a Frenchman?
4
How long did it take Data to build Lal?
7
Why did Data call the French language "obscure"?
13
What did Data throw in the fire?
13
Why did the Enterprise drop out of warp before reaching Bersallis III?
5
Why did the crew treat Data this way?
1
What exactly caused Data to get angry in "Descent" before the emotion chip?