On my most recent playthrough of Portal 2, I couldn't help but notice something. 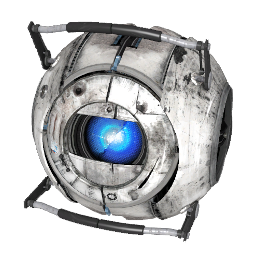 We all know him, right? But I noticed, that's not what he looks like at the start of the game. 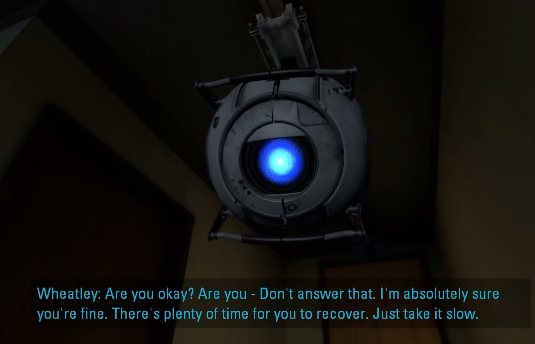 Notice how his blue "eye" is not cracked here! In fact, it's only after GLaDOS grabs him when you've woken her up that his eye breaks. Could this be the reason for Wheatley's corruption? What other implications could this have? Is Wheatley really to blame?

This doesn't seem likely. GLaDOS later reveals that Wheatley was an intelligence dampening core, designed to slow her down by feeding her a constant stream of bad ideas which she would have to process before rejecting. Wheatley's personality does appear to change once he takes over from GLaDOS, but this I suspect is a natural consequence of his stated function.

So, faced with the problem of GLaDOS being out of control, his suggested solution is to replace GLaDOS with Wheatley because this is a really bad idea. Wheatley is not really being evil, just following his programming. Wheatley is presumably completely unaware that he is programmed in this way. After he takes over, Apeture starts falling apart precisely because every idea Wheatley has for fixing the problems in the facility is a bad one (much like the turret crates).

Note especially that Wheatley's initial "help" with progressing through the complex is invariably useless or harmful, which seems to support GLaDOS' claim.

His power craziness post insertion probably comes from a similar place. His programming relies on him not questioning his most stupid and harmful ideas, so it's hardly surprising that his tendencies towards meglomania come to the fore. Also, there seems within the Portal universe to be a strong suggestion that power is a huge corrupting influence on AIs. GLaDOS, for example, is much more bearable in her potato powered incarnation, but with the exception of her treatment of Chell, shows no inclination to rein in her crazed ways once restored to control of the facility.

So to summarise, Wheatley's personality probably doesn't change throughout Portal 2. His actions are rather logical consequences of his initial programming as a "bad idea bear" and the limitations of Aperture's AI technology, which seems to tend to the megalomaniacal in any case.

It’s also noteworthy and forgive me if I didn’t catch this on my way down to the answer box but I believe GLaDOS has a line where she explains what happens when hooked up to the main computer.

GLaDOS: The body he’s squatting in - MY body - has a built-in euphoric response to testing. Eventually you build up a resistance to it, and it can get a little… unbearable. Unless you have the mental capacity to push past it.

This also seems to have an effect since parameters in the main computer could be sending him streams of thought that make him want to test and lose his shall we say humanity.

The power corrupted him!

As you notice, GLaDOS is much more likable when attached to the potato, because she has no power. Similarly, Wheatley became corrupted through the power of being in control over the facility.

The crack in his eye was mere coincidence (or maybe a hint to his change) which was caused by GLaDOS grabbing him.

Wheatley is just incompetent at the beginning, but also kind (he tried to help Chell escape). He, and the others like him, were designed to impede/control GLaDOS with their bad ideas.
After he plugged into the larger AI, he was strongly compelled to perform scientific experiments which he clearly and quickly became addicted to.
Remember; he tried moving the experiments closer to him so he would get a bigger rush from it.
So, to answer your question, Wheatley was corrupted by GLaDOS's programming.

I'm pretty sure that's not Wheatley staring at you in the GLaDOS tests, because remember, his eye cracked after he got crushed by GLaDOS, and that was before all the GLaDOS tests.

True, but in the Core Transfer, it clearly states that GlaDOS is the corrupt one. 80%, to be exact...but it never truly tells you how corrupt Wheatley was initially. But going off the boss battle, he is only 25% corrupt at the point of you attaching Space Core. So, was he corrupt from the start? Yes. But a traitor? Doubt it.

Possibly. Even though the evidence points to "No", in one of the music tracks where Wheatley is in control, Wheatley's antagonist theme plays several times (Dun dun dun DUUUUUN). This also plays in the music track, while you are confronting GLaDOS. This possibly means that Wheatley was evil BEFORE he was plugged in, and the mainframe just made it worse. That, and several times, you can see Wheatley staring at you in GLaDOS tests. The wall panels are quick to block him when you see him, which may mean he's SPYING for GLaDOS.

No! I've,played portal2 20x through. Wheatley never did have many good ideas, but they weren't stupid... After GLadOS breaks him, did any of you notice how he twitches? GLadOS makes it worse. Wheatley no longer thinks he just does the first thing coming to mind. GLadOS IS THE ONE WHO BROKE HIM!

user26500user26500
1
2
Add a comment  |
Highly active question. Earn 10 reputation (not counting the association bonus) in order to answer this question. The reputation requirement helps protect this question from spam and non-answer activity.

Not the answer you're looking for? Browse other questions tagged portal portal-2 or ask your own question.

12
How was Chell picked?
6
Does it occur to GLaDOS that the Black Mesa incident was a great achievement?