At 1:36 in Return of the Jedi (on my DVD, at least) there is a scene in which rebels on Endor are surrendering to Imperial forces. One of them appears to be wearing scout trooper armor without a helmet. When did this happen?? Prior to the Imperial reinforcements, the rebels were being sneaky, but did not use subterfuge. Can anyone explain it?

The chap wearing the armour is Nik Sant (AKA 'Gramps'), one of the Endor Strike Team who assaulted the base. 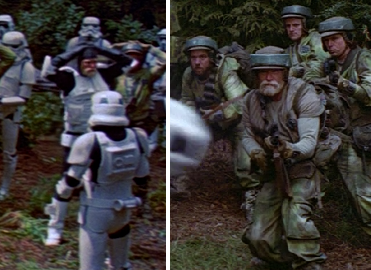 The armour belongs to the imbecile pictured below, listed as "Unidentified Scout Trooper" in the credits but almost certainly played by Peter Diamond who also portrayed a Stormtrooper, a Death Star Trooper, a Snowtrooper, a Scout Trooper and a Rebel Commando.

It may interest you to know that the film's novelisation states that the hapless stormtrooper was rendered unconscious rather than being killed:

Back at the bunker, the last scout was undone. Subdued by Chewbacca, bound, stripped of his suit, he was being carried into the woods now by two other members of the strike team.

Leia peeked inside. No sign of life. She motioned the others, and entered the bunker. Han and Chewie followed close on her heels. Soon the entire team was huddled inside the otherwise empty steel corridor, leaving one lookout outside, dressed in the unconscious scout’s uniform. Han pushed a series of buttons on the inner panel, closing the door behind them.

It may also interest you to know that in a bonkers retcon, this character is tangentially confirmed to be Rex, a clone trooper from Star Wars Rebels

"…I think the one thing I have really thought about is I really do think that Rex is that guy on Endor. I really do. Why else is there a bearded old guy on Endor, Tano? Why? It makes no sense. If you don't want that to happen, do you know what that means? I'm gonna make that happen. I'm getting like Palpatine, I'm getting power crazy."

To answer this which was not directly answered in earlier answer: One of them appears to be wearing scout trooper armor without a helmet. When did this happen??

Rebel disguising himself as a scout trooper happens when the rebels enter the bunker after capturing 'Unidentified Scout Trooper' at 1.29. As they do this, behind Han, Leia etc you can see a person dressed as a Scout Trooper (by Han's leg) standing at the doorway facing outwards, adjusting his helmet as he pulls it on - presumably a rebel waiting at the doorway in case any other Imperials turn up. I have attached the closest picture to this I could find online, where you can see the rebel\trooper waiting behind the main characters, but watching the film you'll see it much more clearly including the adjustment of the helmet. 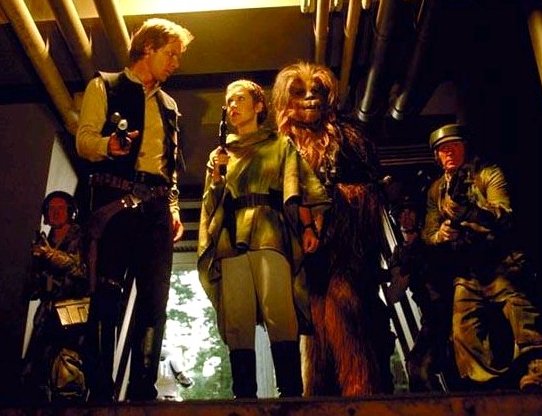 Old clone troopers who had defected from the empire and at some point in time have joined the rebellion to restore the republic. One of them can now possibly be captain Rex. With the events from Rebels being canon and you see in the trailer Rex and a few aged clone troopers it makes sense to have them join the fray for restoring their beloved republic and this little thing Lucas did to save money with extras has played Perfectly into that storyline. And if you check out the trailer of Rebels season 2 you'd see that they look the part. How fitting that a few clones who defied order 66 got to participate in the battle that ended the Sith Lord that had manipulated their destiny from the moment they were bred.

At the end of the Star Wars Rebels show, Sabine mentions that Captain Rex helped during the Battle of Endor. So perhaps the rebel soldier who dressed as the Biker Scout was Captain Rex... It all comes together.

4
Who exactly is this Rebel Trooper?
46
What was the point of the stormtroopers' armour?