I'm trying to find a book I very vaguely remember from when I was a kid in grade school in the 1970s. I assume it was a children's science fiction book, probably the 4th-6th grade reading level.

May have been illustrated with stippled pen and ink drawings.

The story took place on Mars (or perhaps Venus) where the inhabitants are plant-like, with a bulbous head and stalk-like limbs, rather like an inverted tulip bulb, and move with graceful motions of the limbs.

I believe the story had to do with explorers landing on the planet, meeting the natives and then finally having to escape from a natural disaster.

I know, it's thin. I would appreciate any suggestions.

The suggestion of The Angry Planet is close, very close, based only on the dim memories formed when I was 8 or 9. If it's not The Angry Planet it must be some derivative work. To find out, I've ordered a 1946 copy via Amazon. I'll let you kind folks know when I have it in hand. Hopefully by then I will have enough rep. points to comment directly.

Thanks to this site my memory was also jogged in an unrelated discussion of The Ice People, which I have also ordered.

I'm trying to find a book I very vaguely remember from when I was a kid in grade school in the 1970s.

First science fiction book I ever read (as a kid in the 1940s), John Keir Cross's The Angry Planet, subtitled:

An authentic first-hand account of a journey to Mars in the space-ship Albatross, compiled from notes and records by various members of the expedition, and now assembled and edited for publication by

from manuscripts made available by

the illustrations are by

(Stephen MacFarlane is a fictional character in the book; Cross and Jacques are the real author and illustrator.) This was the first in a series of two books, Cross's Angry Planet series; the sequel was SOS From Mars (retitled The Red Journey Back for the U.S. edition): A first-hand account of the second and third Martian expeditions by the spaceships Albatross and Comet.

David Drake has a nice review of The Angry Planet on his web page.

I assume it was a children's science fiction book, probably the 4th-6th grade reading level.

The back cover of my copy (U.S. edition by Coward-McCann) has a list of "Adventure Books for Boys and Girls".

May have been illustrated with stippled pen and ink drawings.

It does have black-and-white illustrations.

The story took place on Mars (or perhaps Venus)

The main action is on Mars (not Venus), though the story begins and ends in Scotland and includes two voyages across interplanetary space.

where the inhabitants are plant-like, with a bulbous head and stalk-like limbs, rather like an inverted tulip bulb, and move with graceful motions of the limbs.

That's how they are depicted on the cover of the U.S. edition. Here is a description from the book (U.S. edition, as you can tell from the spelling):

There was nothing, in the whole range of our experience as living beings on earth, to which they could quite be compared, although in general shape they were not unlike human beings. They were small, varying in height from 4 to 5 feet—their leader, to whom I have already referred as the tallest, was about 5 feet 6 inches. Their bodies were slender, smooth and round; in general dimensions comparable to the trunk of a medium-sized silver birch on earth. In color they were, in general, yellowish—a dark, patchy yellow ochre; but this deepened to green towards the foot in most cases, and sometimes merged to a fleshy pink and even red at the top. At the top, this trunk of theirs, as I have called it, bulbed out slightly into a head (I am, in this description, forced to use analogous human terms—"head," "trunk," "hands," and so on; but, as you will see later, the Martians are quite different from us—the words are used only as equivalents, for the purpose of building up some sort of image, however imperfect, in your minds). This "head" was covered, on the rounded top, with a sudden fringe—a sort of crown—of small soft tufts of a vivid bright yellow color. Just below this, on the front—the "face" (although strictly speaking the Martians, as we decided later, had no faces—or rather, their faces were these tufts or crowns on the top that I have described)—there were three, sometimes four, sometimes even five, small jellyish bulbs—glaucous protuberances which glowed transparently. These were the eyes. There were no organs of hearing or smell—at least, in that first glimpse we could see nothing that might be an ear or a nose; we found out later, as we shall describe, that the Martians had a highly developed sense of smell, although they could only "hear" sounds of considerable loudness.

I now come to describe the "feet" and "hands" of the Martians. At the lower extremity of the trunk—the greenish part I have mentioned—the body suddenly bifurcated. Each of the forks split again almost immediately, and so on and so on, so that on the ground, at the foot of each figure, there was a perfect writhing mass of small, hard, fibrous tentacles. About a third of the way up the trunk, in the front, there was another sudden branching of similar "tendrils," as I might call them—only these ones were longer and lighter in color and seemingly more sensitive. These were obviously the "hands," since they held, in their twining grasp, the Martian weapons—long spears, or swords, of some bright transparent crystalline substance—a sort of flinty glass, as it seemed. Finally, to complete this sketch of the appearance of the Martians, there were, just under the bulb of the head, and on each side of the trunk, two smaller clusters of tentacles (or "tendrils," as I really prefer to call them). These were very short and slender, and light green, almost white in color—like small pale sea anemones.

I believe the story had to do with explorers landing on the planet, meeting the natives and then finally having to escape from a natural disaster.

Yep. The two men and three stowaway children take off from Scotland, land on Mars, meet the good Martians (the Beautiful People), fight alongside the B.P. against the evil Martians (the Terrible Ones). The battle is going very badly, and then things get worse:

Simultaneously the sky, which up to now had been blue and pellucid above the scene, grew suddenly dark, and a great gust or wave of heat seemed to rush in the air all round us. And from the top of the biggest of the mountains which overhung the city there poured a sudden fountain of flame.

"My heavens!" yeled Mac, white and staggered in the the unexpected gloom, "it's an eruption! Lord help us, Steve—the volcano!—the volcano!"

How to describe the terrible scene that followed? The lava, sizzling and bubbling as if it were alive, poured into the doomed city. As it lapped round the bases of the great domes, one by one they seemed to melt and sink into nothingness—immense shining bubbles, red in the reflected light, subsiding and vanishing in the tide. Contorted figures, caught in the molten fingers of this implacable beast—Beautiful People and Terrible Ones alike—poised for a moment in a brief agony, and then sank into the stream. The dreadful liquid crept and oozed over the entire floor of the city—the saucer of the valley became a seething cauldron—a vast and terrible witch's brew.

Could it be C.S. Lewis's Out of the Silent Planet? The art on the cover seems to fit your description. The story does involve the main character attempting to get home from Mars before bad things happen.

The martians aren't plants, but the local flora is described as being exceptionally tall and thin due to the lower gravity. 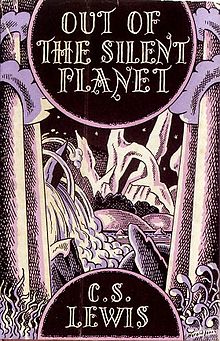 Sounds like it could be Red Planet by Robert A. Heinlein.

At a rest stop, Willis wanders off and encounters one of the adult sentient Martians. The three-legged alien takes the two boys and Willis to join a ritual called "growing together" with a group of its fellows. They also share water, making Jim and Frank "water friends" with the Martian, who is named Gekko. 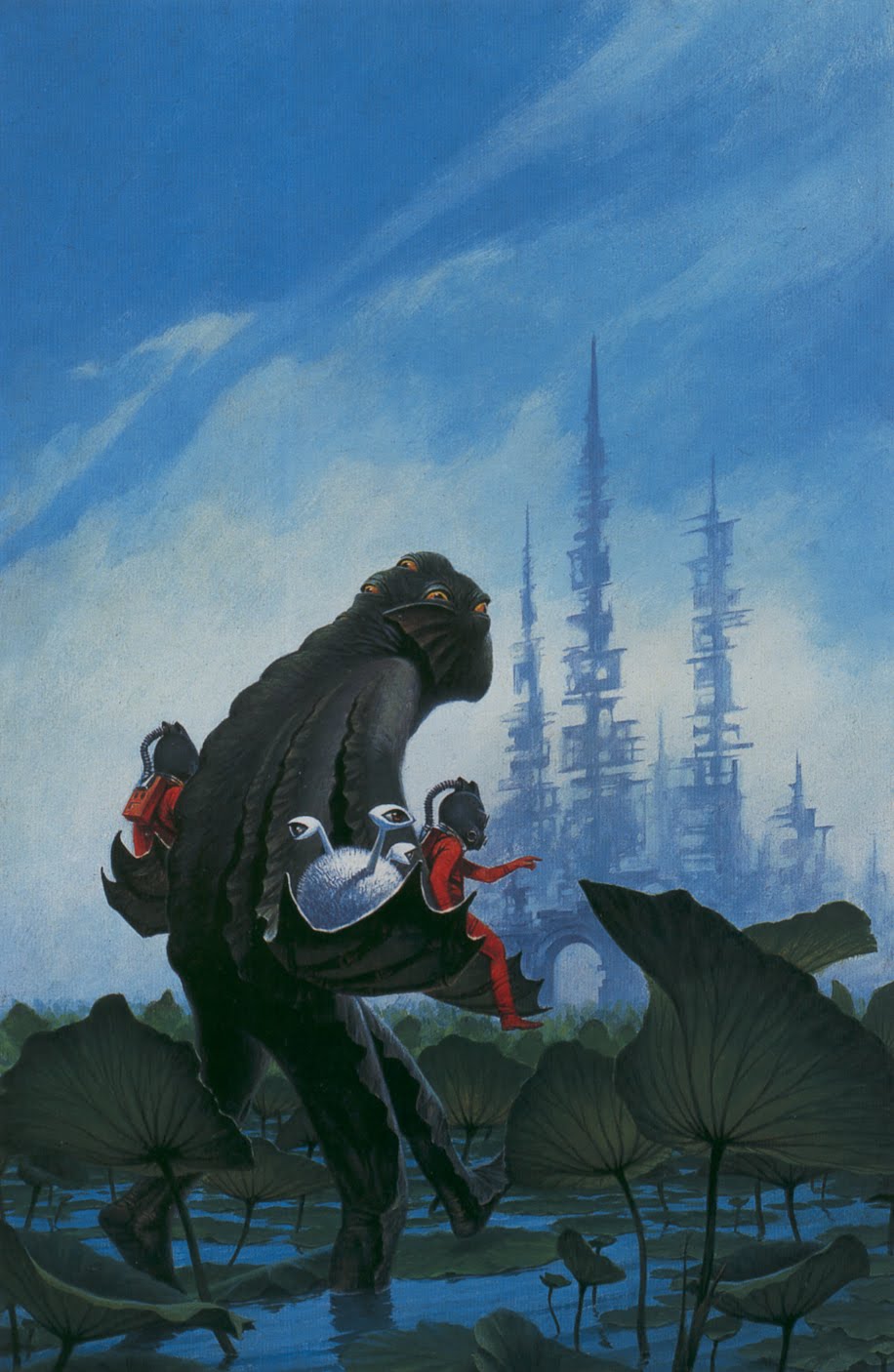