Is there any story with anthropomorphised animals that tries to be somewhat plausible? [closed]

I am looking for interesting books or short stories that try to give a reasonable explanation for the existence of talking, gun-shooting, vehicle-driving animals. Something like uplift, or convergent evolution, or selective breeding. If not, a simple, fun, action-packed adventure would do.

The graphic novel WE3 by writer Grant Morrison and artist Frank Quitely is pretty interesting and plausible and rather close to what you are asking.

The story follows the journey of We3, a squad of three prototype "animal weapons," as they flee captivity. The group consists of a dog, "Bandit" a.k.a. "1"; a cat, "Tinker" a.k.a. "2"; and a rabbit, "Pirate" a.k.a. "3", who were all kidnapped from a nearby city and encased in robotic armor. They were also given a limited ability to speak through skull implants. Their body armor fields numerous weapons, including mine laying devices, machine guns and razor claws.

As personal opinion goes, I loved it. It feels real and terrible and sad and works as a commentary on control and abuse of power. Highly recommended.

The GN consists of a three-issue miniseries, and all three covers were great, but cover number one really got to me. The right combination of illustration and photo-realism that is hard to achieve: 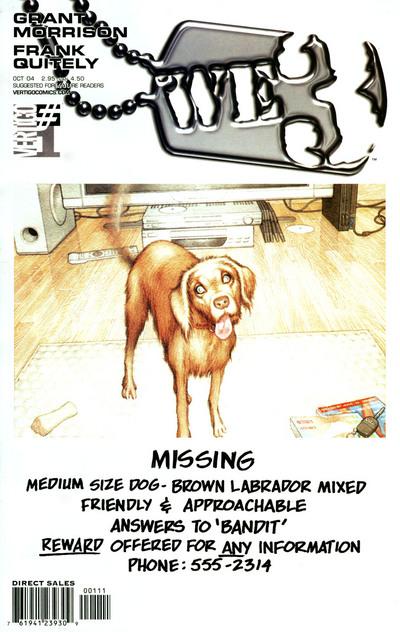 Not the answer you're looking for? Browse other questions tagged animals or ask your own question.

13
Do the other animals that students can bring with them to Hogwarts have special skills?
47
Why are there no animals in “The Matrix”?
4
Is there any organization that would hunt force sensitive animals?
8
Searching for a story about a Team of Explorers Trapped with Large Alien Animal
8
SF story with a talking bull getting even during a bullfight
5
What's this post-apocalyptic book with intelligent animals?
5
2000s cartoon about a group of people interacting with animals, a man turns into a firefly; a logo helps the transformation