Why is Oceania only at war with one other nation?

Eastasia and Eurasia have both, at times, been at war with both other nations. Oceania, however is always at war with only one. Why is this so?

To quote directly from the book,

The war, therefore if we judge it by the standards of previous wars, is merely an imposture. It is like the battles between certain ruminant animals whose horns are incapable of hurting one another. But though it is unreal it is not meaningless. It eats up the surplus of consumable goods, and it helps to preserve the special mental atmosphere that the hierarchical society needs. War, it will be seen, is now a purely internal affair. In the past, the ruling groups of all countries, although they might recognize their common interest and therefore limit the destructiveness of war, did fight against one another, and the victor always plundered the vanquished. In our own day they are not fighting against one another at all. The war is waged by each ruling group against its own subjects, and the object of the war is not to make or prevent conquests of territory, but to keep the structure of society intact. The very word "war," therefore, has become misleading. It would probably be accurate to say that by becoming continuous war has ceased to exist. The peculiar pressure that is exerted on human beings between the Neolithic Age and the early twentieth century has disappeared and has been replaced by something quite different. The effect would be much the same if the three superstates, instead of fighting one another, should agree to live in perpetual peace, each inviolate within its own boundaries. For in that case each would still be a self-contained universe, freed forever from the sobering influence of external danger. A peace that was truly permanent would be the same as a permanent war. This--although the vast majority of Party members understand it only in a shallower sense--is the inner meaning of the Party slogan: WAR IS PEACE.

In the writings of Emmanuel Goldstein, we find some additional relevant information;

In one combination or another, these three super-states are permanently at war, and have been so for the past twenty-five years. War, however, is no longer the desperate, annihilating struggle that it was in the early decades of the twentieth century. It is a warfare of limited aims between combatants who are unable to destroy one another, have no material cause for fighting and are not divided by any genuine ideological difference.

Between the frontiers of the super-states, and not permanently in the possession of any of them, there lies a rough quadrilateral with its corners at Tangier, Brazzaville, Darwin, and Hong Kong, containing within it about a fifth of the population of the earth. It is for the possession of these thickly-populated regions, and of the northern ice-cap, that the three powers are constantly struggling. In practice no one power ever controls the whole of the disputed area. Portions of it are constantly changing hands, and it is the chance of seizing this or that fragment by a sudden stroke of treachery that dictates the endless changes of alignment. 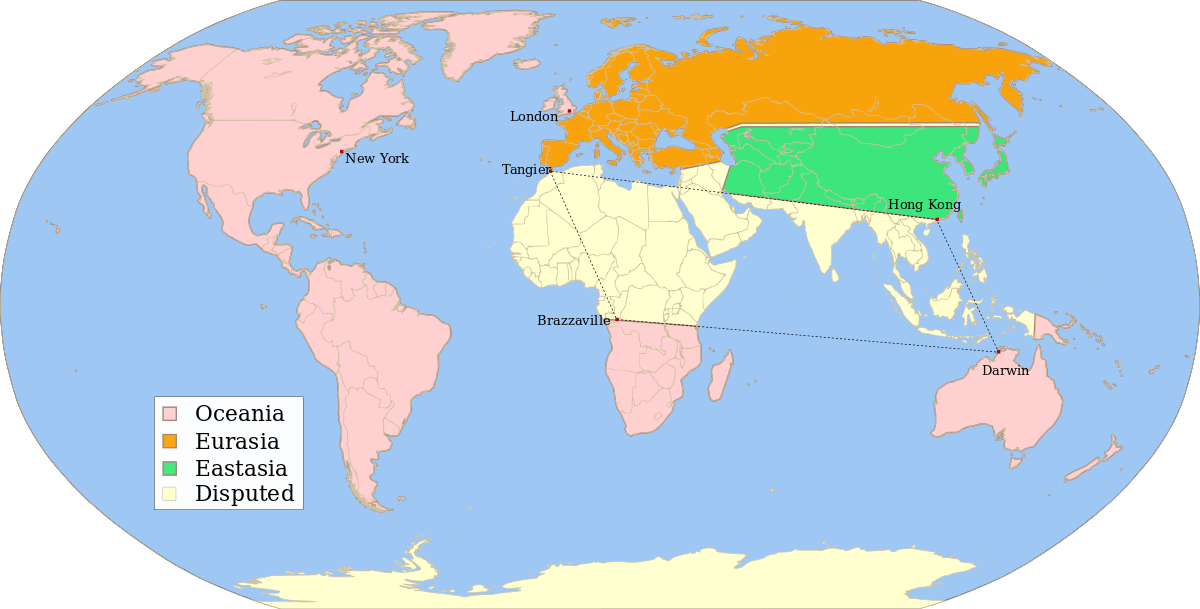 We don't really know if it has ever been at war with either if them. We don't even know if Eurasia and East Asia are two countries - or indeed if Oceania includes any more than just Britain. The point of the book is that the Party's power is absolute, and we simply don't know anything other than what they tell us.

It is probably just a coincidence.

According to Emmanuel Goldstein's book, there are only 3 political entities on Earth in the year 1984 in the book 1984. I will call them "countries" here, but they are more like empires or conglomerates. I'm not sure if we are ever told the explicit term for them, even in Newspeak.

These 3 countries are always at war with each other. The 2 times we are told which side is which, Oceania, Winston's home, is allied with Eurasia against Eastasia at first, then it switches sides to be allied with Eastasia against Eurasia (maybe those 2 are switched, I haven't read the book in awhile).

We don't know whether Oceania ever aligns itself against both countries at once, but it could have. The war has been going on for 25 years, according to Emmanuel, and it will probably go on forever, or at least a very, very long time, and with the Party constantly rewriting history, not many people would remember years later even if it did happen, and would have almost no way of knowing when alliances changed before they were born.

My point is, we only ever see 2 examples of the alliances in this war, and the book only lasts probably a couple months in what has, according to the most reliable source we have outside of Winston (which isn't saying much), already been a 25-year-long war and which may never end. Winston never says for sure any other times when the alliances shifted, probably because he doesn't remember and can't look the information up - even if he could, he knows it wouldn't be accurate. You seem to be trying to extrapolate from 2 examples to an entire endless war.

If you want to see the relevant quotes, @Richard's answer has some.

I actually don't believe Oceania extends beyond Great Britain. I have no reason to believe the details of Goldstein's book as the book was given to Winston by somebody plotting to vaporize him. I don't think there is a war on at all. I think the entire "war" as seen by oceanics, is a false flag operation.

The reality? North Korea is a hermit state whose economy has ground to a halt by modern global standards. It's allied tacitly and almost embarrassingly with China who in reality has zero support for the nation or its people. It's a tiny nation of lies and oligarchy.

Yet it believes it's in the middle of a Great War that it is winning.

This model is much easier to sustain than the one painted by Goldstein. Especially since there WOULD be times when Oceania would be at war with both Eurasia and eastasia. Since they'd eventually be allied with each other at some point.

Also per the past tense of the appendix, I think George was writing from the point of view of George Orwell. Using the past tense as writers do when they're finally effing DONE the book.

Not the answer you're looking for? Browse other questions tagged 1984 george-orwell or ask your own question.

12
Why didn't Winston know what Room 101 was?
10
Why does Oceania not want to achieve victory over Eurasia and Eastasia?
135
Why does the Party allow playing chess in Orwell's 1984?
11
Why Are The 1984 Ministries In London?
50
Why does the Party care to inform the people about the current war situation?
31
Why was Winston not afraid of being caught with Julia after he was released from Ministry of Love?
2
In Orwell's "1984," why did Winston take Julia with him to the meeting with O'Brien?
53
In Orwell's “1984,” what was the motivation of O'Brien, and other members of the Thought-Police, in spending so much time and effort on Winston?