For quite a while I've been trying to identify the name of an old cartoon / anime I used to watch as a kid during the 1980s (Canada / US).

I've tagged this as both cartoon and anime because I'm not certain whether it was of Japanese or American origins, but the various images I have seem to indicate it may have been at least an American adaptation of a Japanese show.

From what I can recall, the show seemed to revolve around the crew of a spaceship that could transform into a bipedal robot (à la Macross). In what I believe may have been the pilot, or at least an early episode, the crew encounters a couple of people who join the crew.

One of these people, I recall, asks excitedly whether they would receive shiny sheriff badges, to which the crew member replies that they wouldn't, but would receive something that looked like military service ribbons (something that looked like this). Also, I seem to recall the show had a somewhat "western" aspect to it (the sheriff badge, for example, and I recall seeing at least one character with a cowboy hat).

In a later episode, I recall the war which was apparently going on during the run of the show was over (which later turned out to be a ploy I believe). I have an image of the ship/robot being decommissioned. In this image, the ship is being held in a bay, "standing" upright (meaning the cockpit would be facing towards towards the sky), but it is still in its "ship" form (not robot form). Its "breast" plates are being forced open.

I also seem to think the ship was blue (if that makes any difference).

After looking around on Youtube and Wikipedia, I am beginning to think this show might be Robotech, and I've looked at various intro videos and episodes, but none of them ring a bell, and I cannot find the "decommissioning" episode either.

Does any of this sound familiar? If it is indeed Robotech, does anyone know of the "decommissioning" episode I mentioned?

Sounds like Saber Rider and the Star Sheriffs. From Wikipedia:

The main foe of Cavalry Command and the Star Sheriffs is a race of non-human creatures known as Vapor Beings (also sometimes called Outriders) that jumped into our dimension in order to conquer it. They attack the settlers, destroy settlements, and kidnap humans, in order to mine various metals or crystals from the soil.

Outriders are superior to humans in battle technology. They control a legion of gigantic robots with weapons greatly superior to the weapons and defenses of the space-going fleets of Cavalry Command. In response to the threat, Cavalry Command developed a prototype ship known as the "Ramrod Equalizer Unit" (or just Ramrod) that has the ability to turn from a spaceship into a powerful robot that can fight the Outriders on equal terms.

This sounds like it could be anything from Gundam Wing to Bravestarr. There were a large amount of cartoons that had similar elements.

I'm thinking that it could be:

There are plenty of others from that time, but I hope that this list helps to jog your memory.

I'm willing to put money on it being this Cartoon, Saber Rider. This was the American adaptation of a Japanese anime series. From the description of the episodes you remember, it couldn't have been Ninja Robots or Robotech. Here's a visual: 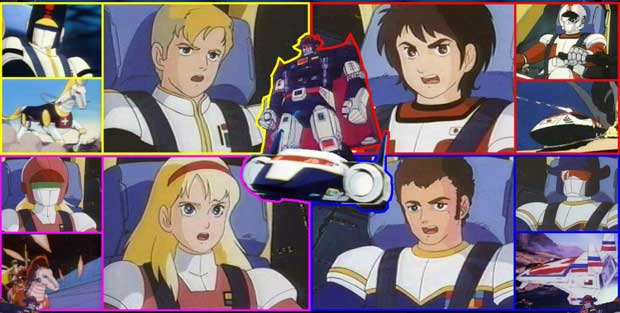 "For quite a while I've been trying to identify the name of an old cartoon / anime I used to watch as a kid during the 1980s (Canada / US).

I've tagged this as both cartoon and anime because I'm not certain whether it was of Japanese or American origins, but the various images I have seem to indicate it may have been at least an American adaptation of a Japanese show."

I remember this it is called Robotech macross :

13
Cartoon movie where the main character had a robotic arm
4
Old anime/cartoon where a spaceship turns humans evil
3
80s/90s Sci fi cartoon with artwork similar to Moebius', with a space journey atmosphere and a blue spaceship flying through the desert
9
Anime movie about space aliens and robots
4
2000s sci-fi cartoon show with a group of friends sucked into a console/TV to another dimension
8
Old cartoon with a red? robot in a desert and a girl
12
Looking for the name of an anime where the robot head is also an airplane
23
Trying to find a ship from an '80s cartoon