Is the Evening Prophet a separate newspaper or part of the Daily Prophet?

An answer to my last question said:

"There was also a mention of [an] Evening Prophet in Half-Blood Prince but it isn't clear if it's a real newspaper or just [the] Daily Prophet's edition."

Is it known which one is correct?

Per the latest release of information from Pottermore:

"There is only one wizarding newspaper in Britain, discounting such small circulation publications such as The Quibbler. The Daily Prophet, whose headquarters are in Diagon Alley, is delivered by owl on a daily basis to nearly every wizarding household in Britain. Payment is effected by placing coins in the pouch tied to the paper-owl's leg.

Occasionally (when something particularly interesting or exciting happens, such as the illegal flight of a Ford Anglia the length of Britain) an Evening Prophet edition will be rushed out."

In the films, the masthead for the Evening Prophet is also basically identical to that of the Daily Prophet. 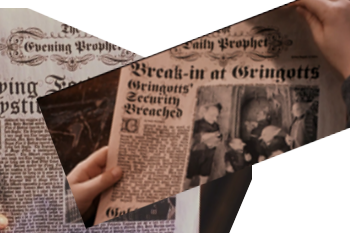 Notably, the pottermore website also mentions a "Sunday Prophet" and includes a small photograph on the same page. Since the paper is generally known as 'The Prophet' to the various characters, it's highly likely that any newspaper calling itself "The ...something... Prophet" would be connected.

According to Pottermore's "New Content from JKRowling" (Book4/Chapter18/Moment2 - Daily Prophet), it's the latter:

2
Is there a solid canon evidence that Sunday Prophet is an edition part of Daily Prophet?

10
Did anyone know who the Half-Blood Prince was (Before Book 6)?
2
Is there a solid canon evidence that Sunday Prophet is an edition part of Daily Prophet?
39
Why didn't Snape keep or secure his copy of Advanced Potion-Making?
5
Did Dumbledore suspect Rosmerta immediately after Ron's poisoning?
8
Who are all of these photographers?
17
Why did Snape commit his halfblood nickname to writing?
49
Why did Dumbledore accept Lupin's resignation?
11
In Harry Potter and the Half Blood Prince, how does Hermione recognise Veritaserum?