I wanted to re-read this but can't remember the title. I read it 10-15 years ago but don't know if it was new at that time. The plot centered on a human who had learned an alien technology that allowed him to build planets and be immortal. Another planet creator tries to kill him.

(edit) I don't remember the cover or author. It was at least novella length but I think it was a full stand alone novel. More specifics on plot as follows (IIRC):

The story begins on a planet he created for himself as a luxury planet responsive to his every whim. After recognizing an attempt on his life, he discharges a paid female companion and takes off in a private spaceship.

I recall that he was specifically human because it was a big deal that he had learned the technology as few or no other humans could master it. Mastering the ability required attuning oneself to what the aliens considered gods but there was debate as to their actual makeup (i.e. sentient "gods", accessing universal archetypes, etc).

He travels to talk to either his teacher or else some other elder masters to figure out who is out to get him. He then travels to a planet made by his enemy which turns out to be a planet sized personal trap. If I remember correctly his enemy was attuned to either a lightning or storm type god or archetype.

It isn't the Farmer novel noted below that that was a very good suspicion based on the limited stuff I originally posted.

How about Roger Zelazny's Isle of the Dead? I read it a long time ago, so I don't remember it all that well, but from online summaries and memory, it contains the following elements:

Sounds a bit like Farmers World of Tiers (specifically the first volume, The Maker of Universes, 1965), although the protagonist is not strictly human (but still humanoid) and his race built 'pocket universes' (which however usually included planets). At the beginning of the story he had lost his world building skills and, stranded on earth, had come to think of himself as human as a result from an attempted coup by a fellow 'universe creator'.

Some details sound a bit like Aristoi by Walter Jon Williams, although others seem a bit off (e.g. the planet-creation technologies are human technologies, not alien ones). Does the cover look familiar? 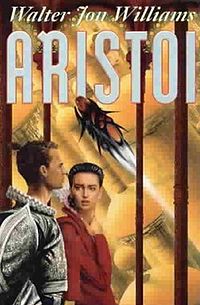 30
A short story of a guy on a strange alien planet
8
Short story about an immortal being who creates human body (and falls in love?)
5
Soldier becomes immortal due to honey formula
19
Looking for book - empathic/telepathic alien captured on distant planet, brought back to earth
7
Sci Fi Novel where alien commander raises dignitary's daughter and falls in love with her when she grows older?
11
Story of a man who is sole survivor of a crash landing on a planet with cities from extinct alien race
7
Book about a king who becomes immortal
21
70's/80's story about a high ranking prisoner of war on a prison planet