Film of human versus alien [duplicate]

It was a long time ago, so I remember only some particular.

The alien was something like an insect, and they were greater than human. The human was taking a bomb to the alien's home planet (I think), but somehow the alien get into the human ship and I remember the ending scene:

one man has a bionic eye, and looks for targeting the enemy world on a rod-like connection, but one of the man was a particularly small alien, and kills him pushing its head in the rod. The other man manage to pull the trigger, but in the end the alien wins, as the earth was on target

story-identification movie
Share
Improve this question
edited May 18 '14 at 19:05

The Light Brigade's purpose is to deliver this powerful weapon to destroy the enemy homeworld. Unfortunately the aliens ambush the ship, and use their unique methods to trick the survivors of the Light Brigade into failing their mission. This feat is achieved by Robert Patrick's character, John Skokes, whose physical likeness has been assumed by an alien spy, meaning the real Skokes never escaped captivity.

In the closing scene, at huge personal cost, the bomb is released over what the crew believe to be the alien homeworld. It is in fact Earth, and the mission is not only a failure, but the unleashing of the doomsday weapon on an already crippled humanity. 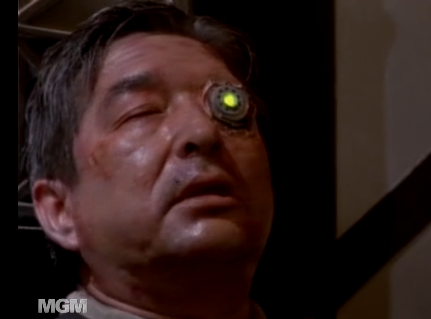 If you're in the US, you can watch it online here

7
Looking for the title of a sci-fi novel about an alien who crash lands on earth and the mysterious fuel required to restart her spaceship?
4
Aliens Invade and Enslaves Humans. Hero sends A-bomb thru transport to alien planet
9
80's/90's Live-action Sci-fi TV series: group of kids find an alien
13
Looking for a sci-fi movie in which a human astronaut befriends an alien on a reddish planet
10
Sci-fi Novel about human starship fighting alien starships with FTL “warp bubble” missiles?
11
SF Book: Alien learns to love smell of roses and human suffering
24
2000s space film where an alien species has almost wiped out the human race in a war
2
An alien desert film