Are there any Constitution class starships (refit or otherwise) still in active service during the time of The Next Generation, Deep Space Nine or Voyager series? I can not remember any appearing on screen in any of the shows, which seems odd since the ship was fairly versatile and strong on the front line.

There are at least three other classes of ship commissioned around the same time frame as the Constitution (or at least around the time of the refit), which we do still see in service in the 24th century (Excelsior, Miranda and Oberth); so there is no reason that the Constitution class couldn't have been kept up to date and in service as well.

While the decision was taken by the writers of TNG and subsequent series not to have any Constitution-class ships in the TV show, there were a couple of cheeky references that managed to slip through.

In TNG "Best of Both Worlds", you can clearly see (on the left of the image) the hull of a Constitution-class vessel in the wreckage at Wolf 359. The implication is that this ship was either in service or (more likely) pulled out of mothballs for the futile defence of Earth.

Although the shots show two different hull sections, behind-the-scenes sources indicate the model used for both shots was that of the self-destructed Enterprise made for Star Trek III: The Search for Spock. 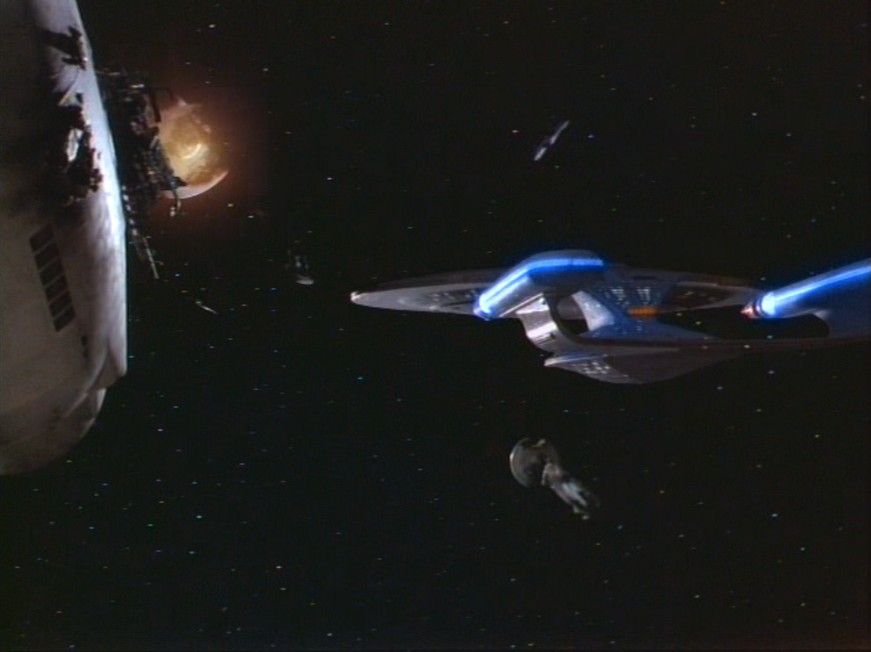 There was an exchange in TNG : The Battle where we see that the USS Stargazer was originally intended to be a Constitution-class vessel. Due to budgetary reasons, it was then redesignated (for the show) as a Constellation-Class vessel.

Turbolift opens TO BRING Picard onto the bridge, unnoticed by most as Tasha silences the ALERT and Wesley turns to Riker.

Outside of the TV show, you can clearly see a second Constitution-class vessel fighting alongside the first one on the cover of the Doctor Who/Trek crossover "Assimilation²". 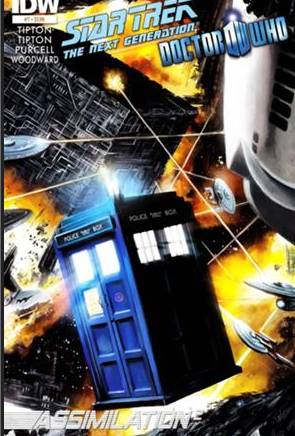 There is also a suggestion that the USS Republic (seen in TOS: Court Martial) is still in service as a training vessel in the TNG era. Although not seen in-canon, it's referenced in the video game "Star Trek: 25th Anniversary" as well as "Klingon Academy" and "Star Fleet Battles".

There are canonically (as far as my research leads me to believe) NO Constitution-class starships in service in the TNG era.

All of the surviving original Constitution-class ships were refitted around 2270 in order to prolong their lives until the 2290s as the following quote indicates:

Major changes were made to the interior of the Constitution-class starships; many new systems were added and existing ones upgraded. Summarizing, only the internal structure of the saucer and very little of the engineering hull and neck may have survived the 2270s refit. (Star Trek: The Motion Picture)

Some refit configurations had the warp nacelles rotated 90 degrees and included additional hatches along both sides of the saucer. (TNG: "Booby Trap")

Other TOS-movie era starship types that have survived until TNG were all designed specifically in the 2260s and 70s using the Constitution refit technology which is obviously more robust and future-proof than the original Constitution designs. Miranda-class, Obert-class and Excelsior-class have all thrived through to the TNG era because they could cope with the upgrades and modifications needed through the 70 or so years of service and proved to be versatile designs. It could be postulated that the first dedicated, long-service starships, the Constitution-class, were the prototypes for human deep-space exploration and were not designed to be futureproof. 2260s and 70s designs may have been designed specifically for longevity and for ease of upgrade.

That all said, there is ONE example of a Constitution-class ship that was in service up to the battle of Wolf 359, because the wreckage of one is visible in the scene where the Enterprise D arrives at the battle site: 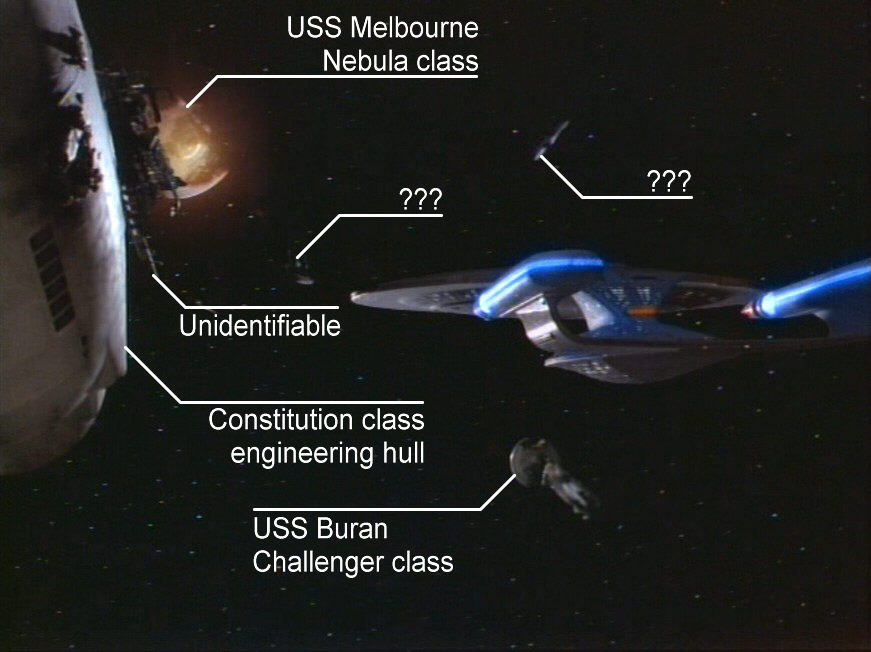 The saucer of one is apparently visible too, just before the ad break following the same scene: 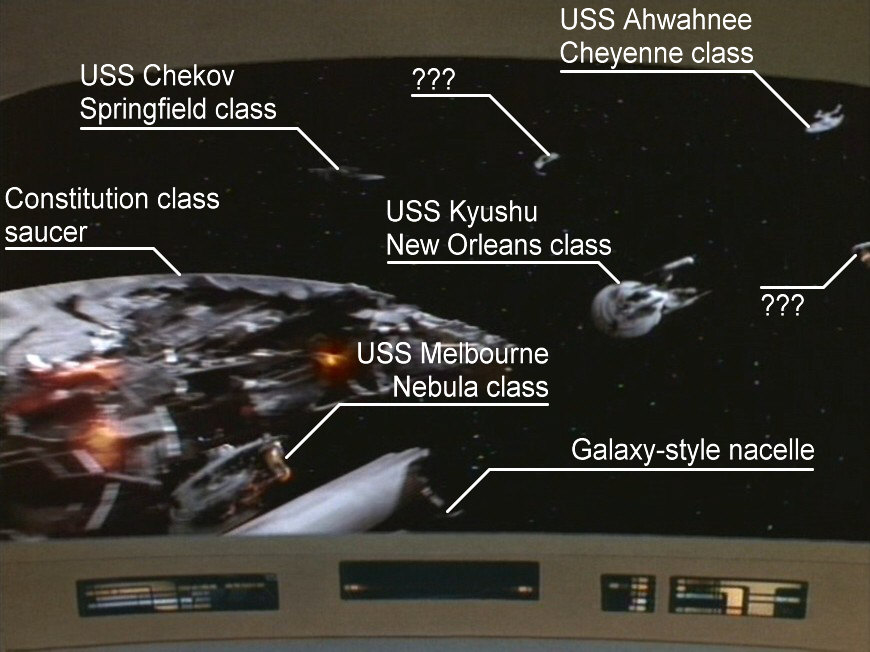 The Ex Astris Scientia website identifies the model used for this scene as the destroyed Enterprise model from Star Trek III, and this has been inferred from information provided by the production staff but never confirmed as canon.

So the final answer I would give is that there was a total of one Constitution class ship in service until 2366, where it was destroyed at Wolf 359. I myself prefer to take the opinion that there were none, and that the existence of Constitution parts in the Wolf 359 debris was simply a production decision that has never been made canon - the Ex Astris Scientia page I linked to above contains a lot of text that indicates the production staff wanted to deny the existence of the Constitution class stuff in the wreckage.

There aren't any listed in any of the typical sources as still existing in that time frame. That being said, in the TNG episode Best of Both Worlds pt. 2, among the wreckage the Enterprise D finds in the aftermath of the Battle at Wolf 359, there are several screen captures that show debris that appears to come from a Constitution class vessel. It appears likely that models from the movies were re-used to add to the debris field. 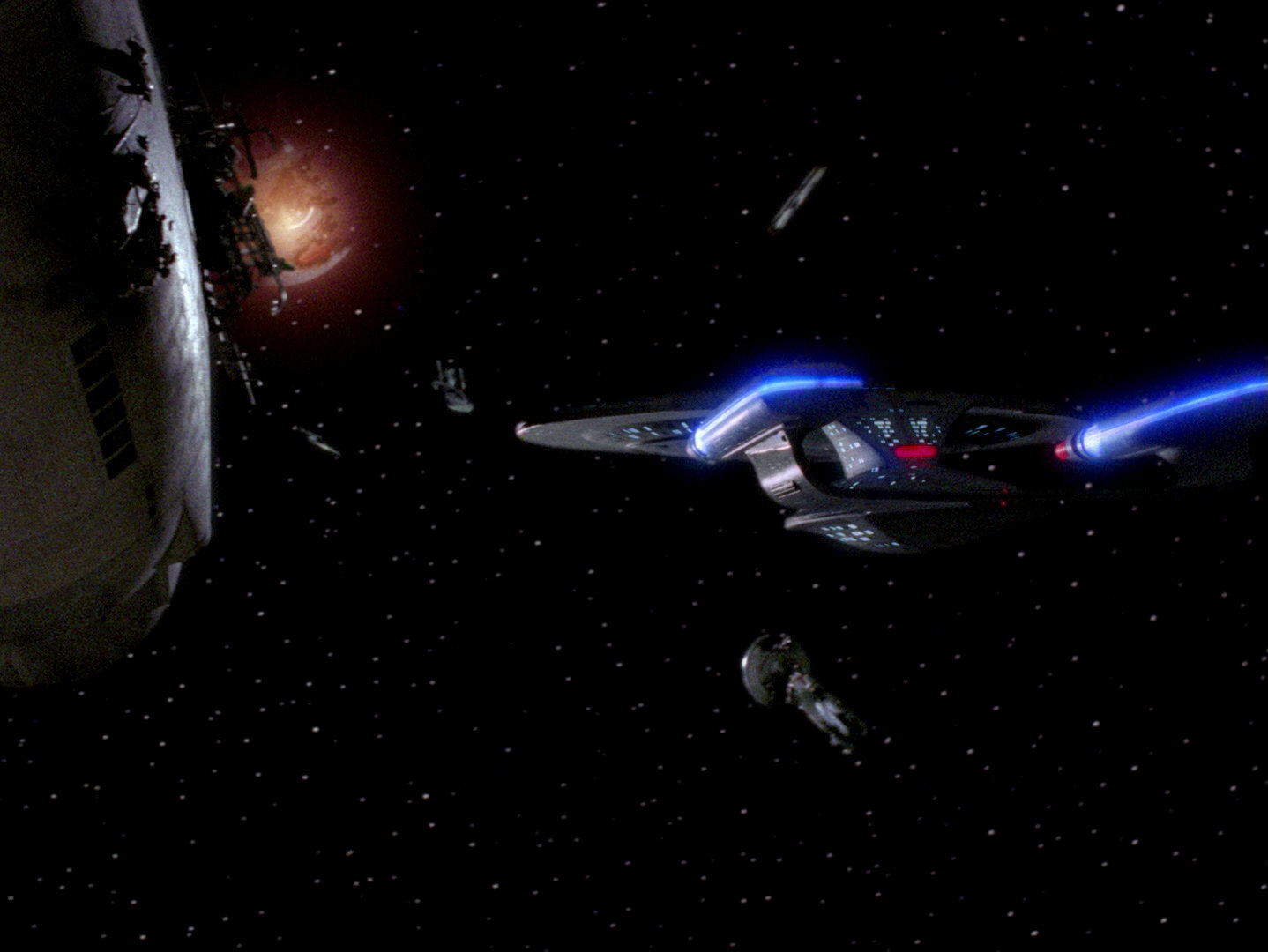 I've never quite known if books count as canon or not, but I'm currently reading Star Trek TNG:The children of Hamlin, in which the USS Ferrell which has two of the main book characters on board, and is destroyed, is described as a Constitution Class ship. Like I say, I'm not sure how canon this is, though.

No, because the writers of Star Trek said that the limbs were too vulnerable, like where the neck of the ship and the arms holding the nacelles. That's why the Excelsior class was made with a more compact design. The two other classes were being slowly pushed out of service and they weren't interested for battle; their design was also not as open either. So that's why.

Not the answer you're looking for? Browse other questions tagged star-trek star-trek-tng spaceship or ask your own question.

29
Were there REALLY over 73,000 Federation starships commissioned?
14
Did the Federation actually have consistent naming conventions for their ships of the line?
21
Why was the USS Enterprise NCC-1701-A in service for so short a period?
15
Why are Star Trek ships (mostly) built by hand?
6
Why weren't the Sovereign-class vessels used in Dominion War battles?
4
Why didn't the Sovereign Class have folding warp nacelles?
4
What is the naming convention for capital ship classes?
32
Did Starfleet ever have an Enterprise-class of starship?
10
Which starships can undo a separation without outside assistance?
13
Do starfleet ships still have prefix numbers?