Are Black Widow and Hawkeye an "item"?

I believe it is hinted at in the first Avengers movie that Hawkeye and Black Widow are going to have (or currently have) a thing but in the new Captain America movie, Black Widow and Captain America are hanging out together and things seem to be getting a bit steamy between them.

I was curious if anyone would like to clear this up, I always thought Captain America's love interest was Sharon Carter, the niece of Peggy Carter (who he'd known before his accident and subsequent freezing).

Avengers: Age of Ultron reveals that

Hawkeye already has a wife and kids. 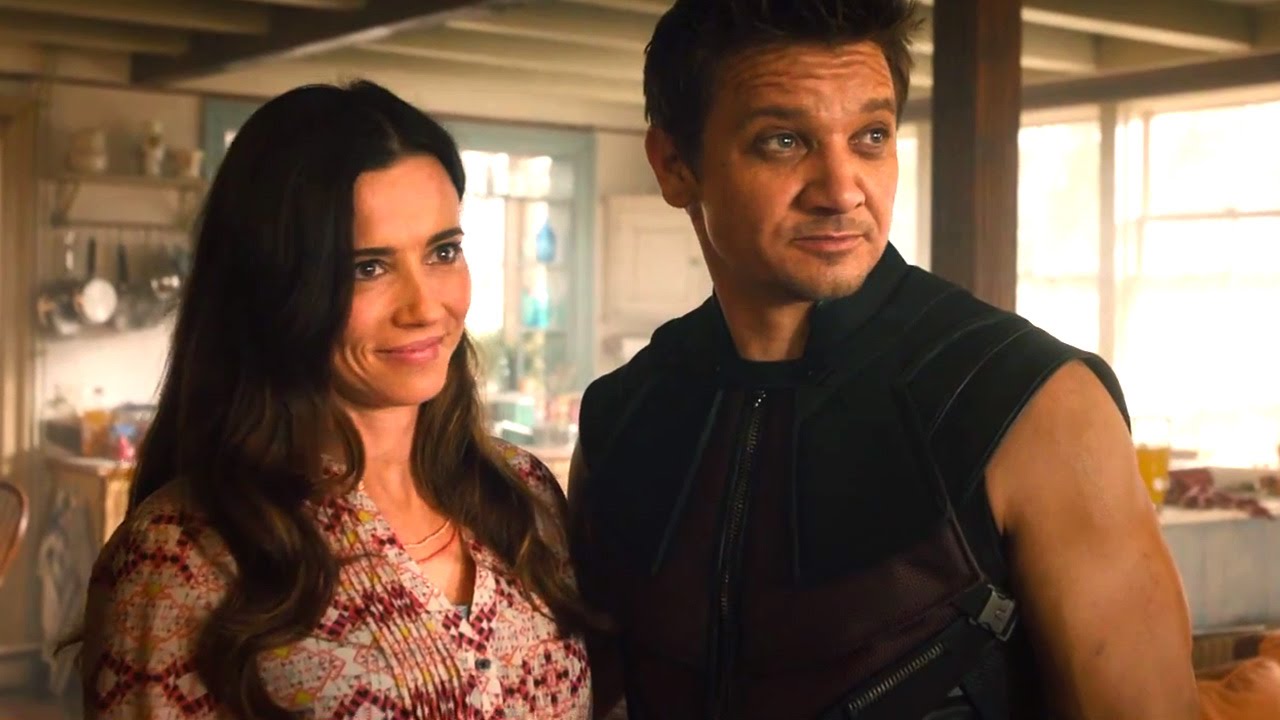 He and Black Widow are apparently just good friends.

On the run, the naive Hawkeye met the Black Widow, a spy for the Soviet Union, with whom he fell in love. Blindly following the Black Widow, Hawkeye aided her attempts to steal technology developed by Tony Stark.

Later, Black Widow goes on to have relationships with several other male superheroes, notably Tony Stark, but her and Hawkeye have a continuing 'thing' between them. Hawkeye also pursues other relationships, most notably with Mockingbird, whom he marries.

As far as the movies go, it is somewhat obvious that they have a connection, but it has been kept deliberately vague. This is possibly because Marvel is saving their relationship for a future Avengers or stand-alone film, or possibly because they have decided on a different direction.

While Captain America does have more than one love interest in the comics, Sharon Carter is always the main one, and I do not know of Black Widow and Captain America ever pursuing a relationship at any point.

In the comics, they do certainly have a thing. Here is an excerpt from Avengers Assemble: An Oral History of Earth's Mightiest Heroes by Brian Michael Bendis (Marvel, 2012), which draws directly from the canon of the original comics, and not the movies:

Janet Van Dyne: I thing Clint Barton is still in love with the Black Widow. I think she's the great true love of his life. And I take nothing away of his ex-wife Bobbi. He loves her too. Without a doubt.

where Janet Van Dyne is the original Wasp, and a founding member of the (comics original) Avengers.

And to make things worse, shortly after the first big change in the Avengers team synthesis, with Hawkeye, Quicksilver, and Scarlet Witch as the new members:

Clint Barton: And to make matters worse, I had a gigantic crush on Wanda Maximoff, the Scarlet Witch, just gigantic... and she was head over heels in love with Captain America. I don't know if he knew or couldn't tell or just wanted to keep it professional. I don't know. But I was staring at her, she was staring at him, her brother, Pietro, was staring at all of us, and if you add the Enchantress and Power Man and Doctor Doom or whatever the hell else was going on...

Steve Rogers: Love is a very strong word. Nodoby was in love with anybody. Hawkeye likes to exaggerate.

Not the answer you're looking for? Browse other questions tagged marvel marvel-cinematic-universe avengers captain-america captain-america-the-winter-soldier or ask your own question.

4
Why wasn't there a Black Widow and Hawkeye movie?
22
Is Black Widow genetically engineered or enhanced in Avengers?
28
Are S.H.I.E.L.D. agents (e.g. Clint Barton, Natasha Romanoff) ever referred to by their comics aliases?
21
Why are some S.H.I.E.L.D. agents referred to by codenames or numbers?
10
Is the film line up of The Avengers taken from the comics?
4
In The Avengers (2012), How did they communicate at the climax without any ear device even though the inner ear technology was created in 2013?
5
As Goliath, did Clint Barton ever take advantage of his Hawkeye skills?
15
Why were Captain America and Black Widow in such a hurry to close the portal?
36
Did Captain America make out with his niece?