I am looking for a SF book based in the far future.

The weapon life form is created by humans, half mechanical and half biological I think. They can travel through space.

And member of the group was a human.

It was a thick book, like 300 pages or so, and if I remember right, a black front with a small image.

What is important maybe, is the fact that almost everything in the universe is discovered already, and a universal governement is having control. The planet where the lifeform is fleeing to, is living and is full of nature, trees and plants. No animals or aliens there. The planet is located at the borders of the known universe.At the end of the book the different spieces learn the power to transform in a collective lifeform where they become "one"

Earth is still there but people that live there, live underground because the air is not good enough to breath. Above the ground, earth is full of growcentra for stuff I can´t remember...

story-identification books aliens
Share
Improve this question
edited May 29 '14 at 16:02

There are parts of this that would seem to match the Beholder's Eye of Web Shifter's trilogy by Julie Czerneda... though I'll also admit right now that other parts of it are quite far off.

Yes, all planets with life are part of a universal government / union. It is called the Commonwealth.

Yes, a weapon-life-form has killed people in a distant base.

Yes, the weapon-life-form does flee to a distant planet.

Yes, there is a group of aliens that are hunting this. Though they're from the same species... they can shape change.

No, the life form is not half biological / half mechanical. It is more energy / biological. Yes, it can travel through space.

Not really, while a member of the group takes on a human form... though as mentioned, it is shape shifted.

Yes, a prominent destination is a planet full of vegetation.

No, They're isn't a 'learn to become "one"' or another species learning to shape change.

No, Earth is not part of the story.

The amazon.com summary blurb of the book:

Esen-Alit-Quar is the youngest of her Web, a "family" of extremely long-lived shapeshifters. Web-beings live in the diverse cultures and forms of intelligent life to learn and preserve their accomplishments. On her first assignment Es rescues a human, Paul Ragem, from the culture she's studying. But he and some on his first contact ship learn about her shapechanging. This could be fatal for Esen's Web, as an Enemy has appeared, seeking to destroy them and consuming all intelligence in its path. Es must elude pursuit by humans, who believe she is the Enemy, warn her Web members, and defeat this danger. Paul Ragem offers help, but asks Es to trust him with knowledge of her kind. He could lose his friends, his career, and his life, or he could betray Es to his human colleagues out of fear.

The book is The Mind Pool by Charles Sheffield. It is, in fact, based on a previous book called the Nimrod Hunt, mentioned by Klaatu.

In the 23rd Century, out of all the races of the galaxy, only humanity has discovered the secret of travel between the stars - not so much because we're smart, but because we are incredibly gadget-orientated. We are also, compared to the galaxy's highest sophisticated norms, very, very tough, which most of the time does nothing for our social acceptability. But when a threat to all life in the galaxy arises from non-living biological constructs, suddenly the peculiar human virtues of valor and stubbornness make us the sword-wielding saviours of All...

The cover you are thinking of might be this one: 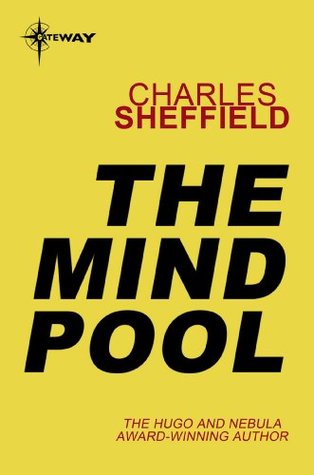 Baen has the first nine chapters of the book available for free.

Could it be The Nimrod Hunt?

The summary according to Wikipedia:

Nimrod Hunt is a science fiction novel by Charles Sheffield. The story takes place hundreds of years in the future, with humanity having extensively colonized surrounding space, including beyond the solar system. Humans have encountered three extraterrestrial races, which although all bizarrely different in physiology and psychology coexist peacefully. In order to defend from unknown threats beyond known space, a security company creates highly advanced robotic soldiers to patrol the border. Unfortunately these go haywire and become the single greatest threat. A series of four-member teams, with a representative from each species, is dispatched to deal with the problem. The action of the story follows one such team.

It might be "Berserker" by Fred Saberhagen. There's a free copy here: http://www.e-reading.ws/bookreader.php/1010292/Saberhagen_-_Berserker.html

11
Short story where aliens threaten to kill humans because we do not share a group mind
7
Book involving Alien Invasion, enslavement of human race
9
Alien Yeti-like Protagonist, 3 stages of life + book split into them, last of his species, Pre-2000s Book
7
Science Fiction Series about human scientists forced to live on high gravity planet by stronger aliens
8
Book about a girl who learns she is half Elf, half Human
9
Aliens destroy Earth. Book follows humanity's rebirth after attack