What was the cause of change of design of the Sovereign-Class deflector?

As you can see in the two images below, there was quite a difference in the deflector dish design of the Enterprise-D and Enterprise-E. The Sovereign Class Enterprise-E seems to be more of a physical dish that protrudes (a little like the Constitution's) whereas the Galaxy Class Enterprise-D's deflector is just a dish with rims on it. There is also a considerable colour change.

What is the in-universe reason for this change, apart from ejecting it in case the Borg decide to use it to send a message when they travel back in time (because the starship designers obviously knew that was going to happen!) 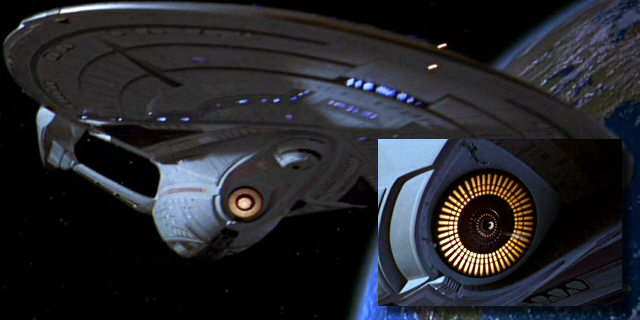 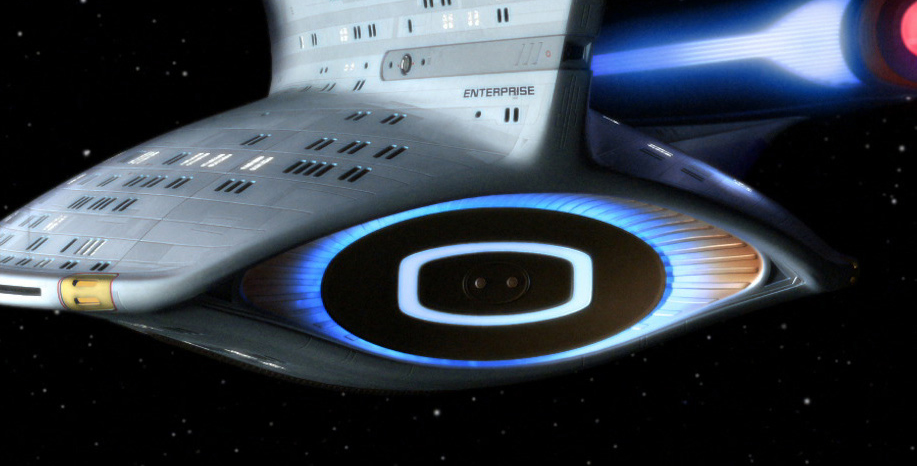 What is the in-universe reason for this change, apart from ejecting it in case the Borg decide to use it to send a message when they travel back in time (because the starship designers obviously knew that was going to happen!)

The deflector, as with many pieces of Federation ships, are designed with 'plug and play' functionality. This is alluded to in a lot of off-screen documentation, such as the TNG Technical Manual -- but it is evidenced on-screen quite clearly in movies such as the run of TOS movies. The bridge of the Enterprise (and later Enterprise-A) is rarely identical in any series of movies. Consider the look of the bridge in Star Trek IV:

And take a look at it in Star Trek VI: 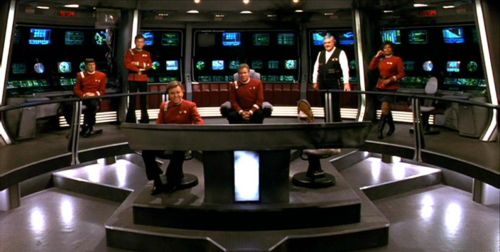 Now, arguably and with an absence of explicit on-screen data to suggest such -- it could just be a refurb. But we're led to believe that a lot of these aspects of design are designed to be easily swapped in and out, hence the 'detachability' of the deflector array is not entirely outside the realm of possibility.

In fact I would encourage you to examine the shot of the Enterprise-D's deflector dish -- it isn't a solid piece, it has the main concentric oblong shaped area with the orange-and-blue pattern, which sits in that ridged 'bowl'. Potentially, the middle concentric piece is as 'swappable' as the Enterprise-E's dish.

As for its 'purpose' or the design reasons that led to the pronounced change -- who the hell knows? There's not really a great on-screen explanation as to why some ships have a star drive section (aka, 'not the saucer' section) and why others don't, or why some ships don't have a long neck, or why others have more than two nacelles, or why the Daedalus-class ships are granted a giant medicine ball instead of a saucer, or or or... it just serves to show us that different ships are built for different things.

Except for Excelsior-class ships, which were apparently built for everything.

(Conjecture -- I would also hazard a guess that its artistic motivation came from a similar place as the jump from 1701's 'satellite dish' to the refit's 'blue glowy bit' change - it is a marked diversion from the previous design, which places the Enterprise-E's visual presence squarely in new territory, away from the syndicated series. It is, at the end of the day, a Very Different Ship.)

The Sovereign class is stronger, faster and more durable than either the Constitution or Galaxy class. Upgrades to support these characteristics are quite visible including the deflector array. This upgrade would also allow for much easier maintenance access or to R&R (Remove and Replace) any damaged or worn components. The warp nacelle pylons and the saucer neck have also been reworked to enhance structural integrity and longevity.

11
Why did the Kelvin look like a reboot starship
16
What genuine references are there in Voltaire’s “U.S.S. Make Shit Up” song?
11
What was the “next class starship”?
6
Why weren't the Sovereign-class vessels used in Dominion War battles?
4
Why didn't the Sovereign Class have folding warp nacelles?
11
What is the end state of a starship that has been assimilated by the Borg?
7
How can the dilithium chamber on a Sovereign class vessel be accessed?
5
Where is the deflector array on the Phoenix?