I have the cover art for a book, probably a children's book, but no idea what the title of the book is. 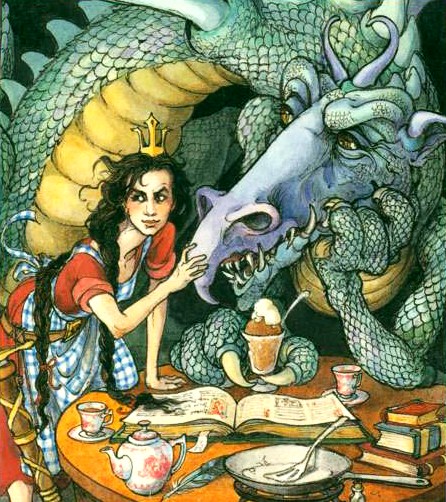 If someone could help me identify this book, or even offer details that they might remember about it, I'd be very appreciative.

About the fifth result down is an Amazon link for a book called Dealing with Dragons, by Patricia Wrede. This is the description from the Amazon page:

Cimorene, princess of Linderwall, is a classic tomboy heroine with classic tomboy strengths--all of which are perceived by those around her as defects: "As for the girl's disposition--well, when people were being polite, they said she was strong-minded. When they were angry or annoyed with her, they said she was as stubborn as a pig." Cimorene, tired of etiquette and embroidery, runs away from home and finds herself in a nest of dragons. Now, in Cimorene's world--a world cleverly built by author Patricia C. Wrede on the shifting sands of myriad fairy tales--princesses are forever being captured by dragons. The difference here is that Cimorene goes willingly. She would rather keep house for the dragon Kazul than be bored in her parents' castle. With her quick wit and her stubborn courage, Cimorene saves the mostly kind dragons from a wicked plot hatched by the local wizards, and worms her way into the hearts of young girls everywhere.

Does that sound familiar?

From a quick Google Image Search it appears to be from Dealing with Dragons by Patricia C Wrede:

Quick Summary/Review of the story:

Princess Cimorene hates deportment and advanced curtseying, but she's denied lessons in magic, swordsmanship, or cooking--so she runs away and applies for a job as Dragon's princess. She keeps cave, treasure, and kitchen in order, but has trouble convincing the rather dim Prince Therandil that she really doesn't want to be rescued. It's fortunate that she succeeds, since a renegade Dragon has betrayed his kind to the Wizards, and only Cimorene can save her Dragon, Kazul, from being destroyed, in the end, Kazul becomes King of the Dragons, while Cimorene becomes King's Cook and Librarian. Along the way, she learns to fireproof herself, consort with witches, read magic tomes, outwit djinns, and instill pluck in a fellow princess. Smoothly written and ingenious fantasy. Both Cimorene and her dragon are firmly drawn, tough-minded females who refuse to conform to stereotypes (being female doesn't prevent a dragon from becoming king). The touch of feminist persuasion only adds to the story's charm. 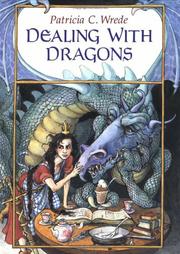 It also appears to be a series of five books.

10
What was that Sci-fi book mixing classic art and book excerpts to build a timeline of the universe?
3
Darker short-story anthology featuring Whelan-like art, beach campfire on cover?
12
Please help identify this children's story about a family robot that runs away to avoid being destroyed
3
YA book 90s-early 00s a young girl attends a magic school, cover art brown haired girl and bubbles?
6
Children's book about a girl living on the moon and visiting a family on earth
9
Children's book from the 90s early 00s about kids discovering a parallel town. Green book cover
8
YA book about brother and sister in virtual reality
6
Book identification: children's book about family of vampires
24
A fantasy book with seven white haired women on the cover