Who was in the X-Men: Days of Future Past post-credits scene?

At the end of the film X-Men: Days of Future Past, there's a short scene after the credits. In it,

a crowd of people in the desert are worshipping a cloaked figure on a hilltop. They chanted, "En Saba Nur," as they bowed to the person. Behind them, a gigantic Egyptian pyramid comes together, stones floating into large wedges, which then float into place in the pyramid.

Who was this character, and why were they featured in the post-credits scene?

En Sabah Nur is the real/birth name of the mutant known as Apocalypse. 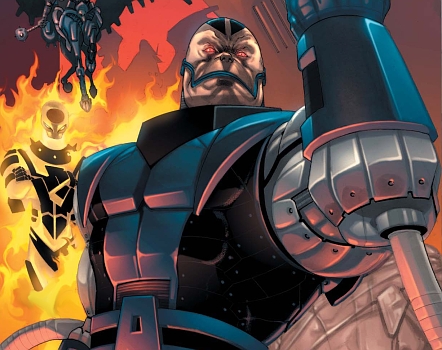 He is one of the X-Men's most formidable foes, being able to reconstruct himself at the molecular level, and employing henchmen (the most famous being Mr Sinister, and The Four Horsemen, which has included members of the X-Men at points in time) to do much of his dirty work. In addition to his natural powers, he also commands many alien technologies, augmenting his own powers and enabling him to do many things, including heal himself and to time travel.

Four horsemen make a brief appearance in the scene (though, they are not necessarily The Four Horsemen)

He is said to have been the first (oldest chronologically) mutant in the Marvel universe, having been born in the Middle-East 5000 years ago. He has appeared throughout history, manipulating people and current events to incite war and unrest - all in his goal of furthering "survival of the fittest". He is regarded as a god to some civilizations/cultures.

The post-credits scene is a direct lead-in to X-Men: Apocalypse, which was announced earlier this year. (note that Singer arguably went back on his word about Apocalypse not showing up in the stinger, though one could argue that he's not Apocalypse at that point)

Simon Kingberg, the writer/producer, confirms that it is En Sabah Nur/Apocalypse:

“The post-credit sequence is a tease into what will be the Apocalypse movie” he explained. “Now the Apocalypse you see – that young boy – may not be the actor who plays the character in our movie. It’s a deep back story glimpse into the character, but our movie doesn’t take place in ancient Egypt and will likely not star a young boy Apocalypse.”

4
What is Apocalypse's real name?