I'm absolutely fine with the idea, that a certain angle/position of the nacelles is better than others. And hence it's good (for whatever reason - be it energy efficiency or more speed...) to have them in that position. So my question is less: "Why do the nacelles rise when they go to warp?". The answer is simple: "Because in trek-physics it's better to have them there when going to warp." My question is more: "Why are they lowered when dropping to impulse?"

The nacelles are not involve in the propulsion of the ship when on impulse. Why are they not forged in the favourable position for warp? For some reason it must be better to lower the nacelles when you fly on impulse.

Maybe they are less exposed in combat-situations? Are they easier to access for reparations if they are lowered? Can the Bussard-collectors work more efficiently if they don't have the saucer-section blocking their ways?

Why can the warp-nacelles be lowered? Why are they not fixed in the position which is best for flying on warp?

The Voyager entry on StarTrek.com speaks to the reason for the movable ("variable geometery") warp nacelles. After the events of TNG "Force of Nature" it was proven that high speed warp damages the structure of subspace.

The new 'folding wing' seems to negate this by moving when initiating high warp (or creating a substantial warp field). Notably, when low warp is initiated this same movement doesn't always seem to take place

Voyager's folding wing-and-nacelle warp drive system allows the starship to exceed the warp 5 "speed limit" without polluting the space continuum. Voyager can reach a speed of warp 9.975, but only for short periods. 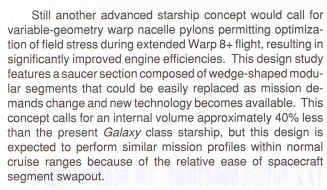 Out of universe, you can see from this early design sketch that the warp nacelles were intended to have much more dramatic movable portions (referred to as "Warp Field Enhancers") that would flare out from the main ship. This was ultimately scaled back due to studio concerns over lighting and budgets.

Not the answer you're looking for? Browse other questions tagged star-trek star-trek-voyager propulsion or ask your own question.