How does Mystique change height?

If mass and matter cannot be created nor destroyed, then how does Mystique get taller or shorter, for example when she

imitates Trask in X-Men: Days of Future Past

Do her atoms and organs simply rearrange themselves? Does she become more dense?

In the X-Men Cinematic Timeline, we have been given no canon to explain her morphogenic abilities. Given that the Hulk acquires 600+ pounds during his transformation, there is no reason Mystique couldn't do the same.

In the canon Earth-616 Timeline

In the previous Scifi-Stack Exchange Question: Can Mystique CREATE Objects? The canon character received an update to her powers and abilities in the classic Marvel style.

In 2001's X-Men Forever miniseries, Mystique is exposed to dangerous levels of radiation in order to save the life of Toad. The process morphs Mystique's appearance to match her more reptilian physique from the 2000s film trilogy, and boosts her powers so that she can now morph her body into taking certain desired physical traits depending on her situation at the time.

With her revised powers (a classic Marvel "Radiation Accident") her transformations now include powers such as night vision, wings on her back, talons in her fingers, and natural body armor. These powers make more sense since she would be getting them by imitating things already seen in nature. A cat-like eye would have better night vision, for example. 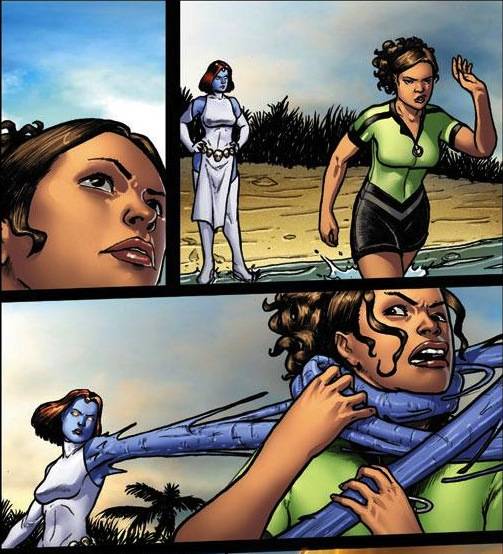 In the X-Men movies universe

According to the Official Handbook of the Marvel Universe: (corrections)

Her weight is listed as 120 lbs. (variable). However, Mystique cannot change her weight when she shapeshifts, she merely rearranges it. As such, her weight is no more variable than any person; she gains and loses it through eating, dieting and exercising. Thus, her weight is not variable.

The fully canon explanation would be that if she appears to be more massy (as she grows in stature), it's likely to be a matter of appearance. She may be holding onto the ground or stamping to give the impression of greater weight.

Similarly, her organs have proven to be very flexible. In the latest reboot (post X-Men forever) she is able to flatten herself, Mr Fantastic-style as well as generating machine objects and animal forms. This means that it's quite likely that as she grows or shrinks, she simply rearranges her organs to suit her outward form and she may be able to alter her molecular structure.

3
Can Mystique become the Hulk if she shapeshifts into Bruce Banner?
3
Is Mystique just a better Colossus?
2
Can Mystique shapeshift to someone who is considerably larger than herself?
43
What happens to parts of Mystique that are cut off?
24
Can Mystique create objects?
10
Can Mystique replicate a person by just looking at a photograph?
2
Biological functions of Mystique when morphed

21
Does Mystique need to actively maintain her transformation?
24
Can Mystique create objects?
5
When was Mystique declared mother to Nightcrawler?
1
Mystique replicating a target's attire, how does it work?
4
Where did Mystique learn her combat skills?
5
How can Mystique mimic a fingerprint?
6
Mystique and transformed physical abilities