In what episode does Anakin get his padawan (Ahsoka) in Star Wars : The Clone Wars?

I'm trying to watch the Cartoon Network's CGI Star Wars: The Clone Wars from the very beginning, but the version that Netflix has, is when Anakin and Ahsoka already are master/pupil.

Where or how can I google to watch the show from the very beginning? As in, since when Anakin gets Ahsoka. I watched the show live when it aired and I've been able to find clips, but no full video or anything.

The Clone Wars movie, not an episode per se.

With the help of Obi-Wan Kenobi and Anakin Skywalker, the clones steadily advance on the Separatists' forces, gaining the Republic an early victory. It doesn't last long, though, as the droid army soon returns. With no communications or the ability to fly in reinforcements, the fate of the few remaining clone soldiers are in the hands of Obi-Wan and Anakin.

A shuttle arrives, but without the needed reinforcements. Instead, it is a young Padawan named Ahsoka Tano, who insists that she has been sent by Master Yoda to serve under Anakin. The battle soon commences yet again, with the Separatist forces advancing behind an expanding energy shield that artillery can't penetrate. Anakin and Ahsoka succeed in penetrating the enemy lines while Obi-Wan stalls for time by holding a fake surrender negotiation with the droid army commander. 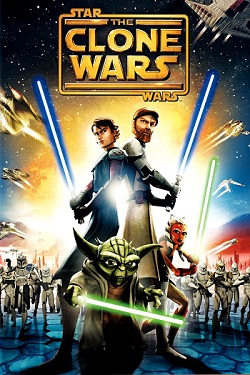 Sadly this is not an episode on Netflix. There is no episode where Ahsoka is appointed to Anakin Skywalker by Yoda. However, I do know what scenes you are talking about. There is a Star Wars: The Clone Wars movie. That is where you will find the "before" Star Wars the Clone Wars T.V. series. The movie has Ahsoka meeting Anakin, Captain Rex, and the first appearance of the Separatist forces. They also return Jabba the Hutt's son in this movie.

17
When did Anakin stop being a Padawan?
14
Why did the council assign Ahsoka as apprentice to Anakin?
4
Clone Wars The Framing of Ahsoka Tano
5
Padawan rank in the Clone Wars
5
How does Ahsoka know about Anakin wanting to leave the order?
1
Star Wars the clone wars episode where Anakin & Ashoka meet?
15
Why are Ahsoka Tano's headtails short in The Mandalorian?
5
When did Vader find Ahsoka's lightsaber?