Where is Gotham City located?

Ask Question
Asked 10 years, 4 months ago
Active 3 years, 2 months ago
Viewed 141k times
51
Want to improve this post? Provide detailed answers to this question, including citations and an explanation of why your answer is correct. Answers without enough detail may be edited or deleted.

Has there ever been a definitive location cited for Gotham City in the DC Universe United States? I remember hearing somewhere that it is close to New York (the DCU has a New York), but how close?

From the Batman Wiki

Because it is a work of fiction, it can be wherever it is convenient for the writers.

Maps shown in various comics have depicted the city in different places. Many of the maps directly use Manhattan, Vancouver, and other real coastlines as their basis, while others are completely original. One map showing Gotham City in relation to Metropolis, the home of Superman, published in New Adventures of Superboy #22 (October 1981), placed Gotham City and Metropolis on opposite sides of a large bay. In Swamp Thing vol. 2, #53 (October 1986) the geography of Rhode Island was the basis of another map of Gotham City. The current definitive maps of Gotham City are those based on the ones produced for the "No Man's Land" story arc.

Lots of references place Gotham City as being in New Jersey.This map gives the Gotham City and Metropolis positions from across a bay. Ref: Karridian.net

This is somewhat consistent with this quote:

Gruenwald suggested that Gotham City is located somewhere in the state of New Jersey while Metropolis is located in close vicinity to Washington, D.C.

There are several other comics which place Gotham City in New Jersey, with references to proxity to the Jersey Shore and Hudson County. Based on the "No Man's Land" I believe it is now generally accepted that the city is located south of New York City in the state of New Jersey, situated on the coast.

In the film, Gotham and Metropolis are separated by Gotham Harbor (similar to the No Man's Land map, and the New Adventures of Superboy #22 comic). Although it is not specifically stated which state either reside in.

In Batman Secret Files #1, released on 31 October 2018, a precise set of coordinates are given for a location within Gotham City: 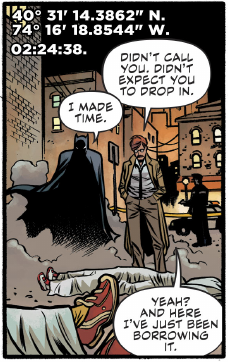 In the real world, these coordinates fall within Perth Amboy, New Jersey, across the Arthur Kill from the New York City borough of Staten Island.

We know that Gotham is in New England(presence of 1600s-era English settlers most recently seen in "Return of Bruce Wayne), and it is on the coast(seen all the time). Other than that, it's location is deliberately ambiguous.

There was a DC Roleplaying game that published a map. Check it out over on iFanboy.

I think Gotham is somewhere near Liverpool, NY because in the set of issues Batman:The Return of Bruce Wayne, he is sent back in time by Darkseid and in one of them, one of his ancestors talks about Gotham near Liverpool. Look up Liverpool, NY on google maps and you'll see it's next to a body of water where in the end of The Dark Knight Rises he brings the bomb and drops it in the bay. Although, I may be wrong because in the movie, Bane blew up bridges on all sides of Gotham meaning it was an island.

In southern New Jersey, in Gotham County, based geographically on the Bristol Township.

Source: (scroll down to geography)

11
Are Gotham and Metropolis neighbours?
22
Do the cities in the DC Universe correspond to real world cities?
6
Could Batman be arrested for driving an unregistered car without a license?

22
Do the cities in the DC Universe correspond to real world cities?
25
Are there economic implications portrayed in comics where the buildings and cities are ruined almost daily?
12
Why was Gotham City changed from a mostly fictional city to New York City in the Nolan trilogy?
13
Where is Starling City located?
4
Which city in the DC Universe has the highest crime rate?
12
What makes Gotham work as a major city?
3
What is Gotham City a metaphor for?
26
Why doesn't Gotham City execute their villains?
5
Information/Device For Gaining Superpowers In Gotham City Public Library