I seem to remember several dating systems mainly in the Star Wars Expanded Universe. Furthermore, I was wondering if periods of time such as seconds, days, or months represent the same amount of time as they do in the real world.

So these are the main points of this question:

Sorry if it seems I have asked too much in one question - splitting this question up into multiple questions did not appear to be a good idea as much of its content is very related.

Thanks for your time!

In the new Disney canon, there are many dating systems, only two of which have been described:

In an episode of Rebels Recon, a behind-the-scenes show for Star Wars Rebels, Pablo Hidalgo revealed that planets synchronize their timekeeping with Coruscant:

Andi Gutierrez: Nolan Jiminez asks: "How is time measured in the galaxy if each planet has a different time of rotation and translation?

Hidalgo: We kind of assume that there is a standard hour, a standard day, a standard month; a unit of measurement that everyone understands how long that is; and, in our storytelling, we say that all that measurement comes from Coruscant. So, not only is it the galactic capital, it's sort of the yardstick through which all time is measured in the galaxy.

Per the canon reference book Star Wars: Absolutely Everything You Need To Know, a standard day is 24 standard hours, and a standard year is 365 standard days: 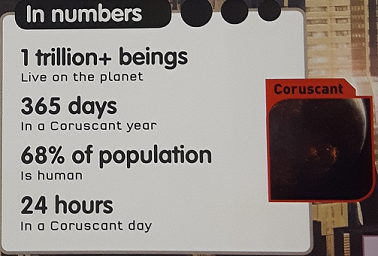 It's unknown how, or if, this would have changed after the collapse of the Empire, when Coruscant ceased to be the capital of the galaxy; it seems unlikely that something like this would change, but you never know.

0
How long is a year in Star Wars?
3
How is time measured in the galaxy far far away?
165
Which ship can go faster, the Millennium Falcon or the USS Enterprise-D?
21
How is the time of day referenced in Star Wars?
13
Which planet contains the seat of the new Republic government?
0
What are the pilots in A New Hope talking about?

80
Star Wars Imperial Ships: Oversized?
2
Star Wars: Possible reference to our Solar System?
11
How do communications work in Star Wars?
12
Origin of droid names in Star Wars
5
Does the Star Wars universe have immigration laws?
10
How does education work in the Star Wars galaxy?
3
Who is the earliest named character to live in Disney Star Wars canon?
8
Did Anakin and Ahsoka train at the same time?