Movie in which person turns into monster by mask with tubes

Some time ago I watched a movie, of which one scene never left my mind.
In that scene there was a room full of shelves and tubes and jars (some kind of laboratorium), with a man in it.

Someone else enters the room and forces him to lie down. Then he (the person who just entered) puts a mask on the first man's face with a lot of tubes attached to it.
All kinds of fluids then enter the man's body and he starts twitching uncontrollably.
However, he isn't killed by it (which also wasn't the purpose), but he turns into a monster, ripping everything off him and smashing everything in the room to smithereens.

I think the movie was released in the late 20th or early 21th century.

Does anyone know which movie this could be?

Bane was strapped down, is injected with "super soldier serum", twitches, and breaks free, destroying things.

Could it have been Batman and Robin? I'd consider it unlikely, simply due to them being so popular and their presence in the movie unlikely to be forgotten, but the scene you described sounds really reminiscent to Bane's transformation in that movie:

Could it be Riese from SyFy?

The series is about a traveller named Riese, who flees across the wartorn lands of Eleysia with her wolf, Fenrir. Hunted by a terrifying religious group, The Sect, Riese must evade the assassins that have been sent to kill her and discover their true objective.

Herrick, a major antagonist, is always seen in a mask: 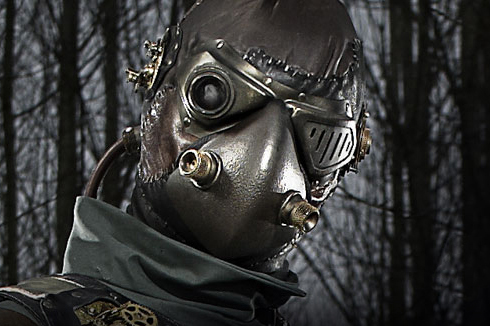 Masked and nearly inhuman, Herrick is a Senior Magister in The Sect. His charge is to seek out and punish heretics. Only a select few know his former identity or his reasons for joining the Sect. Even fewer have seen his true face, which is covered by a horrifying mask worn by the purest of magisters. His rank amongst the Sect is high, which is evident by the relics he has affixed to his body. Herrick has been ordered by Empress Amara to hunt Riese. He deigns to follow Amara's orders, appearing to work in congress with her, though there are signs he has motives of his own. Vicious and without conscience, he will stop at nothing to ensure his objective is complete.

13
A TV Movie where a guy turns into a cyborg?
11
Movie with "Where do the tubes go?"
4
80's movie about a man who finds a robotic arm which eventually turns him into a cyborg?
6
Movie where a circus ringmaster turns people into animals
13
Story in which something turns men's lust into murderous impulse
7
Older dubbed film with partially ape-like evil henchmen
4
Movie with young man with amnesia, and machine to restore memory
3
A movie in which an alien with human form turns himself into a dog to avoid police