What story involves archeologists in the future that study the 20th century?

My mother remembers reading a book many years ago that took place in the distant future (hundreds or maybe thousands of years, I'm not sure). The idea of the book is that archeologists (of that time) have dug up some 20th-century artifacts, and are attempting to explain what they are and how they were used. Of course, they get everything wrong.

My mother cannot remember who wrote it, what it was called, or any more details than that. Any ideas?

Edit: Some other details that may help: It was a novel (i.e. not a short story) which took place on Earth. It took place a hundred or so years in the future, rather than thousands. No aliens. The Statue of Liberty was involved somehow (no, it wasn't Planet of the Apes). She thinks the narrator of the story was a teacher or professor of some kind.

Could it be "Motel of the Mysteries" by David Macauley?

An Archaeologist stumbles across a motel room, but misinterprets it as a burial chamber. Great illustrations in Macauley's style. 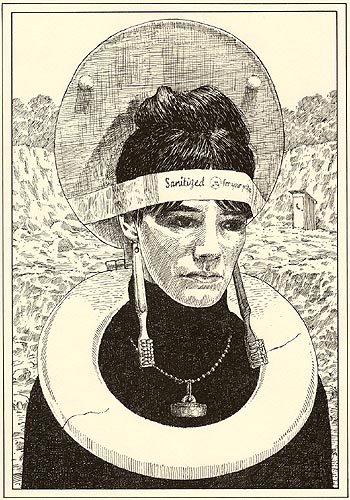 There is a whole subgenre of stories about future archeologists misinterpreting our time. A bunch of those stories are reviewed in Gary Westfahl's Locus article "The Addled Archaeology of the Future". If your mother is remembering one of the stories in that article then, based on the Statue of Liberty being involved, it's probably either James A. Mitchell's The Last American:

Like Poe's letter-writer, the Persians often misinterpret what they find in these cities. Seeing a sign on the hotel Astor House, the narrator assumes that Astor is "the name of a deity, and here is his temple." They assume that the purpose of the Statue of Liberty was to cast light on the city and cannot believe one of their men who visits it and reports that there are no signs of lighting devices. They come upon the surviving pillars that once supported one of the great bridges of New York, but noting how far apart they are, they conclude that this could not possibly represent the ruins of a bridge. Observing the statues of Native Americans that once stood outside cigar stores, the writer's comment is, "How these idols were worshipped, and why they are found in little shops and never in the great temples is a mystery." It is significant that these future Persians, like later archaeologists we will encounter, have a tendency to interpret enigmatic buildings and objects as aspects of a primitive, polytheistic religion; clearly, it never occurs to these Moslems that the ancient Americans might have practiced their own form of monotheism.

or else Robert Nathan's The Weans:

As one example of their faulty conclusions, the archaeologists assert that "The Weans were probably not at all a friendly or hospitable people" based solely on two pieces of evidence. First is New York City's Statue of Liberty, whose "one arm upraised" is interpreted as a sign of "a threatening attitude." Second is the discovery of an "inscription" reading "the dodgers were shut out." This reference suggests that Nathan's explorers are examining not only buildings and artifacts but also written documents: a table of baseball statistics, evidently found in a newspaper, is regarded as "a primitive form of banking," and there are a number of garbled references to literary writers such as Henry Wadsworth Longfellow, Ernest Hemingway, William Faulkner, James Joyce, and Dylan Thomas. Their other errors include: rendering the name of the city of Washington as "Pound-Laundry"; interpreting the name of labor leader Jimmy Hoffa as a common noun, "hofa"; and assuming from the term "hot dog" that the Americans "ate dogs, roasted." Again, the archaeologists are overly anxious to see evidence of primitive, polytheistic religions: they assert that "each city-state worshipped a different Divinity"; a fragmentary description of a rock'n'roll concert is thought to concern a religious event; and the once-influential gossip columnists Hedda Hopper and Louella Parsons are conflated as "a powerful Divinity named Hedda, or Lolly."

The quotations are from Westfahl's article.

Mitchell's The Last American was published in 1889. Nathan's 1960 book The Weans was based on two short stories, "Digging the Weans" (Harper's Magazine, November 1956) and "A Further Report on the Weans" (Harper's Magazine, April 1959). However, if your mother is sure her book was set a mere 100 years in the future, then it can't be either of these: Mitchell's book is set in 2959, Nathan's 6000 years in the future.

You might be looking for Eternity Road; one thousand years after a disease devastates mankind, the survivors find themselves living in a world populated by technological artifacts who use and purpose defies their understanding. The child of an explorer sets out to find a mythical repository of human knowledge known as Haven, guided by the existence of the book A Connecticut Yankee in King Arthur's Court.

From 1958 to 1968 I taught a Gettysburg College course on Old Testament history, literature and archaeology.

I often used Nathan Roberts' humorous article "Digging The Weans" in Harpers Magazine, Nov. 1956, to illustrate the hazards of interpreting artifacts from archaeological digs with insufficient understanding of their original context. Several years I made this required reading in the course.

A sequel entitled "More On The Weans" was also published in Harpers.

What she is remembering is a short story called "Pound Laundry". It was a satire of a future archeological dig of Washington DC. Part of it was as broken sign that had 'Washing' on one piece and 'ton' on the other. This was translated as Pound for ton and Laundry for Washing. There were also misunderstandings about things like the Greek type columns on many buildings. We read it in an anthropology class to show the errors that can happen in assumptions about the past. I think it was written by a well known science fiction writter.

23
Humorous story in which future archaeologists find a motel room and they believe to have found a great tomb similar to that of Tutankhamun
14
Name of Short story in which humanity is judged by a Mickey Mouse cartoon
7
Short story seemingly set in the past, but is really post-apocalyptic. People uncover US monuments (Staue of Liberty, Lincoln Memorial)

28
Identify a short story where a young boy is time-shifted several minutes into the future
10
Please help me identify this short story about possessed cryonic sleepers
14
Name of Short story in which humanity is judged by a Mickey Mouse cartoon
7
Story about kids and book that tells about good old times in schools
17
Seeking SF Short Story with time travel to the 20th century from a totalitarian future
6
Science fiction short story: beam transporting people into the distant future
6
Short story about future humans rediscovering the NASA Golden Record