How do we know they were called 'Ewoks'?

I just finished watching Return of the Jedi, and I don't remember actually hearing any of the characters referring to the teddy-bear-like creatures as 'Ewoks'.

Where did that name actually come from?

According to the Behind the Scenes section of the Wookieepedia article:

A little-known fact is that the Ewoks are never referred to by name in Return of the Jedi’s dialogue; the name only appeared in the script directions, the novelization, the movie’s credits, and other spin-off and promotional materials.

So, the name was set in the script already - just never mentioned.

Additionally, the origin of the name is such that it was intended to be related to the word ‘Wookiee’ (the rainforest scenes on Endor were original going to be on the Wookiee homeworld, and Ewoks were to be a related species to the Wookiees), and it is reminiscent of the Miwok people of Northern California.

They're specifically referred to as Ewoks in the original script...

"A strange little furry face with huge black eyes comes slowly into view. The creature is an EWOK, by the name of WICKET."

...as well as in the end-credits for Return of the Jedi. 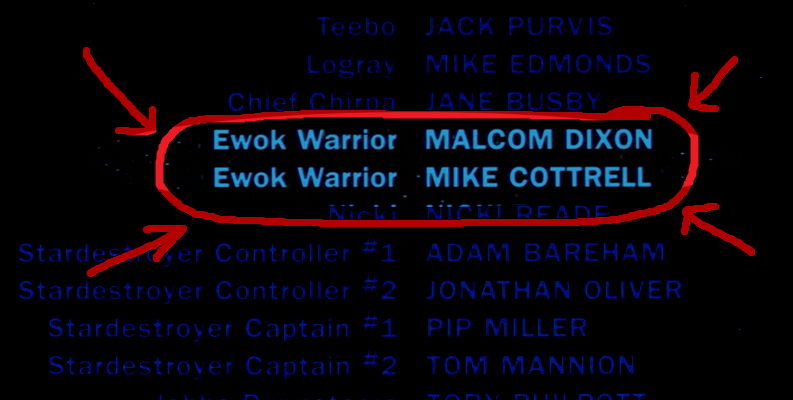 Obviously they're also named in the novelisation of ROTJ, interviews with George Lucas as well as enjoying their own films (Star Wars: Ewok Adventures, Ewoks - Caravan of Courage) and animated adventures under the name Ewoks 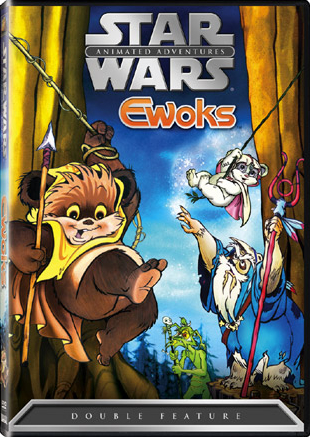 As to the origin of the Ewoks, the interview with George Lucas (below) makes it clear that the intention was that the Ewok moon was originally planned to be the home planet of the Wookiees but as the film series evolved, the Wookiees ended up being too tall and technologically advanced, leading to Lucas designing a new species.

The name 'Ewok' itself is a corruption of the word Miwok, a tribe who were originally indigenous to the woodland where the Endor scenes were shot.

They were never referred to as Ewoks within the films (though their species name was mentioned in the credits), though they may have been specifically named in the novelizations.

The Ewok's names (like most minor characters) only became known in the Extended Universe and the books. The Ewoks had a leg up, though: marketing. They were almost custom-made to sell toys. LucasFilm cashed in with a cartoon series (I think), live action movies, an extensive toy line, etc.

Empire was supposed to be based on the Wookiee home world but throughout the series Lucas had the Wookiees gain better technology. He wanted someone more primitive to beat the empire’s troops so he created the Ewoks. The name comes from the Miwok native american tribe and their language is based on the Kalmyk language from Russia.

No one mentioned or might not of heard of the spin off movie "Ewoks: The Battle for Endor" it was released in 1985, two years after ROTJ.

48
How did people know Emperor Palpatine's name before the release of Prequel Trilogy?
31
What is the singular source of Star Wars canonization?
13
What is the name of the vehicle used by the Jawas?

2
How many times has Abeloth escaped?
32
Were the Ewoks already planning an offensive or revolt?
12
Is there an astronomical name given to the Ewoks' home?
13
Why do the Ewoks have weapons of war?
12
How did the Rebels know the shield was down?
8
Did the Ewoks continue to think C-3PO was a god?
30
How often do ewoks eat sentients?
8
Is the Battle of Endor the first conflict/interaction between the Ewoks and the Empire?
7
Were Luke and Leia aware they had the same birthday?