What is the average number of deaths per episode?

While watching Game of Thrones and seeing people being killed left and right, I began to wonder:

I'm just wondering about an average, but a list that mentions the number of deaths for each episode would be good too.

Digg has produced a montage showing every single death in GoT.

Vulture.com uses a different methodology to convey the level of death in each episode of the first season, counting only murders and personal kills occurring on-screen. 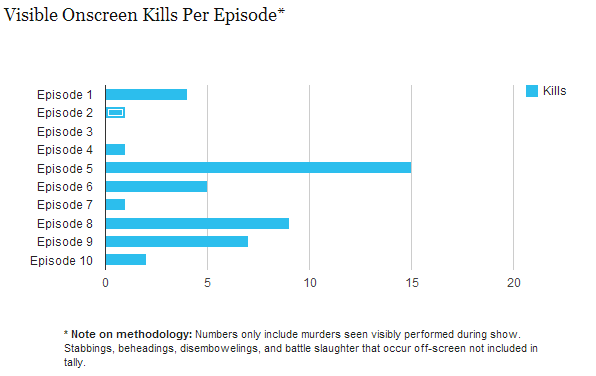 There is an amazing bit of journalism done over at the Washington Post, and it has been updated as the seasons have gone on.

As of this time, the page is updated for all of Season 8, last updated May 21st.

A death is counted only if:

3
Game of Thrones' Season 3 - Chapters Adapted from the Book?
21
What does Ned mumble at the end of Episode 1x09?
33
Why were there so many willing accomplices to the Red Wedding?
16
If Jon Snow became King of the Seven Kingdoms what would his regnal number be?
17
Why this character is punished instead of being honoured?