What happens to Cho Chang and Krum?

Do we ever hear what happens to either of them after that? 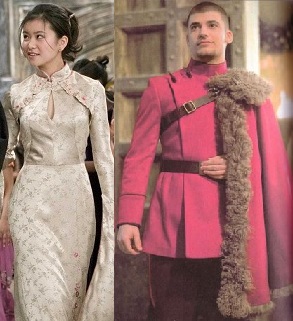 According to a 2007 interview with JKR, after the Second Wizarding War Cho Chang married a muggle and seems to have lived happily ever after. It's not known whether she had children. We don't see her on platform 9¾,

According to the latest release on Pottermore, Viktor Krum survived the Second Wizarding War and continues to play Quidditch. His fondest desire, having come out of retirement for the 2014 Quidditch World Cup is to win a final before he dies;

“Much interest has been generated by the return to the Bulgarian side of the previously retired Viktor Krum, who at 38 is old for a Seeker but whose stated aim is ‘to win the World Cup before I die.’ For this reason, Bulgaria is attracting support from those whose own countries have not qualified.”

JKR also noted in a live webchat that Krum found love on returning to his homeland.

Q: Did krum ever find love?

J.K. Rowling: Of course, though he had to go back to his native Bulgaria to do so.

We definitely hear about both of them in the final Potter book, "The Deathly Hallows"

They were all laughing so much that none of them noticed the latecomer, a dark- haired young man with a large, curved nose and thick black eyebrows, until he held out his invitation to Ron and said, with his eyes on Hermione, “You look vunderful.”

“Viktor!” she shrieked, and dropped her small beaded bag, which made a loud thump quite disproportionate to its size. As she scrambled, blushing, to pick it up, she said “I didn’t know you were – goodness – it’s lovely to see – how are you?”

Ron’s ears had turned bright red again. After glancing at Krum’s invitation as if he did not believe a word of it, he said, much too loudly, “how come you’re here?”

Harry Potter and the Deathly Hallows, ch. 8, The Wedding

And later about Cho Chang near the end, prior to the Battle of Hogwarts:

Before he could formulate a new question, however, Cho spoke again. “If you’d like to see what the diadem’s supposed to look like, I could take you up to our common room and show you, Harry. Ravenclaw’s wearing it in her statue.”

Harry Potter and the Deathly Hallows, ch. 29, The Lost Diadem

Cho Chang and Viktor Krum appear at least in one more book, the Order of the Phoenix, when Cho goes in a date with Harry (in fact, Cho appears a lot in the 5th book), and Krum seems to be pen pals with Hermione.

29
In Deathly Hallows, why is Cho Chang still at Hogwarts?

81
Why couldn't Harry see Thestrals at the end of Goblet of Fire?
13
Is Viktor Krum a good wizard?
16
What could Harry do that Krum couldn't?
7
Why did Draco Malfoy support Viktor Krum in the Triwizard Tournament?
28
How did Fred and George know the outcome of the Quidditch World Cup final?
11
Which tower did Harry go to in Goblet of Fire?
6
Victor Krum Tri-Wizard tournament performance
3
Did Hermione use Love Potion on Viktor Krum?