Discworld, The Colour of Magic: Rincewind and the Potent Voyager

I finished reading The Colour of Magic, and I think that something has eluded me.

Does anyone have an idea as to how Rincewind managed to "escape" the Potent Voyager?

Rincewind never needed to escape the capsule since he wasn't inside of it but rather on top of it as it went over the edge of the Disc:

The wheels slammed into it, but the only effect was to make the ship rock, Twoflower to lose his grip on the ladder and fall into the cabin, and the hatch to slam down with the horrible sound of a dozen fiddly little catches snapping into place. Rincewind dived forward and scrabbled at them, whimpering.

We can see this very clearly in this screencap the 2008 "Colour of Magic" mini-series: 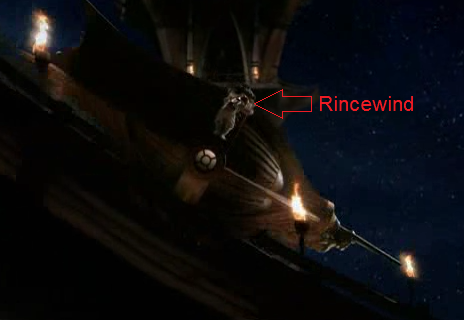 As the ship flies over the edge, Rincewind is chucked off the ship onto one of the trees in the rimfall. With no way of getting back up, eventually he decides to let go.

As to how he managed to get back onto the disc, in the sequel novel The Light Fantastic we learn that the Seven Ultimate Spells detected that the "Eighth Spell" lodged in Rincewind's head was about to leave the Disc and contrived to cast an enormous 'change spell' to teleport him somewhere closer to the centre.

“It’s a Change spell,” said Trymon. “The whole world is being changed.”

Death also makes it abundantly clear what the spells in the Octavo were up to:

THAT? OH, THAT WAS JUST A READJUSTMENT OF REALITY. I UNDERSTAND THE OCTAVO WAS ANXIOUS NOT TO LOSE THE EIGHTH SPELL. IT WAS DROPPING OFF THE DISC, APPARENTLY.

Rincewind is not shot off the edge in the Potent Voyager, but on it:

He also saw a gang of men climbing desperately over the lower slopes of the launching ramp and manhandling a large baulk of timber on to the track, in a frantic attempt to derail the ship before it vanished over the Edge. The wheels slammed into it, but the only effect was to make the ship rock, Twoflower to lose his grip on the ladder and fall into the cabin, and the hatch to slam down with the horrible sound of a dozen fiddly little catches snapping into place. Rincewind dived forward and scrabbled at them, whimpering.

At this point he is clinging desperately to the top of the Voyager. A few paragraphs later it goes over the edge, with Rincewind still on the outside:

Rincewind stood up. There was only one thing to do now, and he did it. He panicked blindly, just as the ship's bogeys hit the little upgrade and flung it sparkling like a salmon, into the sky and over the Edge.

He then wakes up draped over a tree growing out of the Rim itself:

He was alive and lying covered in bruises in a small thorn tree that was growing in a crevice in a rock that projected out of the foaming white wall that was the Rimfall.

It's not explicitly stated, but presumably he fell off the top of the Voyager as it went over the edge and landed in the trees of the Rimfall rather than falling with the Voyager.

The book ends with him letting go and falling into the universe; in the sequel, as mentioned by @Richard, the Great Spells contrive to get him back onto the Disc.

(The Luggage also goes off the Edge outside of the Potent Voyager, by the way; only Twoflower and the sea troll, Tethys, are inside it.)

Not the answer you're looking for? Browse other questions tagged terry-pratchett discworld or ask your own question.

75
What order should I be reading the Discworld books in?
16
What is headology in Discworld?
21
What are the sources of the imagery for the Discworld resting on the backs of the four elephants and Great A'tuin?
10
Does Terry Pratchett's Discworld follow on from Strata?
12
Discworld quote about students getting in the way
4
How many years have passed between "The colour of magic" and "Rising Steam"?
6
Where on Disc did Tethis go?
32
Looking for a Discworld book a quote is from (and the full quote)
9
What specific works of fantasy were parodied in The Colour of Magic?