What are the seven hells?

In Game of Thrones, there are often mentions of the Seven Hells.

What are those Hells? Does each of the Seven Gods have a separate hell or something?

There is no information regarding what worshipers of the Seven believe about the hells other than there being seven of them. It may be that the Westerosi don't believe much beyond that, most religions in A Song of Ice and Fire seem largely agnostic about the afterlife.

If I had to guess though I would say that they believe in Seven Hells because seven is the holiest number to their faith and all significant things come in seven. It seems unlikely that each is governed by or associated with one of the Seven since only the Stranger is associated with death.

There is little to no information on the Seven Hells, here is what I've managed to draw out of the quotes from the books though.

Arya believes them to be dark and deep.

If the room with the monsters had been dark, the hall was the blackest pit in the seven hells. Calm as still water, Arya told herself, but even when she gave her eyes a moment to adjust, there was nothing to see but the vague grey outline of the door she had come through. She wiggled her fingers in front of her face, felt the air move, saw nothing. She was blind. A water dancer sees with all her senses, she reminded herself. She closed her eyes and steadied her breathing one two three, drank in the quiet, reached out with her hands.
A Game of Thrones, Arya III

They're hot and fiery.

When she told Tuffleberry what Weese had said, the brewer cursed loudly. "You tell Weese my lads got duties to attend to, and you tell him he's a pox-ridden bastard too, and the seven hells will freeze over before he gets another horn of my ale. I'll have them barrels within the hour or Lord Tywin will hear of it, see if he don't."
A Clash of Kings, Arya VIII

"Burn in seven hells," the Hound cursed. "You, and Thoros too." He threw a glance at the red priest. "When I'm done with him you'll be next, Myr."
A Storm of Swords, Arya VI

To this day, no one knows what caused the Doom. Most say that it was a natural cataclysm—a catastrophic explosion caused by the eruption of all Fourteen Flames together. Some septons, less wise, claim that the Valyrians brought the disaster on themselves for their promiscuous belief in a hundred gods and more, and in their godlessness they delved too deep and unleashed the fires of the Seven hells on the Freehold.
The World of Ice and Fire, Ancient History: The Doom of Valyria

Catelyn believes they are deep and full of punishment.

Her quote also implies that the Seven Hells are layered on top of each other.

"You should. Your crimes will have earned you a place of torment in the deepest of the seven hells, if the gods are just."
A Clash of Kings, Catelyn VII

"Our lives are candle flames, says The Seven-Pointed Star. Any errant puff of wind can snuff us out. Death is never far in this world, and seven hells await sinners who do not repent their sins. Pray with me, Jaime."
A Feast for Crows, Jaime IV

Egg believes there to be a Lord of the Seven Hells who deals in black arts.

"Four," said Egg, "but no children. Whenever she gives birth, a demon comes by night to carry off the issue. Sam Stoops' wife says she sold her babes unborn to the Lord of the Seven Hells, so he'd teach her his black arts."
"Highborn ladies don't meddle with the black arts. They dance and sing and do embroidery."
"Maybe she dances with demons and embroiders evil spells," Egg said with relish. "And how would you know what highborn ladies do, ser? Lady Vaith is the only one you ever knew."
The Sworn Sword

Side note, most of the times Seven Hells is said it is used to curse, swear or show annoyance. For example:

By then Jon, Jory, and Theon Greyjoy had all dismounted as well. "What in the seven hells is it?" Greyjoy was saying.
A Game of Thrones, Bran I

"Seven hells," Robert swore. "Cersei, look at her. She's a child. What would you have me do, whip her through the streets? Damn it, children fight. It's over. No lasting harm was done."
A Game of Thrones, Eddard III

In conclusion although we don't get a specific mention of each of the seven we get a general sense of what they are all like together. Taking Arya's and Catelyn's quotes about the depth of the layers and that they appear to be on top of each other I'd say the Seven Hells are similar to the nine circles of hell in our world. 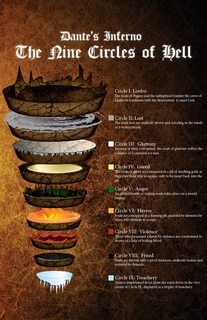 Side note: I've tweeted Elio and Linda, the co-authors of The World of Ice and Fire, at westeros.org to see if they had any more information on the topic. As it turns out they do not.

@westerosorg Hello! I've been doing some research into the Seven Hells but have found next to nothing. Do you have any more information on them? Thanks!
Nothing more than what you've got. Good work pulling together the quotes.
Twitter, @westeros.org

In a Barristan Selmy chapter (chapter 70 The Queen's Hand) in ADWD (The danish translation) he states that half of the 7 hells consist of fire. Whether he meant 3 or 4 is unknown.

The seven deadly sins. And correspondingly the seven heavens of the seven virtues.

13
What are the different provinces mentioned in a Game of Thrones?
23
Do the septons and septas of the Seven have magic powers?
18
Do atheists exist in the world of A Song of Ice and Fire?
10
What is the status of science in the Seven Kingdoms?
21
Why was Robb Stark married under the Light of the Seven?
5
What is the Northern equivalent to a Knight?