I recently came across a particular essay by the author of The Last Ringbearer, which states:

The Middle Earth has several built-in physical defects, and there’s no getting away from that. In his well-known essay Must Fantasy Be Stupid? Pereslegin provides a detailed classification of errors commonly committed by fantasy authors. He uses Tolkien’s work as an example of one of them, an “irreversible professional error”: “It occurs in a geologically unstable world....[]”

....[] It turns out that all the seeming contradictions of Middle Earth’s natural history can be resolved with a single assumption: that Tolkien is describing only the northwestern part of the local landmass, rather than the whole thing.

Now, this assumption had always been fact to me, so much that I assumed that I definitely did read it somewhere in the letters / HoME etc. Can someone point me to a definite source of this info from Tolkien's own pen? And if possible, a date on when that info became publicly available?

ETA: The info in specific referring to anything Tolkien himself mentioned about

Let me introduce you to Ambarkanta Map V, published in History of Middle-earth 4, The Shaping of middle-earth: 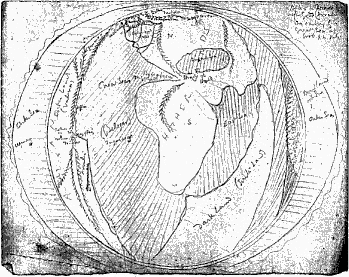 This map was designed before LotR was written, so you won't see any of the familiar geography from that on it, but all of the Silmarillion geography is present and correct and you can see that yes indeed, the action is confined to a relatively small region in the north-west of the world.

At this stage it's necessary to quote from Letter 131:

Moving on, you'll also see that Middle-earth is not the only continent in the world and that there are also western, eastern and southern continents. For correlations to real-world geography have a look at southern Middle-earth (the area where the word "Hither" is written) : remind you of Africa?

Additionally, with this being a First Age map, it actually represents the original flat-world cosmology, so considerations relating to real-world geography should probably be ignored. This was a magical and mythical age, so it seems wrong to try to find a real-world basis for anything you see here.

Finally, the world was made round at the end of the Second Age, which created new lands and new continents, so it's necessary to quote from the end of the Akallabeth:

1
Is Middle Earth supposed to be a pre-historic England?

4
Tuor, Beren and Luthien - the gifts of Mortality and Immortality from Eru vs the Valar
10
Why are Tolkien’s Elves tall?
15
How did non-native plants find their way to Middle-earth?
9
How can Tolkien's characters see stars during the daytime?
13
What is the chronological reading order for the fictional elements of The History of Middle-earth series?
25
What exactly is Middle-earth in Tolkien's Legendarium?
7
Did Tolkien write any parts the Lord of the Rings in Westron?
5
Did Tolkien intend to expand the Ents' role in The Silmarillion?