Why was the One Ring so fascinating?

In Lord of the Rings, why was the One Ring so fascinating? I mean, each and every person (or Hobbit) wanted to have it when they saw it. Even Frodo, who had the ultimate task of destroying the ring, ended up refusing to throw it in Mount Doom.

The Ring represents the acquisition of Power. As the saying goes,

When faced with the opportunity to acquire Power if you will only put on the ring, it is hard to turn it down.

Note that the least swayed are the Hobbits, who are the least ambitious, and Gandalf who perhaps understands what power can do refused to even touch it.

One of the themes running through LotR is that Men are particularly corruptible; they are the reason the ring wasn't destroyed when Sauron was defeated the first time, it is the Men of the White Mountain that are corrupted by Sauron and forfeit their oath to Isildur; the nine rings given to men corrupted them into becoming the Nazgul, while even the Dwarves only became greedy rather than submitting to the will of Sauron.

As with sci-fi & fantasy in general, different races represent different facets of humanity. In a way, Tolkien is making a point about our desire to affect the world and how it can make us vulnerable to corruption, even with the best intents - well explained in the paper The Corruption of the Lord of the Rings.

I've found the original of the quote above:

I cannot accept your canon that we are to judge Pope and King unlike other men, with a favorable presumption that they did no wrong. If there is any presumption it is the other way against holders of power, increasing as the power increases. Historic responsibility has to make up for the want of legal responsibility. Power tends to corrupt and absolute power corrupts absolutely. Great men are almost always bad men, even when they exercise influence and not authority: still more when you superadd the tendency or the certainty of corruption by authority. There is no worse heresy than that the office sanctifies the holder of it.

The Ring itself was supposed to be the most powerful ring of all... Remember the line "One Ring to Rule them All.."

The ring was crafted by Sauron so it became evil. It is also have said to be part of him.

The Ring of Power was created by Sauron. They are one. Sauron survived because the Ring did.

Because the ring is evil it will start to warp and bend the mind of people who are in possession of it making them more and more evil the more they keep and wear it.

Because the ring was created by Sauron it became evil in itself. The ring caused those who possessed it to become obsessed with it, so much so that they might kill anyone who showed too much interest in it or attempted to touch the Ring. With an evil will of its own, the Ring would make attempts to return to its Master. It could "call out" subliminally to other persons, in an attempt to get them to pick it up or possibly kill the current owner. It was also capable of slipping unnoticed from the owner's finger, leaving him vulnerable to attack or to gain a new owner that would help get the Ring back to Sauron. Frodo Baggins was warned by Bilbo that the Ring tended to "slip away" at odd times, and compensated for this by wearing it on a chain around his neck.

One of the best examples was Smeagol whom after centuries of having the ring became Gollum.

Just look at the physical transformation : 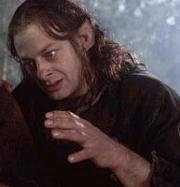 Not to mention the mental change...

Around the year TA 2463, Sméagol became the fourth Bearer of the One Ring, after Sauron, Isildur, and Déagol. Déagol was his cousin, and on Sméagol's birthday, they went fishing in the Gladden Fields north of the mountains.

It was there that Déagol found a gold ring, after being pulled into the water by a large fish. Almost immediately, Sméagol fell to the power of the ring and demanded it as a birthday present. When Deágol refused, Sméagol promptly went into a barbaric rage and fought with Deagol over the ring and strangled him to death and took the ring as his own. Sméagol was quickly corrupted further by the ring and banished by his people, turned by his grandmother out of her hole, he was forced to find a home in a cave in the Misty Mountains in around TA 2470. The Ring's malignant influence twisted his Hobbit body, as well as his mind, and prolonged his life far beyond its natural limits. He called it his "Precious" or his "Birthday Present," the latter as a justification for killing Déagol.

The ring corrupted Smeagol easily and caused him to kill his own cousin, and there's plenty of moments in the books and movies that show the Ring's evil influence tempting characters to kill each other just to keep the ring for themselves.

Essentially the ring wasn't so much as fascinating that it was evil and manipulated people into becoming obsessive over it to the point that they can't part with it...

The power it held over Gollum was so great that even as the ring fell into the fires of Mount Doom that Gollum didn't care that he was plunging into his death as he had finally gotten his "Precious" back.

Besides being a powerful artefact that could greatly enhance one's power (for example Gandalf says that should he wear the ring, he would become far too terrible a power), which is presumably the first reason for Boromir's desire of it, it also exerts a magical influence on anyone who sets eyes on it.

Sméagol becomes enamoured to the ring as soon as he finds it, Frodo remarks how very beautiful it is when examining it with Gandalf, and of course, Bilbo, Frodo, Isildur and nearly all the ring-bearers find it very difficult to part from it. This suggests that the rings consumes those who behold it with an unnatural desire to possess it, so that even if they consciously refuse the power that it would give, they would still be tempted to put it on, as Gandalf states numerous times.

The ring was a kind of Horcrux (if not the mother of all!) if we take Harry Potter universe. The reason that Sauron's spirit survived without physical form is due to the survival of the One ring. The rings given to the races of Men, Elves and Dwarves were also made of the same material (Mount Doom magma) so as to establish a connection with all. You corrupt the master ring (the Mother), its passed to all the other and vice versa. Helped Sauron to gather the lifefo-rces and power of diverse races (a brilliant plan indeed!) making him the formidable foe in the east!.

31
Why was Frodo unable to destroy the Ring?