What is Old Nan's background?

Old Nan has been in Winterfell for multiple generations, and it is not clear exactly how old she really is. It's stated in awoiaf wiki that she came to Winterfell to wet-nurse a previous Brandon Stark (which one is not known). She is known for her stories, which may or not be true, but seem to focus on the supernatural.

With the knowledge she possesses, could old nan be a child of the forest? Greenseers could have prophesied the coming of a "Brandon Stark", and she could have been planted there in advance to await his birth and provide him specific knowledge during his childhood to prepare him. For example she give him information on the Last Hero, the Night's King, etc. The previous Brandon might have been the wrong one, but Bran is most likely the one team "Bloodraven" have been waiting for. Even Hodor could have been planted there specifically to carry Bran around and Warg into, if it were prophesied beforehand that Bran would fall and become crippled.

Sorry this is conspiracy-theory-ish/speculative, but I am interested in any thoughts people may come up with.

No, there is little chance Old Nan was anything other than an old woman with knowledge of folklore.

There is no indication Old Nan had greensight, or that she looked like one of the Children:

The children were smaller than men with nut-brown skin, dappled like a deer's with paler spots. They had large ears that could hear things that no man could hear.

They usually had large eyes, great golden cat's eyes, that could see down passages where a boy's eyes saw only blackness. They have vertical, slit-like pupils

(disclaimer: I don't have the books with me, and I don't know what's the source of the above description).

Also, while she seems like the stereotypical wise old woman, she is shown to be wrong about things. For example, her description of Wildlings as little more than monsters in A Game of Thrones is pretty ignorant; pretty much what any regular person who has never been beyond the Wall would say. A Child of the Forest would certainly know better.

First off I'll just break your theory by saying Old Nan is not a Child of the Forest. Just compare the following images from the show (Old Nan on the left and Leaf on the right for clarity). 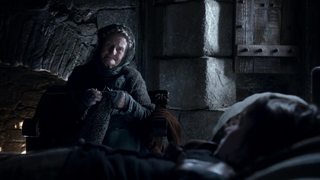 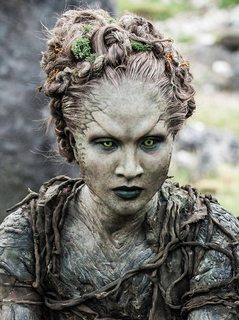 We get the following insight into some of Old Nan's background in the following passage given by Bran but note that even Bran says there are ambiguities in how Old Nan tells of her background.

She was a very ugly old woman, Bran thought spitefully; shrunken and wrinkled, almost blind, too weak to climb stairs, with only a few wisps of white hair left to cover a mottled pink scalp. No one really knew how old she was, but his father said she'd been called Old Nan even when he was a boy. She was the oldest person in Winterfell for certain, maybe the oldest person in the Seven Kingdoms. Nan had come to the castle as a wet nurse for a Brandon Stark whose mother had died birthing him. He had been an older brother of Lord Rickard, Bran's grandfather, or perhaps a younger brother, or a brother to Lord Rickard's father. Sometimes Old Nan told it one way and sometimes another. In all the stories the little boy died at three of a summer chill, but Old Nan stayed on at Winterfell with her own children. She had lost both her sons to the war when King Robert won the throne, and her grandson was killed on the walls of Pyke during Balon Greyjoy's rebellion. Her daughters had long ago married and moved away and died. All that was left of her own blood was Hodor, the simpleminded giant who worked in the stables, but Old Nan just lived on and on, doing her needlework and telling her stories.
A Game of Thrones, Bran IV

"I could tell you the story about Brandon the Builder," Old Nan said. "That was always your favorite."
Thousands and thousands of years ago, Brandon the Builder had raised Winterfell, and some said the Wall. Bran knew the story, but it had never been his favorite. Maybe one of the other Brandons had liked that story. Sometimes Nan would talk to him as if he were her Brandon, the baby she had nursed all those years ago, and sometimes she confused him with his uncle Brandon, who was killed by the Mad King before Bran was even born. She had lived so long, Mother had told him once, that all the Brandon Starks had become one person in her head.
A Game of Thrones, Bran IV

We also know that Hodor, aka Walder/Wylis, is a Grandson of Old Nan's and so we can again only assume that she is a very old woman though she appears to have always been old.

"Hodor!" Hodor agreed happily. He ducked to get his great shaggy head under the door. Hodor was nearly seven feet tall. It was hard to believe that he was the same blood as Old Nan. Bran wondered if he would shrivel up as small as his great-grandmother when he was old. It did not seem likely, even if Hodor lived to be a thousand.
A Game of Thrones, Bran IV

"Hodor's not his true name," Bran explained. "It's just some word he says. His real name is Walder, Old Nan told me. She was his grandmother's grandmother or something." Talking about Old Nan made him sad. "Do you think the ironmen killed her?" They hadn't seen her body at Winterfell. He didn't remember seeing any women dead, now that he thought back. "She never hurt no one, not even Theon. She just told stories. Theon wouldn't hurt someone like that. Would he?"
A Storm of Swords, Bran II

The Order of the Green Hand just put out a video on Youtube saying she could be Rohanne Weber. It's called "Mysteries, Myths and Motives: Who is Old Nan?"

28
Why did Ser Gregor kill Ser Hugh?
11
Where does the background story in A Song of Ice and Fire come from?
17
Would Gared have been executed if he just returned to Castle Black?
14
Have other men been the Three-Eyed Raven in the past?
10
Do we ever find out who sent the catspaw after Bran in the show?
10
What is the place where Will was executed?
24
How well-known was Aerys Targaryen's madness outside the noble class?
2
Why didn't King Jaehaerys Targaryen think himself a Kinslayer?
30
Why did Robert pick unworthy men for the White Cloaks?
6
Why didn't Aerys II or Rhaegar let the world know that Rhaegar married Lyanna?