How does the Flash perceive time?

Under the assumption that Barry Allen can think as fast as he can run, how does he perceive things around him?

Is everything else just moving at a minuscule rate to him? How does that not drive him insane?

Does he have the ability to turn his powers off?

It is likely the Flash (and other speedsters like him) have complete control of the temporal aspects of their speed powers because it would otherwise be intolerable to be faster than everything around you and having no control of how you were able to perceive it.

Anyone capable of moving at speeds greater than human reflexes will allow are considered to be utilizing some aspect of super-speed. But the concept of super-speed in comics is a bit more complicated than it would initially appear. 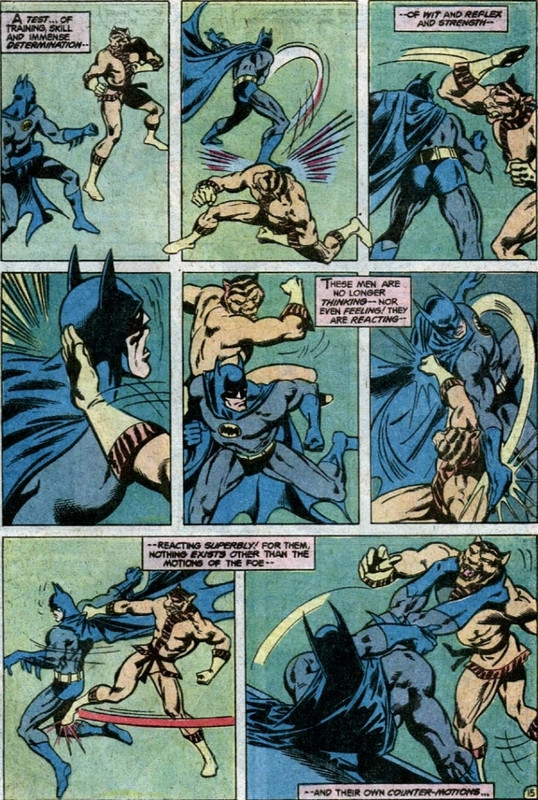 Bronze Tiger and Batman engaging in combat in a mushin state; both are acting reflexively, moving faster than their conscious minds could would normally.

In the case of superspeed users, mushin is either how they live completely, reflexively activating and utilizing their powers, without consciousness of that power use, or that they are in complete control of their awareness and interaction with the flow of time around them. This makes using superspeed an ability with a dazzling array of permutations, physical, mental and temporal.

"Fast Reflexes are enough for me" 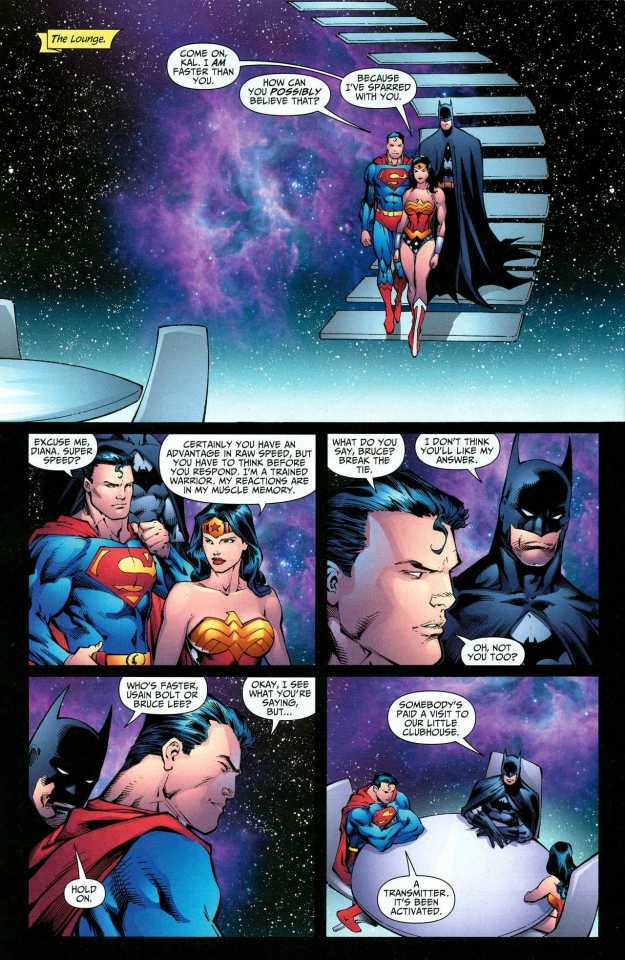 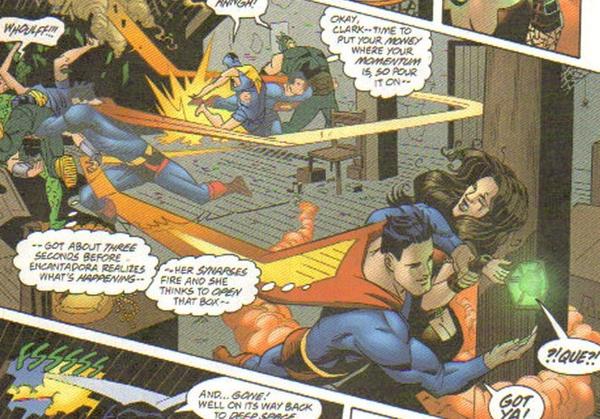 "I'm so fast, I have to move through time to use my powers."

Now beings such as the DCU's Flash, whose abilities allow him to move faster than the material universe allows, would have to have a change in state, because there is no way his mental capacity (his human brain network) would have the ability to keep up with speeds that he sustains in his superspeed state. He would be moving faster than his electrically-charged brain could send messages.

I support the concept of the Flash altering temporal physics and his ability to act in a Heisenburg-like fashion with a feat he performed to save the population of a city from a nuke. In 100 picoseconds he saved half a million people, two at a time. This meant he had to be moving many times faster than the speed of light, in atmosphere! 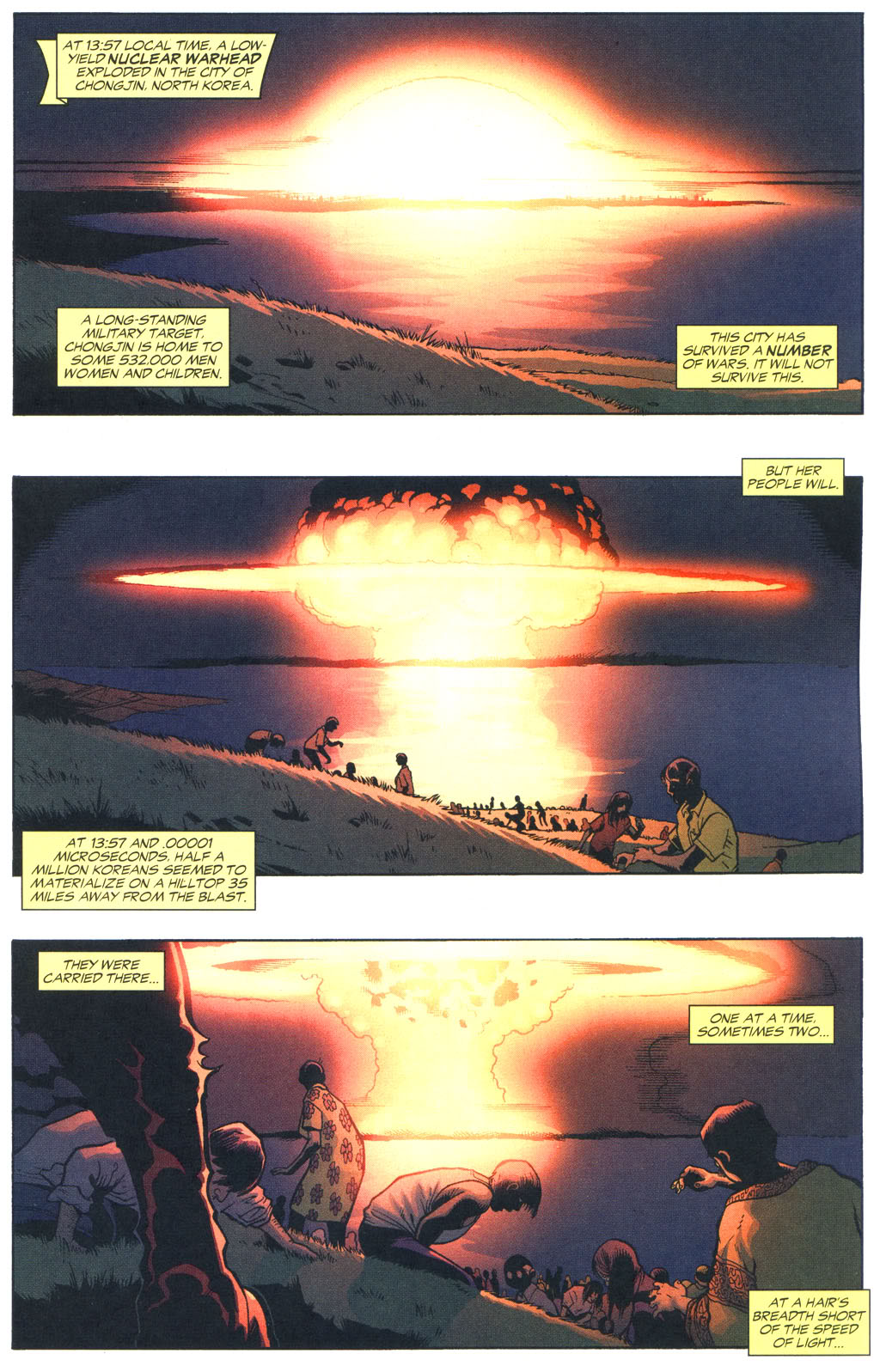 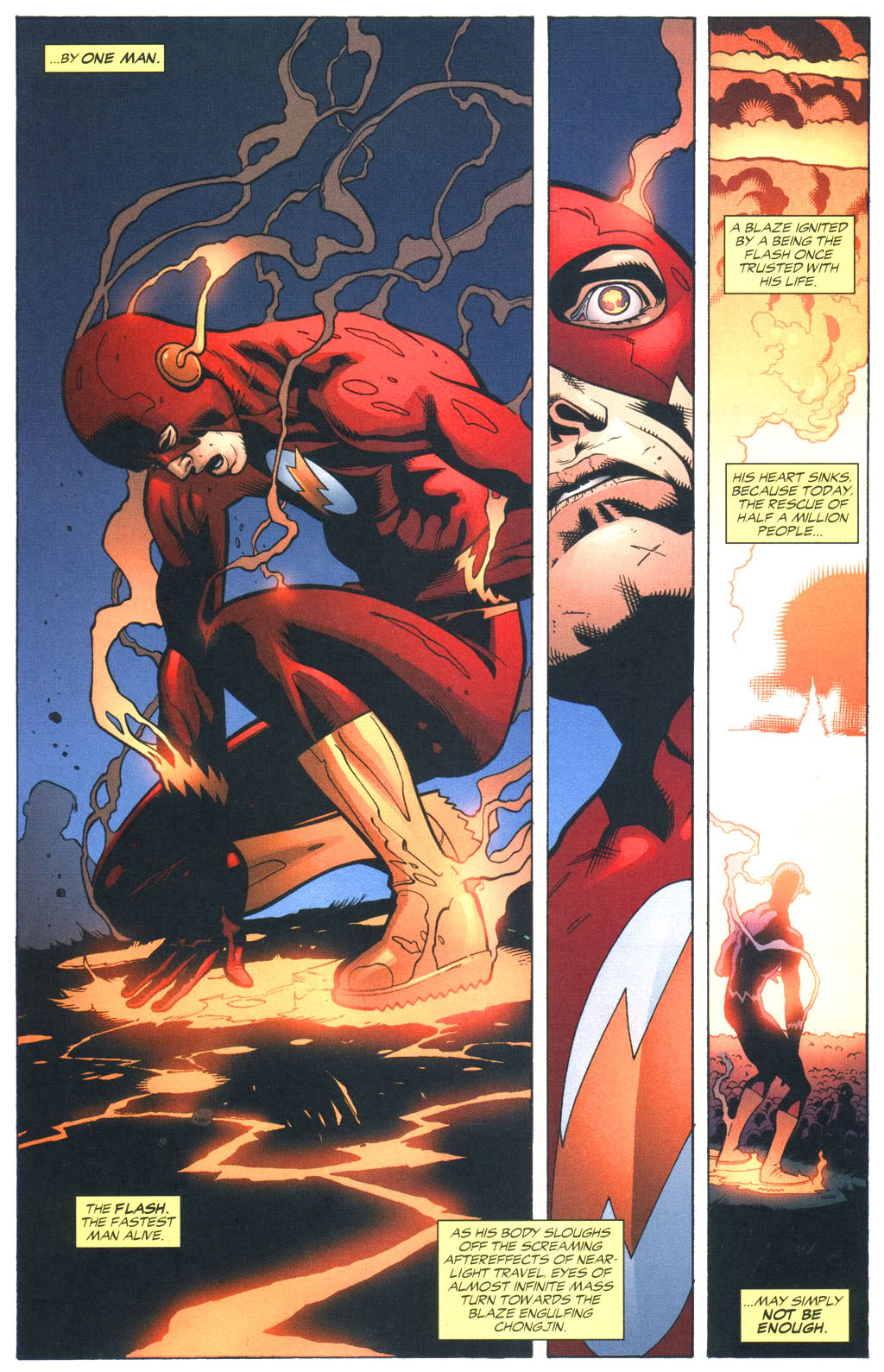 The Need for the Speed Force

The energy required for him to manipulate the time stream in this fashion would be fantastic, and I believe this was what led to the idea of the Speed Force storylines, because otherwise there could be no way physically for any Flash to move faster than he could think without causing catastrophic damage to the environment. 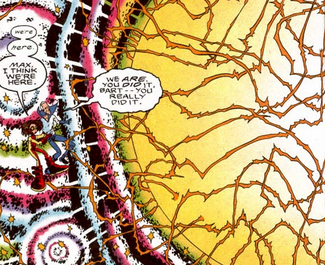 A physical representation of the Speed Force. Panel from Impulse #66. Artwork by Ethan Van Sciver.

This temporal manipulation allows him to move through time in a limited or controlled fashion with the proper practice, skill or technological augmentation such as the cosmic treadmill popular in the 1970s and 1980s Flash stories. 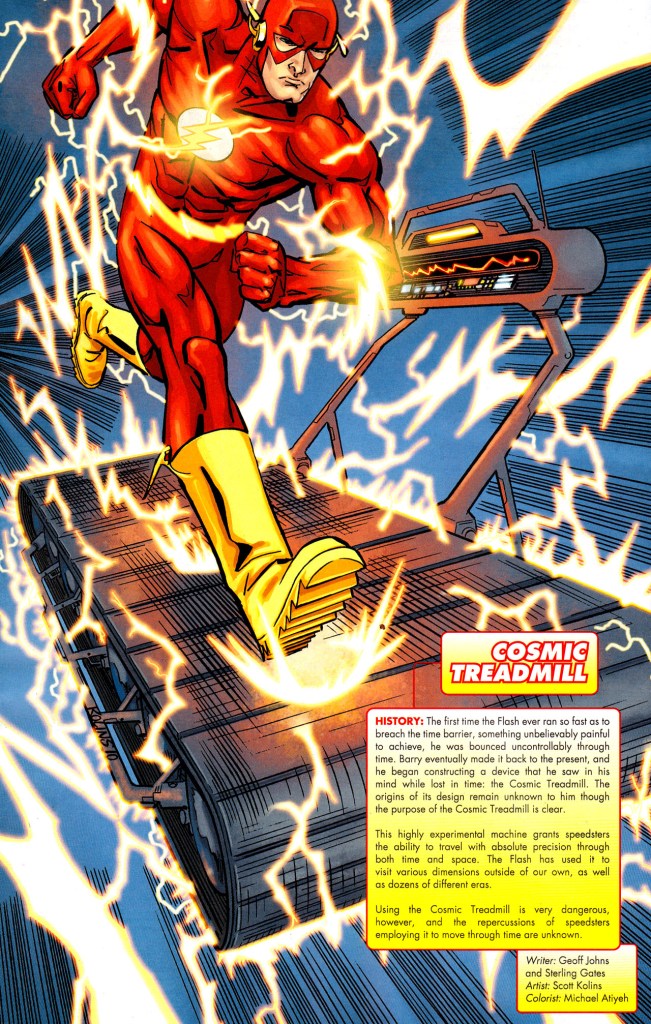 This transformation of the Flash's thinking gives him an expanded consciousness and he takes on a more Heisenburg-like positioning; he simply wills himself through his perception of running to be where he wants to be and he crosses that distance manipulating time between where he starts to where he finishes. 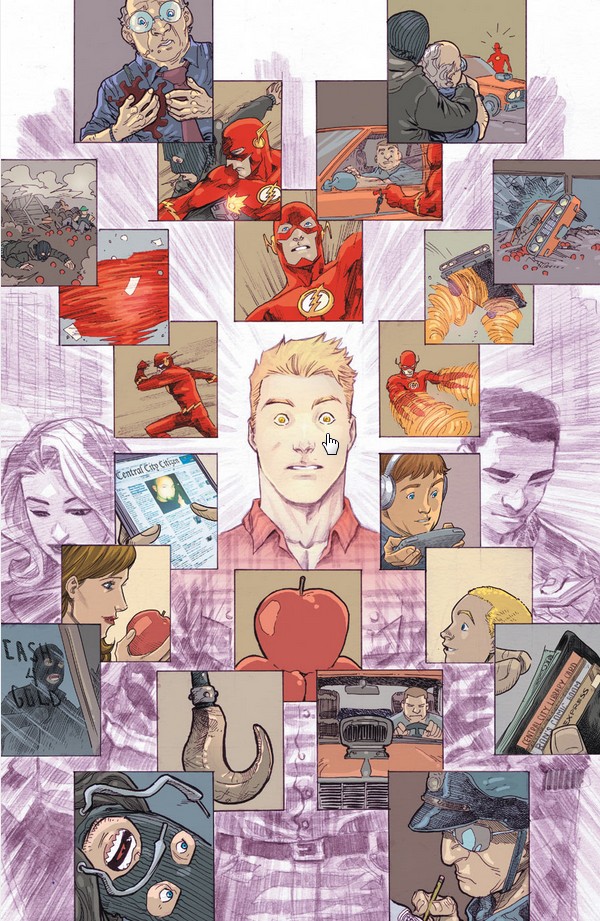 See SFSE Article for amplification on the Flash's temporal awareness: Can the Flash See the Future Now?

Just as with his movement speed, he's able to control how fast he perceives time. So day to day, he spends his civilian time mostly perceiving time at the rate we all do. When fighting crime he'll vary it to keep up with how quickly he needs to be moving.

It has been shown in Mike Baron's run on The Flash (80s) when Wally West has inherited the mantle and could only move at the speed of sound (about 750 mph) he he was not "on" at all times. In fact he did live the majority of his life as you and I do. What is interesting is that his powers would come on both through force of will or in the presence of certain stimuli.

This is best illustrated while he was watching a film in a theater and felt something touch the back of his neck. It turned out that a madman had opened fire in the theater and the first bullet had outpaced the sound of the gunfire to strike him. With his powers on he quickly removed the bullet before it pierced him rounded up all the others making their way "slowly" through the air and defeated the gunman before anyone else was aware of what had transpired before he went back into "real time".

Flash can change his running speed. I'm sure he has control over his mental processing speed, as well. Wally has expressed on more than one occasion that one of his worst fears is getting stuck in "On" mode, moving at super speed forever. He gets his powers by tapping into the DC-coined "Speed Force", and he is afraid that, someday, it may consume him.

In an Grant Morrison JLA Story Clark Kent just writes an Article with Super Speed when Lois enter the Room an say his Name. But for Clark everything around him was in Slow Motion before he slows down. The reader see this through the elongated first letter, Kuuuuuuuuuuhhlark. Something similar happens in "the dastardly death of the Rouges" when Captain Boomerang hits an Helicopter and Barry Allen rescued the crew.

Taken from ComicVine: "While [Barry Allen was] working late one night at the Police lab, a bolt of lightning came through the open window; striking a chemical rack nearby ... When he stood he found himself unharmed but incorrectly found that time had slowed down when in reality he was moving at super speed" So, originally he was confused by his super power and, presumably, once he realised the truth was able to cope with it being he was moving super fast, rather than everyone else was slow.

Everyone knows the flash uses the Speed force, as well as many other speedsters in his and other universes, to move or appear to move at speeds exceeding the speed of light. Different situations have perceived the flash using his abilities in a way that leans to several sides. I a few Justice League movies the flash and other speedsters would "Vibrate" there particle at an extremely accelerated rate that they became pure energy. Other times it is as if he uses the speed force to manipulate time to where the world around him is almost motionless. I wonder. If flash does exceed the speed of light,is the world he sees when moving faster than light dotted black due to the gaps in lights particles? Or maybe they are to small.

If you move very fast, or slow down time around you, light would be red-shifted. The upshot of this is that the Flash could see ultraviolet, x-rays or even gamma rays depending on how fast he was going at the time.

So, the Slash has x-ray vision, and no one seems to have noticed until now.

My answer doesn't have nearly as much evidence as the guy above, but my headcanon is that Barry is slower in time than everyone else. His brain only conducts neurons as quickly as a human brain, he heals normally for a human, he burns the same number of calories over the same distance as a human, but time is slower for him.I mix a couple sources, "The Ballad of Barry Allen" by "Jim's Big Ego", who is the Flash's creator's nephew, and the CW's properties. Early on in the CW show, Barry frequently enters hypoglycemic shock, cured by Cisco's super calorie bars. In the pilot, his heart beats at an extremely accelerated rate, despite barry being in a coma. He heals from broken bones in hours, not months. This suggests that he moves through time more quickly, as a single superpower. Relative to himself and other speedsters, he is normal.

My other source, the song, depicts that Barry is constantly moving at this pace, and cannot slow his brain down so much that crime fighting does not bore him. He treats saving people falling from bridges as a casual stroll down the road. even the wings of a hummingbird are slow. He can't hold a conversation or live a normal life.

The hole I'm having trouble filling is how he doesn't age.

57
Why isn't The Flash unstoppable?
18
What is the best scientific explanation for how The Flash moves so fast without issue, or is it just "magic?"
14
Does the Flash have use for a computer/programming and if so how does he deal with their slowness?
14
Does Flash age slower because of his ability to run at relativistic speed?
20
Can the Flash see the future now?
0
What and how do people (and The Flash himself) experience while in his speed aura?

18
What is the best scientific explanation for how The Flash moves so fast without issue, or is it just "magic?"
11
Can The Flash think faster?
6
Can the Flash use his powers and super speed without the Speed Force (e.g. outside the DC universe)?
97
Has an injured Flash ever used super-speed to walk on his hands?
6
In what comic do several people each get different individual Superman powers?
8
Why did Superman let the bomb explode in Batman v Superman?
5
Has Savitar become slower?
1
Does the Flash have super strength?