Story of Captain Picard assuming command of the Stargazer

In the TNG episode "Tapestry," Q is talking about the Picard that would never be if Picard had made a different choice in picking a fight with the Nausicaans. One of the events he mentions is the Picard who would “take charge of the Stargazer’s bridge when its captain was killed.” I know it isn’t mentioned again in the TV series, but is the story of that event detailed in any of the books or comics or other sources?

Yes! Several in fact all by Michael Jan Friedman:

But it all started with one of the very first TNG novels, also by Michael Jan Friedman, Star Trek: The Next Generation Reunion - in which the remaining crew of the U.S.S. Stargazer reunite to see a former officer installed as ruler of the Daa'Vit Empire. 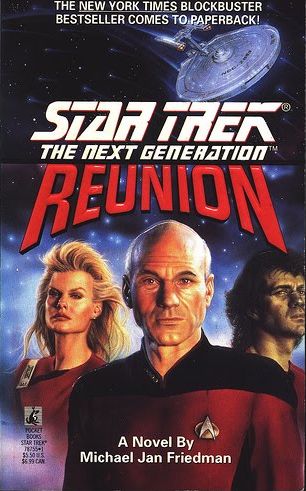 The reunion turns deadly when an assassin begins eliminating Stargazer crew members one by one. Picard's present and former shipmates must join forces to solve the mystery of the assassin who threatens the peace of the entire galaxy.

There are also several other novels and comics that tie-into Picard's past:

Not the answer you're looking for? Browse other questions tagged star-trek star-trek-tng star-trek-q jean-luc-picard or ask your own question.

16
How is it remotely a good idea to fly into an anomaly you know nothing about?
30
When/How would Star Trek captains update their log?
56
Why aren't there any main Federation battleships in the Star Trek universe?
6
Why didn't the Enterprise disappear in the Star Trek movie First Contact when the Borg traveled back in time?
9
Why didn't the Federation get Picard involved when Gowron pulled out of the Khitomer Accords since he is “Arbiter of Succession?”
12
Is Sisko referring to the events of First Contact here and if so how does it affect things?
10
Why does Captain Picard drink tea?
9
Was Captain Picard justified in holding Rasmussen?