The worst part about this is that I found the title of this book several years ago, even tracked down a copy and read it, but it's slipped my mind and my prior queries don't seem to exist anymore.

I read this while in an Air Force base library around 2002-2006. The title has a man's name. I want to say it's "Charles" or "Charlie". The structure was something like "The Strange Case of Charles Monk" (name drawn entirely from fancy here). The main character is an agent of some sort — albeit one whose primary job is as an assassin — who maintains a cover identity as a painter. He's suave, good with the the ladies, and deadly. Except that he might also be a different sort of primate. The narrative alternates with stories about a primate (I think a chimpanzee, but it might be an orangutan) who's undergoing a set of experiments to improve his intelligence. At some point, the identities catch up with each other. The chimpanzee is convinced that he's a man who has been somehow transplanted into this body while the official line is that he is a chimpanzee who has been uplifted and convinced he is a man in an attempt to create a deadly assassin.

The only other scene which sticks out in my memory was the protagonist trying to escape a zoo enclosure and nearly drowning in the moat because he doesn't know that chimpanzees can't swim. He later uses his intelligence to find an alternate way across.

I think that the cover art involved a generic James Bond-ish silhouette on an otherwise blank background.

As I was about to save this, I decided to see if maybe my subconscious knew more than I thought and I tried searching for The Strange Case of Charles Monk and got The Discrete Charm of Charlie Monk which matches. The cover is right (showing a progression of chimpanzee to secret agent on a red background). The name is, indeed, correct, as is the title structure. And it does involve a mysterious agent with identity complications who at one point believes he's been stuck in a chimpanzee's body. I'm answering my own question so that I can look this up in the future the next time I forget. 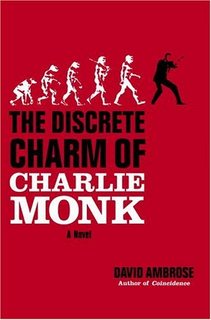 Not the answer you're looking for? Browse other questions tagged story-identification novel uplift or ask your own question.