What materials can Kitty Pryde not phase through? Could she phase through adamantium? Please provide citations to back up your answer to each question.

Kitty Pryde is a mutant with the ability to “phase” through solid matter by shifting her atoms through the spaces between the atoms of the object through which she is moving. Kitty can phase her clothing along with herself, and through practice has learned to phase other objects and people without harm to them. For all intents and purposes, Kitty is intangible whilst phasing, however she is still vulnerable to psionic or mystical attacks. Certain forms of energy can also disrupt her phased state.

And continues regarding the limitations of her abilities:

Kitty passes through objects at the same rate of speed at which she is moving before phasing. Since she is unable to breathe while phasing, she can only continuously phase through solid objects - as when she travels underground - as long as she can hold her breath. Kitty can keep her phased form at rest in relation to the rotation of the Earth upon its axis, thus allowing her to assume a ground speed of the length of a football field and a half every second. Kitty can also walk on air whilst phasing.

Marvel Wiki expands on this:

Phasing Limitations: Since she was unable to breathe while "inside" an object, she could only continuously phase through solid objects (as when she traveled underground) as long as she could hold her breath. Denser materials were more difficult for Kitty to phase through, sometimes causing her pain. Solidifying while in an object could cause serious injury if not death. As it is an active ability, if she can't see an attack coming, she can't phase through it, a fact that the mercenary known as Deadpool once exploited when he knocked her out (taking her by suprise) in order to provoke Wolverine into fighting him for his amusement.

The closest limitation to her power that would prevent her from phasing through adamantium mentioned might be the density of adamantium, but as discussed here, adamantium is not particularly dense.

The density of the material is the only known factor preventing her phasing ability. There is no evidence that Kitty Pryde would not be able to phase through adamantium.

In fact, during the Enemy of the State storyline, she successfully phased as Wolverine lunged, resulting in Northstar being stabbed. 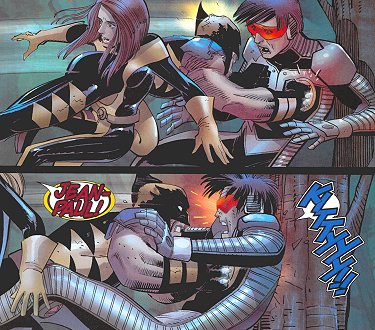 In the TV show Spider-Man and his Amazing Friends episode "The X-Men Adventure", Kitty Pryde is placed in a cell made out of Vibranium, a substance that is evidently able to block her phasing powers.

Kitty/Sprite : Hey, what's the big idea? (Bumps into the wall nose-first) Ow! What's this place made of?

Cyberiad : Vibranium, my dear Sprite. A metal that can vibrate to block your atomic structure. In other words, I've grown accustomed to your phase. (laughs maniacally)

Kitty/Sprite: What have you done? (hammers on the wall with her fists) 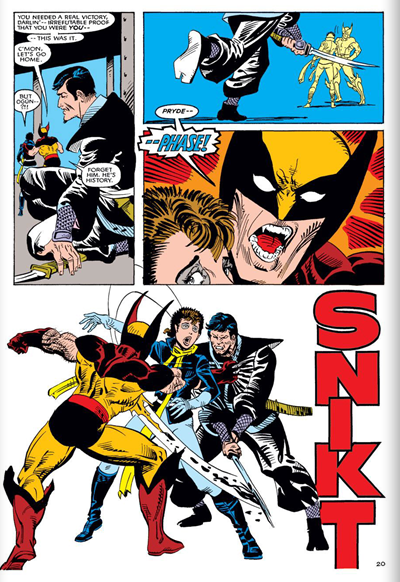 As to what materials Kitty Pryde can pass through, Kitty is described by the Marvel database as having more difficulty phasing through denser materials.

Since Osmium is considered to be the densest element, since Colossus is described as having skin comprised of an "ionic form of osmium" and since Kitty can phase through him with relative ease, it follows that she can phase through any non-magical/non-force-field-based substances with the exception of Vibranium.

13
Could the Muramasa Blade cut through Adamantium? What can't it cut through?
13
Why doesn't Kitty Pryde fall through the ground?
0
Who are the X-Men in X-Men Regenesis?
13
How old is Kitty Pryde in Earth 616?
25
How can Kitty Pryde achieve time travel with her phasing abilities?
4
How does Kitty Pryde know/learn to control her time travel power
4
Can Kitty Pryde phase through material attached to her (e.g. Toad's slime)
4
Are there other mutants with secondary powers?
28
How does Shadowcat keep her clothes on?