What is the title of this old interstellar travel guide?

I came across a book at a used bookstore about 20 years ago which I then accidentally sold. Long story. Anyway, I've been trying to find another copy for the last five years or so with no luck. I can't for the life of me remember the title.

I believe it was a black cover with the picture of a space cruise liner shaped like a swan on the front. It was very well made with heavy full color pages and a slick finish. It was about an inch and a half thick.

The book was written as if it was a travel guide by a company specializing in interstellar cruises. It covered their various packages and then delved into the various locations the cruises stopped, indigenous life forms and societies, etc.

One of the species you were to encounter were three-legged pod-like creatures which had no eyesight and communicated by smell. Another was a tall slender race whose advances in medical science had led them to do body modification and "plastic surgery" to the point that it was the focus of their culture. There was another planet which had tall crystal growths which were believed to be sentient.

Sounds strange, but it was a very interesting book. I loved the way it was presented. I'd like to get it as a present for one of my boys.

What is the title?

It looks a lot likee one of the Terran Trade Authority books from Stewar Cowley, most specifically "Starliners" 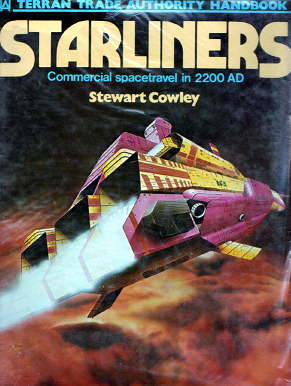 The ship that you remember is most probably the Galactic Queen from the TTA: 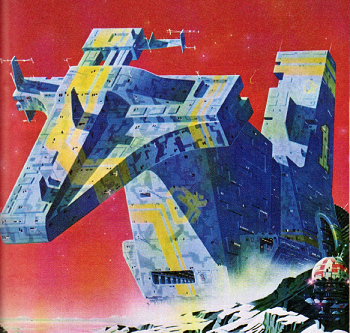 The book lists a series of "local" (coversing just a solar system, or a few years-light around it) or "global" (covering several hundreds of light years) shipping companies, accompanied by a description of the worlds that it touches and its inhabitants, and pictures of characteristic ships.

UPDATE: An slender version of the GQ (an "earlier" model) appears in another of the books (not in the front cover) of the series (Spacecrafts 2000-2100 A.D.): 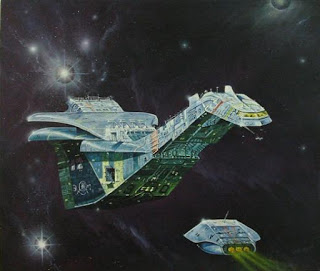 Found it! You’re looking for: 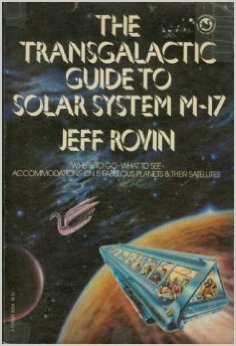 I was thinking of this today because I saw John Walker’s No Man’s Sky screen shot here:

and I said to myself, man that looks like an Alladis: 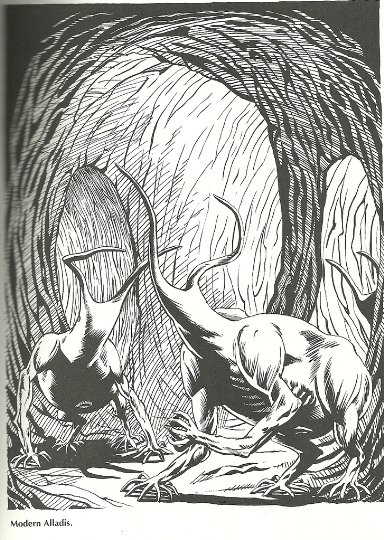 There were a number of books in this vein, aside from TTA books and Galactic Tours, it could also be:

Handbook for Space Pioneers (another edition with different cover here)

Tour of the Universe

And if you look at the "Customers Who Bought This Item Also Bought" section on amazon for other books in this style, some like Space Wars have lots of links, so you could just click around looking at different cover images for a while to see if you find one that rings a bell. 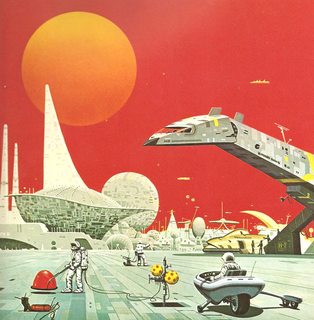 I've been searching for the title of a book that I used to check out from our little library when I was a child - I loved the book with the swan cruiser - so many space ships.

It wasn't a 'story' but a big collection full of different space ships that people drew - they were so beautiful, and full of imagination. I just had the urge to try to find the name of this book as well, and found your site here. 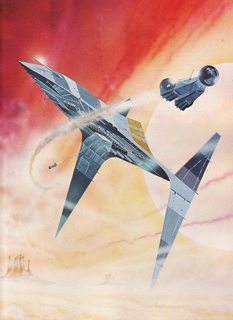 I believe you might be talking about the book, "Tour of the Universe". Edited by Malcom Edwards and Robert Holdstock. Published by Mayflower Books, NYC. Circa 1980.

IT's subtitled "Tour of a Lifetime". Google it and you will find it. Wonderful book which i have kept all these years. Great art. Very imaginative. There are even this cool passport stamps for each of the planets/locations visited.

8
Books describing different kinds of spaceships
10
What was that Sci-fi book mixing classic art and book excerpts to build a timeline of the universe?
4
Looking for an encyclopedia of alien ships from 70s or early 80s

7
What is the title of this Star Wars book?
9
What is the title of this superpowers movie?
8
Old time-travel story called “What Time Is It?”
5
Spherical spaceship containing the remnants of human civilization
22
Old short story about climbing the toughest mountain in the known universe
4
Looking for title & author. Earth has a gateway device for interstellar travel
36
Short story about interstellar travel gone wrong
7
Pre-90s SF book, four characters (including Elney, Fram and Lady Cleetha) crash-land on an alien planet and learn to survive
10
This book about space/interstellar travel, permafrost, biological androids and mind meld technology, identify