I'm looking for a science fiction short story I read many years ago. The storyline is a planet being observed for possibility of life and the conclusion is it is uninhabitable because of the 'poisonous oxygen clouds' around it. The twist is that it is an alien observing Planet Earth. Any ideas of author? I have tried all manner of permutations of keywords on Google etc, but drawn a blank. Thanks in advance.

This sounds like it could be Report on Planet Three by Arthur C Clarke; it's presented as a report (hence the name) made by Martians observing Earth, and goes through some key differences between the two planets from the perspective of a hypothetical Martian civilization, of one those differences being - of course - the oxygen in Earth's atmosphere.

Other differences called out include temperature, gravity, fire, water, and it all feeds into speculation about the possibility of life on Earth (which the Martians deem unlikely owing to "violent climatic extremes", among other reasons).

It ends with some discussion of the possibility of sending a probe to Earth and the unfortunate demise of the Martians in a nuclear war (which the feigned translator notes happened just at the same time as our "historical" Trojan War.)

Could it be "From Lava to Life: The Universe Tells Our Earth Story: Book 2" by Jennifer Morgan?.

There's a specific mention of "poisonous oxygen clouds" in the review...

Told from the Universe’s perspective, From Lava to Life gives an exciting overview of the emergence of life on Earth. It begins with bacteria’s rise in complexity as it develops into an eukaryote who is rescued from “poisonous oxygen clouds” by mitochondria. Familiar organisms like jellyfish and worms, as well as the fantastical other-worldly five-eyed Opabinia emerge from the primordial ooze. Animals, plants, fungi, and dinosaurs inhabit the earth until a meteor creates the first Great Extinction, an example of the centrality of interdependence to life on Earth. This disaster marks the end of a chapter in Earth’s history, and the book. 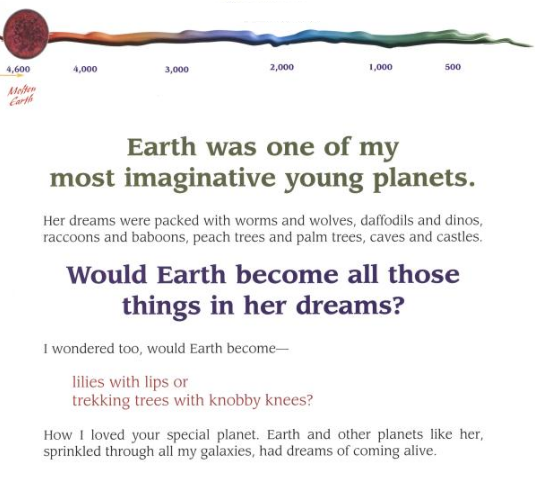 5
1960s short story, aliens accidentally set fire to the field they land in