Looking for a book: title contained a number (maybe), story was about a female humanoid operative

The book documented the adventures of a female humanoid being whose body was altered to enable her to be a message/document carrier as well as a highly trained military-esq operative when needed for an organization. One of these alterations was a concealed pouch within her own body where she could hide away secret documents and the like.

Though her line of work heavily discouraged close contact with other people, the story explored her experiences and conflicts in developing relationships. It also detailed her experiences and feelings being a top secret message runner and her internal struggle with being who she was/is and having that secret pouch.

I can't distinctly recall the setting of the story; beside the fact that the female character in question was normally always on the move (carrying and delivering the documents and protecting them at all costs), there seemed to be a mix of older/current history along with science fiction elements.

Doesn't match your idea of a number in the title, maybe you're associating it with "Friday the 13th." Other than that, it's got your female courier, with a pouch, working for a somewhat secret organization, it's heavily concerned with the title character's relationships with other people.

The picture below is the cover I've seen most often, the linked Wikipedia article has the first edition cover which I never realized was similar in style to "The Number of the Beast." 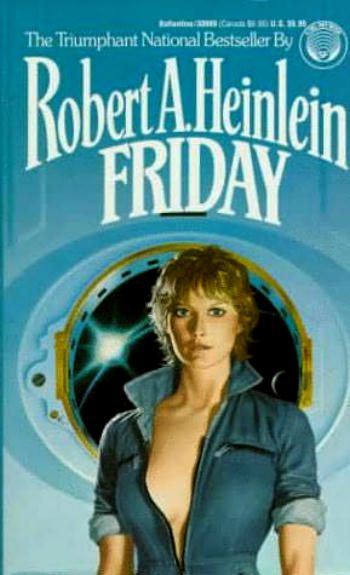 I think you're referring to Friday by Robert Heinlein

Friday is a 1982 science fiction novel by Robert A. Heinlein. It is the story of a female "artificial person," the eponymous Friday, genetically engineered to be stronger, faster, smarter, and generally better than normal humans. Artificial humans are widely resented, and much of the story deals with Friday's struggle both against prejudice and to conceal her enhanced attributes from other humans. The story is set in a Balkanized world, in which the nations of the North American continent have been split up into a number of smaller states.

And here's a quote from the book about her "possum pouch":

"But maybe I had better draw a diagram first. I have a 'possum pouch, created by plastic surgery, behind my bellybutton. It isn't large but you can crowd one whale of a lot of microfilm into a space of about one cubic centimeter. You can't see it because the sphincter valve that serves it holds the navel scar closed." 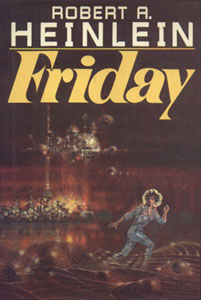 I can't find any particular reason why you'd think it had a number in the title. It was, however released overseas in multiple parts labelled Friday #1, Friday #2 and Friday #3.

Perhaps you are confusing some parts of Friday with Babel-17 by Sam Delaney which also has a female protagonist.

During an interstellar war one side develops a language, Babel-17, that can be used as a weapon. Learning it turns one into an unwilling traitor as it alters perception and thought. The change is made more dangerous by the language's seductive enhancement of other abilities. This is discovered by the beautiful starship captain, linguist, poet, and telepath Rydra Wong. She is recruited by her government to discover how the enemy are infiltrating and sabotaging strategic sites. Initially Babel-17 is thought to be a code used by enemy agents. Rydra Wong realizes it is a language, and finds herself becoming a traitor as she learns it. She is rescued by her dedicated crew, figures out the danger, and neutralizes its effects.

The novel deals with several issues related to the peculiarities of language, how conditions of life shape the formation of words and meaning, and how the words themselves can shape the actions of people.