Does the Enterprise D advance into different galaxies more than once?

In the TNG episode "Where No-One Has Gone Before" the Enterprise-D enters another galaxy. 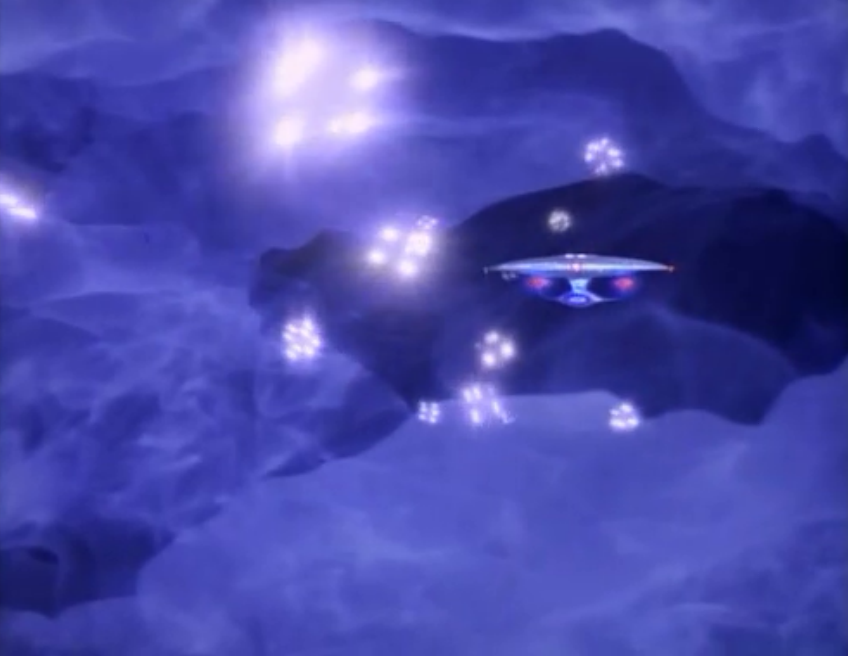 Does she ever go to another galaxy a second time?

Why am I aksing such a absurd question? The spoken opening text of TNG is quite different in the German translation. Translated back to English it goes something like:

Space - infinite vastnesses. We are in a distant future. These are the adventures of the new starship Enterprise, which is many light-years away from earth on its way, to discover new worlds, unknown lifeforms and new civilisations. The Enterprise thereby advances to galaxies, that no man has seen before.

Obviously the guy who did the German translation didn't know much about Star Trek, since travelling to other galaxies is, if at all, only a very minor part of what the series is about. But I grew up with this sentence and it made me wonder: Does the Enterprise D advance into galaxies where no-one (that is: no human) has been before?

For completeness, here is the original opening text:

Space: the final frontier. These are the voyages of the starship Enterprise. Its continuing mission: to explore strange new worlds, to seek out new life and new civilizations, to boldly go where no one has gone before.

And here is the untranslated German opening text:

Within the context of televised Star Trek, no Federation Starship has successfully traveled to another galaxy, with the sole exception cited of "Where No One Has Gone Before".

There is one occasion upon which the original NCC-1701 Enterprise attempted to leave the galaxy but failed ("Where No Man Has Gone Before") due to the "galactic barrier", and one where they successfully do so, breaking through that barrier ("By Any Other Name"), but they never actually reach Andromeda.

As a result, the closest thing to truly intergalactic relations the Federation could be said to have is that they offered to help the Kelvans ("By Any Other Name") send a robot ship to let their people know that the Federation were willing to help them find a home. The results of that mission are never detailed canonically, although Worf does claim to have fought Kelvans, once, suggesting that at least Rojan's expedition survives into the late 24th Century.

11
Is there any reference to intergalactic relations in Star Trek’s future?

36
Is the "Space, The Final Frontier" quote "in universe"?
27
Why was Enterprise on a five-year mission in TOS?
12
Why does Wesley Crusher have a different communicator than the rest of the crew?
11
Why wasn't there more timeline divergence in "Yesterday's Enterprise" than what we observed?
19
How long can a Galaxy class starship last before it needs servicing?
90
Was Voyager really significantly slower than the Enterprise-D?
9
How does the baby changeling transfer itself into Odo?
28
What's the history of the term "starship"?
91
In which episodes did the Enterprise boldly go where no one had gone before?
4
Does Geordi have more than one VISOR?