Looking for title of SciFi book, main character has 3 spots on his arm

Set on a future Earth taken over by an alien race. Humans reduced to prisoners/cattle? (memories of a bunch being kept in a fenced area ala pow's) The aliens have stripped most of the planets resources and are now turning to any buried refuse sites etc to remove all metals for their use.

I recall part of the plot where the aliens have a small base and are tunneling into a hill trying to reach what turns out to be an old army weapons cache. Our guy (human/ish) manages to get into the base through the hill? (not realising the value/use of the weapons crated up in the cave thing) where he finds a clinic of sorts where the aliens are force breeding the humans and modifying the offspring? He discovers he has 3 dots on his arm like the modified babies and must be one himself.

I think there are chases, fights etc that lead through radioactive hot zones so he can escape. Though I may be mixing this in from another plot?

Any assistance would be great, this has been nagging me off and on for years.

I have read a lot of the other queries on the forum also, but they are not what I am looking for, nor have I been able to help anyone else..... yet!

This is "Creatures of the Claw" by Douglas Hill.

Finn Ferral, the main character in the novel, is a young hunter in an isolated village at the beginning of the trilogy, but by the time this novel opens, he has crossed most of a continent and has met with many strange events and people. In the course of rescuing his foster father and sister, who were taken by Slavers, he has further honed his already-sharp tracking and survival skills, and he has learned much about the Slavers' operations and machinery.

But many things about them still remain a mystery to be uncovered as events in this novel unfold.

Finn is also a young man of somewhat mysterious origins. His foster father, Joshua, found him as a toddler wandering in the forest. In the previous novel, during a stay at the Slaver base, he found that the raised dots on his arm marked him as a product of the [clone vats?]. 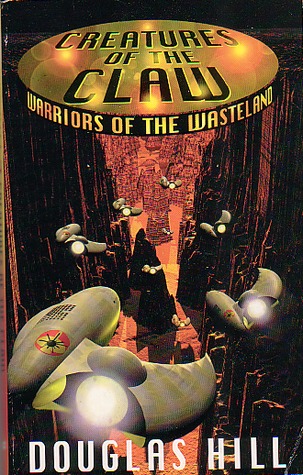 The blurb from the earlier book in the series mentions that the Earth's resources have been depleted...

Alien Citadel takes place on Earth, but on a future Earth that only barely resembles our own world. In this future world, humans live in fear, hiding from the Slavers, the planet's new masters. The planet is covered by desert wasteland, forested wilderness, and radioactive firesands where monstrous mutant creatures prowl. There is no more civilization and little hope. The Citadel, built underground in a mountain hideaway, is where the Slavers take those humans whom they spare for use as slave labor: child-bearingage women are used for breeding experiments, and the rest of the captives are used as laborers in the Slavers' mines.

As the novel opens, Finn Ferral has just travelled across a continent strewn with dangers. Slavers run rampant over the planet, scouring the land with heat weapons in their efforts to eliminate any humans and other "vermin" still infesting its farthest reaches.