I have a rather obscure question about the 'Starship-and-Sun' logo of the Galactic Empire from the Foundation Series of books by Isaac Asimov.

Is there an official logo that was produced by Asimov himself or on the cover of a book edition? I've seen lots of renditions that are all nice (including the one from Wikimedia below) but I would like to know if there is an official version.

I know this is a very odd question, and one that might not have an answer but I thought it was worth asking... 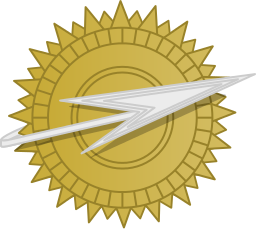 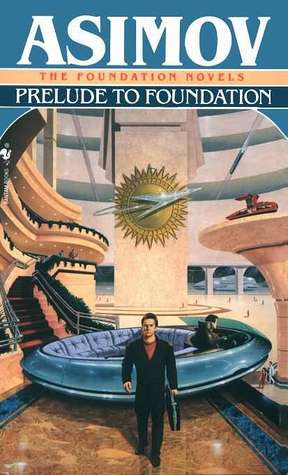 And if you squint, you can also see it on the cover of the 1991 edition of "Foundation and Empire". 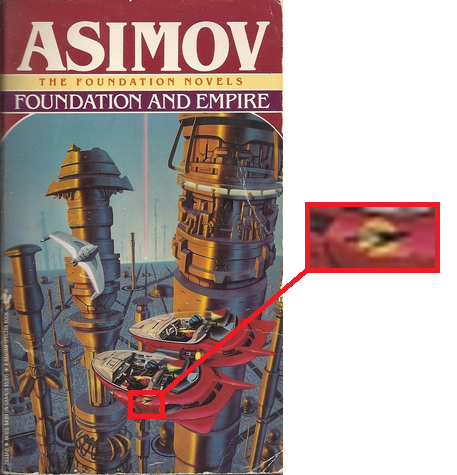 Since both books were produced during Asimov's lifetime, we can reasonably assume that he would have viewed and approved both cover images.

As mentioned by @SystemDown, the logo on the book-cover is only a partial match for the description in the books themselves;

There was only one thing in his mind. The golden globe with its conventionalized rays, and the oblique cigar shape that was a space vessel.

The Spaceship-and-Sun of the Empire!

To add to the trivia:

I happen to have this book: The Foundation Trilogy (1983) - in fact I'm currently re-reading it - and you can see on the cover artwork, on the "wing" of the spaceship (partly damaged by what might have been a laser blast) what corresponds at least in part to the description of the logo from the book (see a few posts back):

It would surprise me if this cover had been approved by the good Doctor himself though.

It would be fairly unusual for anything on a book cover, especially an older one, to be approved by the author. But if we're going by book cover art, the cover of The 1,000 Year Plan (1955) shows a uniformed man with what appears to be a representation of the sun-and-spaceship emblem. 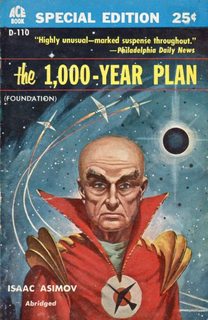 Not the answer you're looking for? Browse other questions tagged isaac-asimov foundation or ask your own question.

18
Does the Foundation from Asimov's novels have an emblem?

7
Are the Second Foundation trilogy and the Caliban trilogy considered Foundation canon?
0
Was R. Daneel Olivaw constructed on Earth, and is he alive in the last book of the Foundation series?
9
When did Asimov decide to unify the Foundation and Robots series?
3
Story of Bayta Darell and The Mule in Asimov's Foundation Series
7
Did Isaac Asimov give two or more unrelated characters the same name component in any of his science fiction stories?
8
Does Baleyworld feature in any of the Foundation Series books (perhaps under a different name)?
18
Does the Foundation from Asimov's novels have an emblem?
5
Parallels between Asimov's Foundation characters and real historical figures
6
What are the clues in Pate de Foie Gras that should enable the reader to figure out how the Goose made Au-197?
31
Did Asimov model the character of the Mule in his Foundation series on any particular historical person?