Why are Batman’s cape and cowl blue?

I understand that the bat logo on his chest is like a sigil, I understand that the yellow oval is to draw gunfire to the chest which is the only bullet proof part of his costume, I understand the purpose of the cape and cowl is to make him look like a bat and I understand that choice of black and grey as they make it easier to hide in shadows, what I don’t understand is the colour blue! Why does a guy who sneaks around in the night wear blue, and in some comics the blue is actually quite bright almost a sea green turquoise.

So why this strange choice of colour?

As you can see from the 1948 Batman #47 (Origin of the Batman), Batman wanted to create a suit that would "strike terror into criminals". He deliberately crafted an outfit in the style of a bat, decked out in a mixture of dark colours (blacks, purples and blues) that he feels will make him appear to be a "creature of the night".

His existing clothing in the previous panel consists of a black/blue jacket and dark trousers so these may be colours that he already favours. 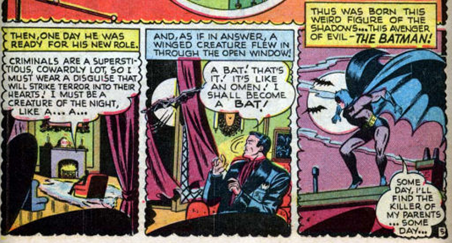 A near-identical origin story is seen in the earlier Detective Comics 033 - 1939 albeit with Bruce Wayne wearing a different outfit when he sees the bat. In that case, the bat itself is shaded in blue and grey...

The best explanations I've seen are that printing conventions (not to mention technology) in the earliest days of the Batman comics favoured the sparing use of black ink. Blue was used to create the impression of darkness without having to actually use fill colours. It was also used to highlight black areas where grey would look out of place.

You'll also note that those serials that are intended for younger audiences often favour a bluer palette whereas those that are for older audiences are literally darker with Batman in black.

As you can see from the (huge) diagram below, Batman's suit has changed colour dramatically over the intervening years but almost always with an emphasis on blue for the comics and black for the films where high-contrast materials work better.

Although it may be a total coincidence, the original dictionary that inspired the design of the Batman outfit was itself bound in heavy blue with yellow stripes. 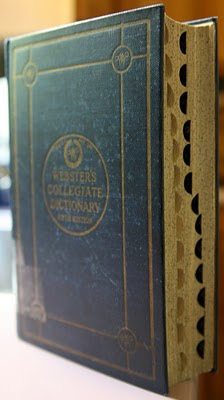 As it turn out a blue sheen on a black surface is meant to represent a glossy black surface in DC Comics (and possibly other comics) for example Superman's hair. As the years passed and printing technology improved this look was kept perhaps because it had become traditional. 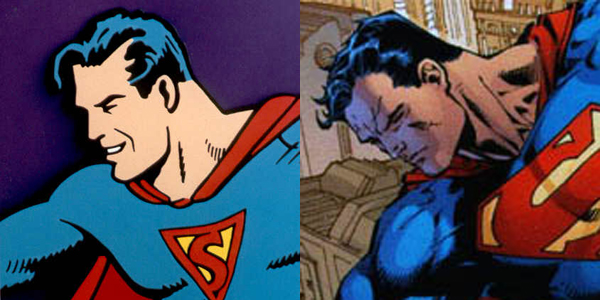 In old school Batman comics Batman's cape and cowl also had a similar blue sheen which indicated that they were black within the context of the story even though they appeared blue from the point of view of the reader.

The blue sheen look was made by colouring the majority of the area in with black ink leaving only the highlights uncoloured and then the colourist would eventually go over these areas with blue.

As the years passed for one reason or another the artists stopped filling in areas of the cape and cowl with black with a small area left to be coloured blue and the majority of the cape became blue, leading to Batman's light blue look from the 1940s to the 1990s.

But even though the cape and cowl appeared blue within the context of the story they were still black. In Batman #445 Alfred confirms that Wayne's costume is black and grey and not blue and grey. An interesting side note is that the yellow oval on Batman's chest was never yellow but was meant to be gold.

Batman's blue cape and cowl are meant to have been black they were just coloured blue with the assumption that the reader would understand they were black. 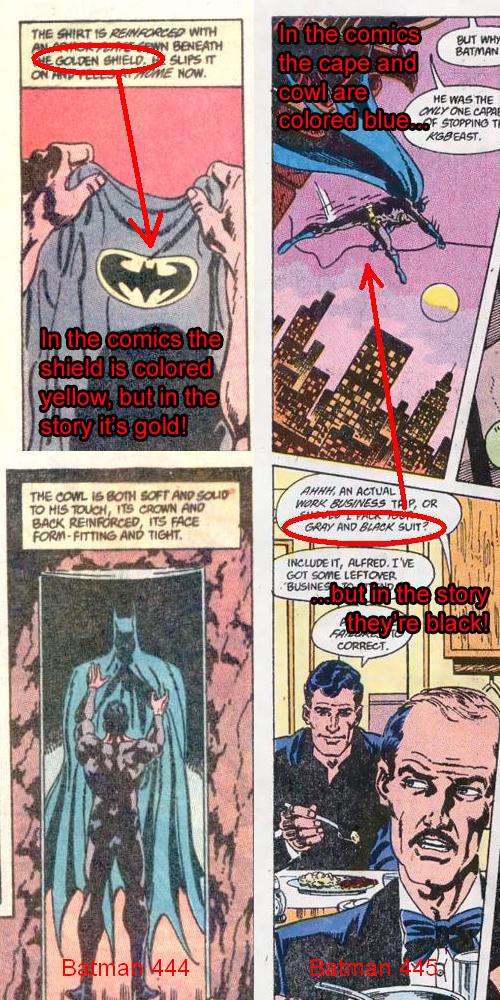 Batman himself gives the reason in the new frontier film when Superman asks this question. "Let's just say I wanted to scare criminals, not kids." -Batman This is the reason for the switch from black to blue. Blue is the kid friendly version of the batsuit in most cases.

2
Why is Batman dressed like a bat?
10
Was this scene of discovery of the Batcave from the comics?
-2
Blue Wolves in fiction

26
Why was Dr. Manhattan blue?
6
Why were the colours of Wolverine's costume yellow and blue?
21
Why are there so many different bat symbols?
8
How does Superman fasten his cape to his costume?
10
Why did Jonathan and Martha Kent attach a Cape to Superman's costume?
9
Why did Nightwing's costume change from black and blue to black and red in the DC New 52?
4
Why would Batman choose yellow for his utility belt?
14
When was the S emblem added to Superman's cape?
12
Did Batman use his cape to glide before The Dark Knight?
14
Has 616 Spider-Man ever had a cape?