Why does nobody want milk of the poppy?

I've been rewatching Game of Thrones and have noticed that everytime someone is offered milk of the poppy they refuse it, If memory doesn't fail me, some examples would be: King Robert, Jaime Lannister and Maester Luwin.

Why do characters refuse milk of the poppy? I thought it was some form of anesthetic? Does it have nasty side-effects? Can it make you die? Or is it just to make the characters look tough?

In the book, several characters do accept milk of the poppy. No less a person than Eddard Stark takes it, after he's attacked by Jaime Lannister in King's Landing towards the middle of A Game of Thrones.

I do remember several times in the books when characters refuse it, often because they need to have their heads clear for some reason. I think the show creates the perception that everyone is always turning it down because when people take it in the books, it's usually mentioned in the narration; in the show, that all gets cut because it's not that important to the plot.

"Milk of the Poppy" is simply a more ornate way of saying any opiate-based pain reliever in the G.R.R. Martin novels and televised adaptation of Game of Thrones.

As seen in this image below, the poppy flower will produce a capsule that is scored, and drained of its "milk", the opiate gum, that will be rendered down to produce heroin, hence the name "milk of the poppy". 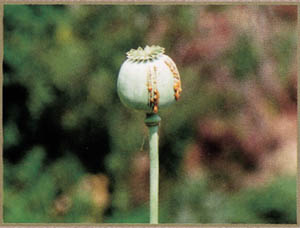 And like any opiate-based pain-reliever, "milk of the poppy" has several side-effects based on its use including dependence, memory-loss, and potentially lethal overdose. It makes sense only people down on their luck, with little left to lose, would accept it and its consequences long-term. People who valued mental clarity, if they were familiar with the side effects, would likely not risk any potential benefit seeing how many people fell to its many side-effects.

As one researcher has noted: "To understand the popularity of a medicine that eased -- even if only temporarily -- coughing, diarrhoea and pain, one only has to consider the living conditions at the time". In the 1850s, "cholera and dysentery regularly ripped through communities, its victims often dying from debilitating diarrhoea", and dropsy, consumption, ague and rheumatism were all too common. -- “In the Arms of Morpheus: The Tragic History of Laudanum, Morphine, and Patent Medicines”, by Barbara Hodgson. Buffalo, New York, USA. Firefly Books, 2001, pages 44-49.

Side effects of Milk of the Poppy

Milk of the Poppy indeed helps with the pain but it has very dire side effects if taken over a long period.

This is why some people prefer to bear the pain instead of going on Milk of the Poppy. King Aegon II's reaction to treatment by MOP after his second injuries taken against Lady Baela Targaryen was:

I shall not walk that road again.

The King was completely incapacitated due to MOP and regency passed to his rash brother Aemond, who made a string of mistakes which resulted in fall of King's Landing, Arrest of Queen Mother and Queen Consort, Death of Queen Consort and near-arrest of the King along with his Children. Aegon did not wish to let it happen ever again.

People who accepted Milk of the Poppy

People who refused Milk of the Poppy

People who refused further treatment on milk of the poppy

People who occasionally refused milk of the poppy

People who became addicted/tolerant to milk of the poppy

So as you can see, there is only once instance of a character refusing to take Milk of the poppy without ever have taken it before. That's Jaime.

Not everyone refuses milk of the poppy. In Chapter 7 of AFFC, Qyburn mentions that Gregor Clegane

is plagued by blinding headaches and oft quaffs the milk of the poppy as lesser men quaff ale.

Of course, Gregor is a "frothing dog" rather than a man who might actually want to have a clear head from time to time such as Ned Stark or Tyrion.

In addition to the other answers written about MotP being an opiate, I offer this: it is also a well known side effect of most opiates that they can cause very long and uncomfortable bouts of constipation. Being, uh... stopped up, so to speak, is an obvious and observable side effect that would be both uncomfortable and perhaps humiliating to have a condition for which they would require an additional cure. I'm fairly sure constipation is even mentioned once or twice in the books, so it's definitely recognized and understood to be a condition for which one with access might need a Maester.

There are a range of opiate (poppy derived) pain killers with varying strengths and addictivemess. They have sedative effects, and also suppress the breathing reflex and slow gut action. The issue with opiates is that many of them when taken by mouth are knocked out by an enzyme in your liver called cytochrome P450 before they can get to the rest of your body. Those that are eliminated in this first pass metabolism are classified as having low oral bioavailability. An example of this is heroin which must be injected. Other opiates have higher oral bioavailability and can be swallowed eg methadone, codeine, endone. Westeros as a pre industrial culture would have had a fairly primitive method of refining poppy sap- the drug produced would have been a crude mixture of opiate compounds . It certainly would have properties of pain killer but the correct amount to take would vary from plant to plant, region to region, season to season, even between the people who prepared the extract. so the side effects of mental sedation or unconsciousness , breathing suppression, intestinal paralysis, could not be predicted and were a very real risk.

The simple reason is trust yes its addictive being opium and clear heads are important in got. If you think The most rememberal person not taking milk of the poppy is Jaime that is because he is in the north where Lord Bolton is known to be with the Starks at the time no one knows of there deal with the Lannisters just yet but also the master has his chain striped of him. If your from the south that's enough reason in its self not to trust.

0
Why does every injured person in Game of Thrones refuse Milk of the Poppy?
7
Are there any recreational drugs in Westeros or Essos?

13
Why does Melisandre want to sacrifice Gendry?
1
Why are most of the main characters White/English in Game Of Thrones?
15
Why does everyone in Game Of Thrones have a British accent?
10
Do we ever find out who sent the catspaw after Bran in the show?
2
Are there any other unofficial House words?
17
Why this character is punished instead of being honoured?