I'm trying to remember an episode from the 1960's Batman TV show that I saw when I was a kid. I'm not quite sure who the villain was in the episode but I'm pretty sure it had Batman and Robin. The episode was about Batman, Robin, or both being stuck in a room made out of concrete (almost like a dungeon) and I believe they were stuck on some sort of platform that was getting smaller and smaller. There was some thing underneath the platform in water that would've killed Batman and/or Robin if they fell in (which of course, they didn't). Does anyone happen to know what episode this is?

Robin finds himself trapped on a shrinking platform over a crocodile pit. Batman rappels in and

saves him at the last minute. 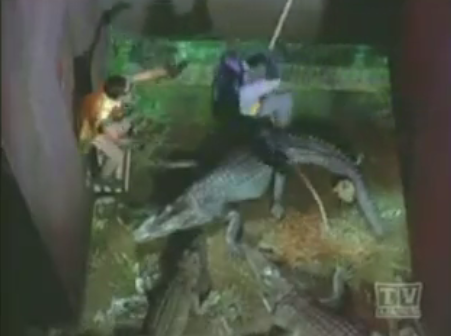 11
Which "Batman Beyond" episode has dream life simulation machines?
8
Gundam episode with scientists sealed in outer space, oxygen turned off
32
How many people have deduced Batman's secret identity?
11
Who are these classic DC characters?
10
How long has Batman been "The World's Greatest Detective"?
5
Searching for a Batman comic where Batman had no dialogue and Robin and Alfred were the primary characters
3
Australian TV show, The Magic Boomerang, cricket episode
7
Batman and Joker comic where they are compared to tarot cards and Batman gets stuck under a statue