I saw "X-Men: Days of Future Past" recently and because I don't read the comics was left with a few questions about the characters.

Bishop is a mutant from an alternative timeline whose mutant power is the absorption and redirection of energies directed at him. His mutant power will protect him from any kind of energy based attack but does not work against kinetic energy based weapons. The flaming mutant was Roberto DeCosta, also known as Sunspot.

In the canon Marvel Universe: 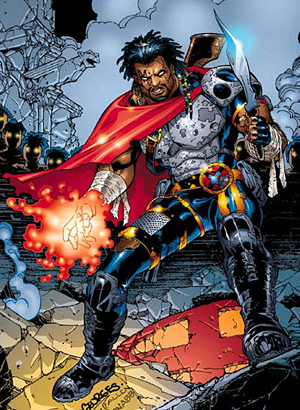 Bishop (Lucas Bishop) is a fictional comic book superhero, appearing in books published by Marvel Comics, in particular the X-Men family of books. Bishop was a member of Xavier's Security Enforcers (initially called the Xavier School Enforcers), a mutant police force from a dystopian future of the Marvel Universe. He traveled to the 20th century and joined the X-Men, a team he knew only as legends. A brash antihero, he had difficulty adjusting to the norms of the time period. After a decade and a half of acting as a member of the team, Bishop was instead portrayed as one of the X-Men's main antagonists.

Bishop is portrayed by Omar Sy in the 2014 film 'X-Men: Days of Future Past'. 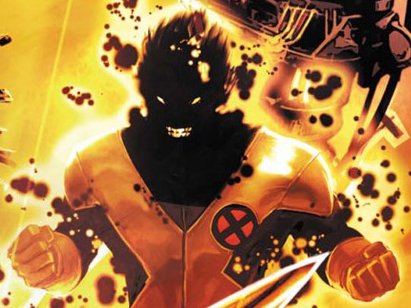 Sunspot was edited from his comic iteration and in the movie was able to project solar energy as a form of flaming plasma.

In Sunspot's original incarnation he possessed superhuman strength and durability. After being captured by Gideon and experimented upon, his powers included increased durability and the ability to project solar plasma.

Sunspot (Roberto "Bobby" da Costa) is a fictional character, a Marvel Comics superhero most commonly associated with X-Men-related groups the New Mutants and X-Force. An Afro-Brazilian mutant, Sunspot possesses the ability to absorb and channel solar power. He is idealistic and impulsive, but is considered a close friend of many of his teammates. He was an important member of the X-Men’s 1980s-era junior team and its reincarnation X-Force.

Actor Adan Canto portrays Sunspot in the 2014 film X-Men: Days of Future Past.

2
How many versions of Days of the future past exist?
27
What timeline is the post-credit scene at the end of The Wolverine in?
7
Trask arrested for selling military secrets in X-Men: Days of Future Past
11
Why would Mystique's DNA allow for Sentinels that can duplicate mutant powers?
19
Was President Kennedy a mutant? Or, did Magneto lie?
10
If mutants can travel in time, why do they not change more events?
0
How were Professor X, Magneto, Wolverine and Storm surviving the Sentinels?
4
Is the outcome of X-Men Apocalypse already known thanks to the ending of X-Men: Days of Future Past?
7
What species do mutants belong to? Are they still Homo Sapiens?