What are the visual differences between Boba and Jango Fett's armor?

Or, how exactly can you tell them apart? Is the armor completely the same except for the color, or are there some other differences?

Here is a nice side-by-side that illustrates all of the differences. 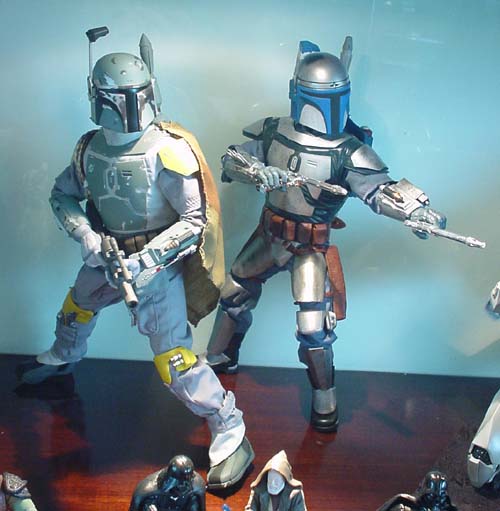 Jango (on the right) has fresher, cleaner, shinier armor due to it not being as old. Boba (on the left) has armor that is more weathered and scratched up, you can see that it's really quite aged. So just remember Boba is the clone of Jango and was raised as his son, meaning he's younger so he would naturally get he older armor that Jango once owned.

Keep in mind that Jango Fett's back story is that death watch basically kicked his faction of Mandalorians off the planet of those who weren't wiped out. After the rise of the empire I imagine Boba took steps in helping change his position.

His father (Jango) was part of a "neo-crusader" movement which opposed death watch, If they were wiped out by the rise of the rebellion that could explain why Boba wears the insignia of his home planet.

I'm not sure on all the details but in the expanded universe Boba becomes the new Mandalore (warrior leader of Mandalorians everywhere) and leads a new generation of Mandalorian warriors to mostly help the new republic, not that he hasn't tried to hurt them also.

In some other figures he has a single pistol on his back leg the type his father used. Perhaps he kept them or those pistols were the "no disintegration" demanded by Vader, Perhaps he had not changed weapons between then and his stay at Jabba's palace, or more likely he didn't need as powerful weapons while in a stronghold of a Hutt.

Jango Fett has front thigh armor and Boba doesn't. Also Boba has more advanced gauntlets that have a better laser volley and an ELECTRIC, steel cord plus everything his father had in the gauntlets. Boba also has built in knee darts, and the color is obviously different. Jango's armor is more shiny and less used and Boba's armor is more withered and dented. Also their helmets are much different. Jango's is more slim at the top while Boba's is large at the top. Boba's visor is also thin and Jango's is thicker. The antennas are also different. Also Boba wears another layer under his armor (sometimes). Its like a flak vest that's made of Krayt Dragon skin and can withstand a lot of damage. That's all, I think.

Collectible helmet made from the original mold. 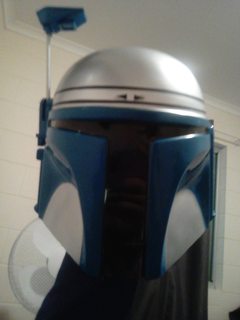 Jango's helmet is also noticeably longer, though I suspect he has multiple sets (Boba's green colour may even be a jungle-specific set of Jango's)

6
Are there any differences between the 3D versions of Star Wars and the previous ones?
1
What are Boba Fett's most prominent appearences?
10
What are the benefits of using the lightsaber you constructed yourself?
13
How do Clone Troopers tell each other apart in battle?
12
What are the significant discrepancies between the official novelization by Foster and the movie for The Force Awakens
4
What is Jango Fett's relation to the Death Watch in Disney Canon?