I'm trying to track down the story which I'd found very funny as a kid and wanted to pass it on my kids:

He appeared to be a spiv/tramp who had accosted a passer by and told them a fantastical story of how he had spent years wheeling and dealing/making money by moving stuff between worlds. Eventually he had gone broke due to losing tracking of which was the 'real' Earth - where all his money was- and was now destitute. He was basically begging for a pound to buy a cup of tea.

The nub of the story was that

he had not kept pace with the changes in the real 'earth' and when presented with a pound coin as opposed to a pound note, he instantly assumed that that is was one of the many that had had only minor differences. With that he wiggled his bottom and disappeared.

I'm pretty sure it was 2000ad as Tornado had already been subsumed by 2000ad in 1979 and the pound coin was not introduced until 1983. Also didn't ever buy Eagle - I only bought graphical comics from about 1977 to the mid 80s and Eagle was not published in that period I believe. It was part of the 'Future-Shock' series of short stories.

It was "The Startling Success of Sideways Scuttleton", originally published as a Time Twister story in 2000AD #327 but later collected in the Complete Alan Moore Future Shocks 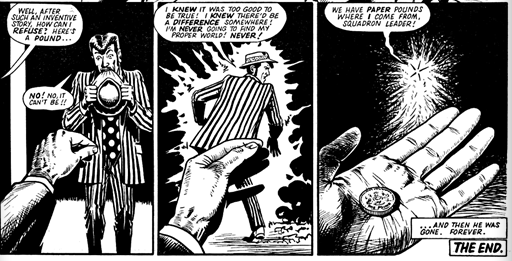 Not the answer you're looking for? Browse other questions tagged story-identification 2000ad or ask your own question.