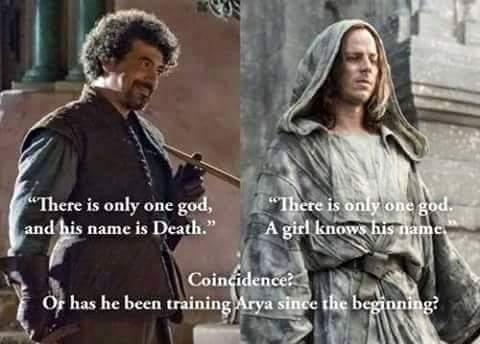 guyguy
11
Add a comment  |
Highly active question. Earn 10 reputation (not counting the association bonus) in order to answer this question. The reputation requirement helps protect this question from spam and non-answer activity.

39
How did Jaqen H'ghar get caught?

18
Who are the 3 men who would have a chance against Jaime Lannister in a sword fight?
90
Is there any proof that Jaime Lannister is actually a good swordsman?
20
Where did Ned Stark find Syrio Forel and how did he hire Forel to train Arya?
19
Why did Arya shortened her kill list so much in season 6? Or did she lie?
11
Who were the Kingsguard escorting Cersei?
19
Why are the Westerosi soldiers seen in small groups?
11
What was the name of the person that was Arya's first kill?
38
How many time has Arya actually used Needle?
15
Was the Hound accurate about Meryn Trant’s sword skills?
31
Why did Robert pick unworthy men for the White Cloaks?