What is west of the Sunset Sea?

This image from the Game of Thrones intro sequence shows the Sunset Sea and the lands to the west of Westeros.

But what exactly is west of the Sunset Sea? Has anyone ever traveled there? 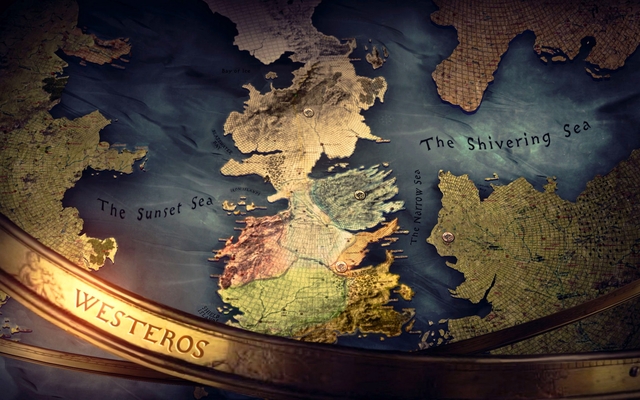 We do not know (yet)

No one has ever crossed the Sunset Sea to learn what lies on the other side.

So Spake Martin - Trade with Asshai.

The Sunset Sea is the great, unexplored ocean lying to the west of Westeros. Numerous explorers have sailed into the Sunset Sea searching for new lands, but save a few small islands located several weeks' travel west of the Iron Islands, nothing has been found, or at least no explorers have returned home alive to talk about it.

Since the Seven Kingdoms seem to be inspired by GB,it might be possible that the lands west of it are a pendant to america and are yet to be discovered.

The show and the books are in two different continuities as such the answers for both may differ.

The answer by @Shevliaskovic gives a good quote from GRRM about how dangerous it is to cross the Sunset Sea even stating that no one has ever succesfully crossed it.

Is there any trade between Westeros and Asshai over the Sunset Sea, or are those uncharted waters?
Over the =Sunset= Sea? No. No one has ever crossed the Sunset Sea to learn what lies on the other side.
Trading ships bound for Asshai go east through the Summer Sea and the Jade Sea, which are connected by the straights at Qarth.
The Citadel, So Spake Martin

We know of one example where someone has attempted to cross the Sunset Sea in the past; Brandon the Shipwright who tried but was never seen again. This event then led to Brandon the Burner putting torch to his fathers ships and ending the North's power at sea.

"Do you recall your history, Bran?" the maester said as they walked. "Tell Osha who they were and what they did, if you can."
He looked at the passing faces and the tales came back to him. The maester had told him the stories, and Old Nan had made them come alive. "...Theon Stark's the real thin one with the long hair and the skinny beard. They called him the 'Hungry Wolf,' because he was always at war. That's a Brandon, the tall one with the dreamy face, he was Brandon the Shipwright, because he loved the sea. His tomb is empty. He tried to sail west across the Sunset Sea and was never seen again. His son was Brandon the Burner, because he put the torch to all his father's ships in grief. There's Rodrik Stark, who won Bear Island in a wrestling match and gave it to the Mormonts. And that's Torrhen Stark, the King Who Knelt. He was the last King in the North and the first Lord of Winterfell, after he yielded to Aegon the Conqueror. ..."
A Game of Thrones, Bran VII

Lord Gylbert seems to believe that there are lands beyond the Sunset Sea though this could just be him guessing, rooted in stories or even come to him from a dream.

Lord Gylbert began to speak.** He told of a wondrous land beyond the Sunset Sea**, a land without winter or want, where death had no dominion. "Make me your king, and I shall lead you there," he cried. "We will build ten thousand ships as Nymeria once did and take sail with all our people to the land beyond the sunset. There every man shall be a king and every wife a queen."
His eyes, Aeron saw, were now grey, now blue, as changeable as the seas. Mad eyes, he thought, fool's eyes. The vision he spoke of was doubtless a snare set by the Storm God to lure the ironborn to destruction.
A Feast for Crows, The Drowned Man

The Ironborn themselves do seem to believe that there is something beyond the Sunset Sea but the maesters believe this to be pure speculation.

Among the ironborn, it is said that the first of the First Men to come to the Iron Isles found the famous Seastone Chair on Old Wyk, but that the isles were uninhabited. If true, the nature and origins of the chair's makers are a mystery. Maester Kirth in his collection of ironborn legends, Songs the Drowned Men Sing, has suggested that the chair was left by visitors from across the Sunset Sea, but there is no evidence for this, only speculation.
The World of Ice and Fire, Ancient History: The Dawn Age

However, Archmaster Haereg once believed the Seastone Chair to have come from the Sunset Sea before dismissing the idea as pure speculation.

Archmaester Haereg once advanced the interesting notion that the ancestors of the ironborn came from some unknown land west of the Sunset Sea, citing the legend of the Seastone Chair. The throne of the Greyjoys, carved into the shape of a kraken from an oily black stone, was said to have been found by the First Men when they first came to Old Wyk. Haereg argued that the chair was a product of the first inhabitants of the islands, and only the later histories of maesters and septons alike began to claim that they were in fact descended of the First Men. But this is the purest speculation and, in the end, Haereg himself dismissed the idea, and so must we.
The World of Ice and Fire, The Iron Islands

The maesters themselves even acknowledge that they know nothing about what lies beyond the Sunset Sea.

Sadly, the Citadel's knowledge grows thinner the farther we travel from the lands that the men of the east call the Sunset Kingdoms, for congress with the more distant realms of Essos has ever been sparse. We know even less about the southern reaches of Sothoryos and far Ulthos, and nothing at all about whatever lands may lie beyond the Last Light and across the Sunset Sea.
The World of Ice and Fire, Other Lands

The only canon maps we have are those in The Lands of Ice and Fire and as far as I can tell these do not include anything beyond the Sunset Sea.

There are various sources that claim the Iron Islands have ruled over the Sunset Sea for centuries and used it to travel around certain parts of Westeros; including Euron Greyjoy. However, it seems to me that these sources mean only the parts of the sea that are near Westeros and not that they have explored too deeply into it.

I haven't been able to find any information in the show about what's west of the Sunset Sea. However, I have found an article by Elio that discusses the image in your question. Unfortunately he doesn't go into any detail about what is to the west.

Best of all, the article is heavily illustrated with concept art and high-resolution stills from the sequence. Plus, the highest resolution glimpse at the map that includes Essos ... including Essos’s eastern coast, on the opposite side of the Sunset Sea.
Game of Thrones, Art of the Title Interview

Lady Crane and Arya have a conversation about this and say no one knows.

ARYA: Essos is east and Westeros is west. But what’s west of Westeros?

ARYA: Nobody does. That’s where all the maps stop.

LADY CRANE: The edge of the world, maybe.

And later in the final episode Arya leaves to go west and mentions to those present no one knows what is there.

Jon: You think anyone will dare tell you women aren't allowed?

Arya: I'm not going back north.

Jon: Where are you going?

Arya: No one knows. It's where all the maps stop. That's where I'm going.

Beyond that there doesn't seem to be anything about the west in the show.

if you zoom in on the new continents you can see red dots, just like those in westero that mark cities on the map, so there are cities too.

5
What is west of Westeros?
39
How is canon determined for the works set in the world of ASOIAF?

106
What is a "year" in Westeros?
33
Why are there no maps of lands east of Westeros in The Game of Thrones?
43
What is the shape of the world of Westeros and do the Westerosi know?
24
What blinks in the "Game of Thrones" intro?
17
What's the ball of light in HBO's Game of Thrones intro?
8
Why are these members of the Brotherhood detained at Eastwatch-by-the-Sea?