I read this in the 1980s or early 1990s. However, I don't know how old it was at that time. In the book Earth is visited by a large cylindrical spaceship (think L5- or Rama-like living space) inhabited by evolved dinosaur "humanoids" in one half and unevolved Jurassic era dinosaurs on the other half separated by a giant wall. It is not the book Toolmaker Koan as the plot description is different. Also, in Toolmaker Koan from what I can tell the evolved dinosaurs were technologically advanced whereas the evolved dinosaurs in this case were stone-age level technology or so. I have also read and confirmed it is not Day of the Dragonstar by David Bischoff nor Homecoming by Barry Longyear. It is not West of Eden by Harry Turtledove as it occurs in space.

PLOT DESCRIPTION In the story, an Earth delegation visits the spaceship to speak to the evolved dinosaur humanoids. A number of scenes in particular stand out on the visit:

I know for sure this is not the Rama series as I am very familiar with the plot on that. Nor is it the other books I mentioned.

I found it. I was correct, it was not Day of the Dragonstar. HOWEVER, at the time I wrote the question, I was not aware that it was the first in a trilogy.

The book I was seeking is the 2nd in the trilogy; The Night of the Dragonstar. 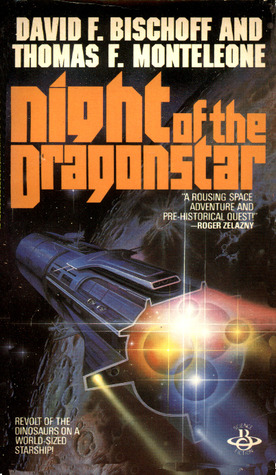 Not the answer you're looking for? Browse other questions tagged story-identification spaceship dinosaurs or ask your own question.

4
Looking for a space movie with an alien artifact bomb
2
Lizards with advanced intelligence (dinosaurs) in a cylindrical spaceship flying towards earth
5
1990s anime with Spaceship shaped like a white dragon and has guardian manned robots?
15
Short story in which a spaceship explosion becomes the star over Bethlehem
34
Short story with spaceship and humanity not realising they should be on it
18
Who wrote the first SF story in which a time-traveler went back to the days of the dinosaurs?
5
Older SciFi Movie: Marooned rocket crew battles hostile humanoid natives
12
Story about a tree that releases spores that destroy a species' appetite